The next catalyst for GDX

I've been pretty negative on gold miners (GDX), both because of the perceived weak hands involved on the long side and the terrible capital allocation policies/rising breakeven costs of the miners. At the risk of falling into confirmation bias, the recent articles about renewed gold hedging could be the next catalyst for further gold weakness (this month's strength notwithstanding).

While the exact magnitude and effect of such selling may be difficult to predict, it is something that I believe will grow in intensity the longer gold stagnates and/or remains volatile. Taking the analogy of a new speculator who has taken multiple large illiquid long positions (and indeed higher forward buying), gold miners would rather not lock in mediocre profitability (or indeed loss) going forward. If the analogy holds, the components of GDX will hedge more if/as gold falls more as the pain grows, exacerbating the fall and creating that reflexivity that Soros speaks of.

To recap: miners have been slowly eliminating gold hedges as gold prices rise, perhaps exacerbating the rise itself. 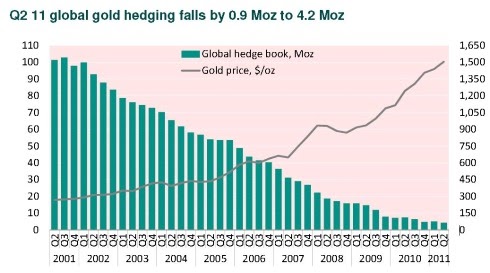 What if this tide turns? Given that marginal all in cash costs for the gold mining industry (which includes capex) is at roughly 1300/oz and growing, there is little room until losses. Cash costs ex capex (or variable cost, a la economics) at roughly 1100 is the level when firms theoretically stop production. But do they actually stop?

This is not to say that GDX will fall to new lows tomorrow - but there is a parallel here to prisoner's dilemma for gold miners. Given gold weakness over a year, the first ones to hedge above 1100-1300 will lock in okay results, but those who don't could see the effects of the first sellers...

*Note to be fair: the effect of such selling is a key point that I haven't been able to figure out: when the quarterly volume of gold traded is in the ft.com/intl/cms/s/0/eb342ad4-daba-11e0-a58b-00144feabdc0.html#axzz2bmE113l6" target="_blank">billions of oz., millions don't seem too bad. Relative to annual production (50-100mm oz), those same millions do look sizable.

Disclosure: no position now, but intend to short GDX later this year

Lessons From a PE Superday
+57by Mr. Manager
Attractive colleague - advice needed
+55OFFby IncomingIBA1
Caring for terminally ill parent while in IB
+39IBby divep63062
What would you name your MM Bank?
+35OFFby 1st Year Analyst in Investment Banking - Mergers and Acquisitions">Analyst 1 in IB-M&A
What the F are we all doing?
+31IBby ell29
It's time to rein in Big Tech.
+26OFFby icm9823
What are your thoughts on living in SF?
+23IBby Prospective Monkey in Investment Banking - Mergers and Acquisitions">Prospect in IB-M&A
I farted and my coworker smelled it
+21OFFby 1st Year Analyst in Investment Banking - Industry/Coverage">Analyst 1 in IB - Ind
Q&A - I'm a Non-target who broke into MM IB with no prior experience
+18by ValueBanker14
do you like music?
+18OFFby lilyyyyyyy
END_OF_DOCUMENT_TOKEN_TO_BE_REPLACED