What Nations Were Affected the Most by FTX Collapse

A report on the nations impacted by FTX's collapse was released on November 20 by neutral bitcoin data source CoinGecko. If you didn't know, the exchange that filed for bankruptcy was FTX International, not FTX US. Comparatively speaking, Asian countries are more impacted because the majority of FTX International's clients are based there. 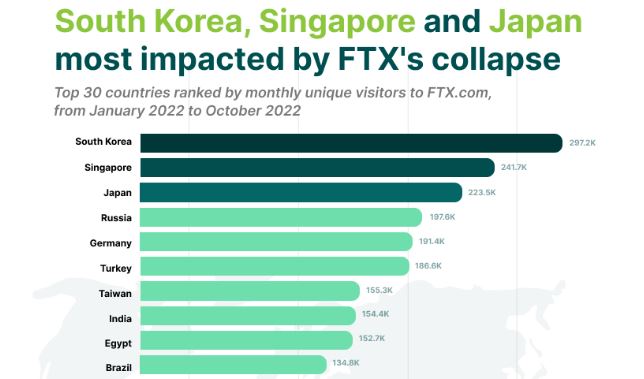 Top 10 Countries Affected Most by FTX's Collapse (Extract from CoinGecko) ​

The top 30 countries most badly impacted by FTX were determined in the CoinGecko analysis using monthly users rather than the total amount of money consumers lost in each country. The report finds that South Korea, Singapore, and Japan were the nations most badly affected, with a combined 15.7% traffic share to the exchange.

According to CoinGecko, South Korea had the most monthly users, with an average of 297,229 unique visitors per month to the exchange and the greatest traffic share of 6.1%. The Digital Asset Basic Act will be put into effect by the South Korean government as a scheme to control cryptocurrencies.

Singapore came in second with 241,675 monthly users, or 5% of FTX's overall traffic. The newspaper claims that a switch to FTX occurred as a result of Binance's closure in Singapore in December 2021. Japan has the third-largest user base, with 223,513 unique visitors from that nation accessing FTX on a monthly average. Early this year, SoftBank, a large Japanese investor in FTX, committed $100 million. Taiwan and India were also among the top ten, and more than 25% of FTX users were from the top 15 Asian nations.

Today's crypto market has been down due to ongoing concerns over FTX contagion. At the time of writing, the price of bitcoin is $15602.4, down 3.22% from the day before. Ether's price has also decreased in the last day, falling to $1082.6, or 4.25%. A large number of additional altcoins are also under jeopardy. The bear market may be just getting started as