Major U.S indices ended last week on a down note, as macro data along with the Delta variant spooked investors. The Nasdaq lost 0.87%, the Dow fell 0.78%, and the S&P dropped 0.77%.

Markets get cold sometimes, but temperature is something you'll never have to worry about with Miso Robotics AI kitchen assistant. Check out "Flippy", their robot, and you'll see perhaps the only thing in the world that makes a better burger than Gordon Ramsey.

U.S PPI - I would hate to be a dollar bill right now, as inflation looks like its going to continue kicking ass for some time. U.S PPI rose 0.7% in August as opposed to the 0.6% expected, as supply chain disruptions persist. I'm pretty sure it's been like 10 years since the pandemic began, but the lingering of other variants and interdependence of the global economy points to signs of a slow recovery for these supply related issues. Luckily for us, the most impactful price increases appear to have come on things we don't really need, like food rising 2.9% and transportation up 2.8%. Inflation isn't good for anyone, but asset classes do not all suffer equally, so we could potentially see a rotation away from inflation impacted assets like fixed income and into more resistant sources like defensive stocks, real estate, or even BTC.

Apple vs. Everyone - You'd be hard pressed to find a company like Apple that hasn't had some kind of beef in its past, and even harder pressed to find a company that stared the giant in the eyes and won. Well, just last week, a bunch of companies made it to the "we beat Apple" list. While Epic games is most notable, the likes of Spotify and many smaller developers are rejoicing too. The gatekeeper of iOS was ordered by a judge to allow app developers to create a bypass for in-app purchases and send users to their own private paywall, cutting out Apples 15-30% commission. However, we know Tim Cook doesn't take Ls, and this was definitely not a complete win for developers. Apple is still allowed to maintain the 15-30% fee and was not deemed as running a monopoly. So, really it's a half-W, half-L, meaning we'll have to meet in the middle and call this one a Q for everyone. 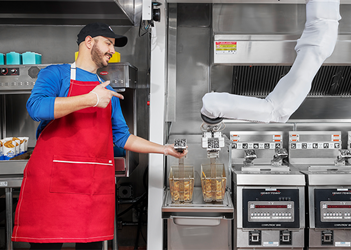 Miso Robotics uses a cloud-connected AI platform to help autonomous robotic kitchen assistants perform tasks such as frying and grilling alongside chefs in a commercial kitchen.

In fact, Miso Robotics is working with 10 of the top 25 brands in the QSR industry with dozens of pilot programs underway!

Affirm Holdings ($AFRM) - Shares in the "too-broke-to-pay-full-price" payment services firm, Affirm, soared 34.4% on Friday after earnings came in solidly under expectations. Don't worry, you read that right; Affirm reported a GAAP loss of $0.48/share on $262mm in revenue as opposed to the expected $0.29/share loss on a top line of $226mm. Since investors no longer care about money, the firm's 5x increase in registered merchants using the service stole the show.

Facebook ($FB) - Okay, yes, Zuck and crew only moved 0.18% on Friday so not exactly too "Ripe", but apes, we have to talk about this. Facebook has released the latest iteration of AR/VR glasses to the public, and unlike those from Google and Snapchat, theirs doesn't appear to double as contraception. A partnership with Raybans will help with that I guess, but just in case the company's products didn't run enough of your life already, now you can wear their newest product right on your face all day long!

Am I Crazy To Leave a 500K Job for Consulting?
+306COby Associate 3 in S&T - Other
Goldman 13 Whistleblower is son of Vice Chairman of TPG
+194IBby raindroppropshop
Unsure what to do about GF - Need Advice.
+157OFFby RE-Analyst
I literally just lost my internship to a blonde girl from Greenwich :(
+151OFFby Intern in PE - LBOs
Biggest Fraudster you know or have heard of
+126OFFby ironman32
Prestige Rankings Thread - PE firms
+124PEby Analyst 1 in IB-M&A
Banking to Military
+92IBby ceasarthebeast
What are you most excited about in life?
+86OFFby Isaiah_53_5 💎🙌💎🙌💎
Is IB impossible for me now?
+83IBby non-targetPhDstudent
Car Ideas for Mid-20s Guy
+76OFFby Associate 1 in RE - Comm
END_OF_DOCUMENT_TOKEN_TO_BE_REPLACED