I am lucky enough to say that I've gotten into all four schools listed above. I personally am not set on finance at all and am looking to ideally work in the Startup/ VC space. I plan to study applied math/ econ/ CS at all of the schools--other than Wharton, where I will study finance and double major in CS.

TBH, I really really love Princeton. It's one of my favorite schools and the academics are probably the best in the world. I don't plan to go to grad school, so strong academics are important to me. Harvard is nice, but I've interned there, and tbh, it's not all that. Also, I hate the way the name changes people's perception of you. Like when I say I've gotten into Princeton, people think that I'm decently smart but Harvard is put on such a pedestal that it makes me gag. Harvard people make it basically their whole personality, which to me is so odd.

Wharton and Columbia are out of the picture I think, just because wharton, despite being the best business school, doesn't have as strong academics and non finance alumni connections compared to the other schools. As for Columbia, I don't love the city too much.

Princeton is looking to be my top choice but am I making a mistake not picking Harvard? Thanks!

If you love Princeton so much you should just go for it. It sounds like your heart has already made the decision for you

Go for Harvard (Econ), and take classes at MIT (CS) on the side by cross-registration.

Go where you like most. During the college selection process, everyone tries to convince of going to one school over another because of their personal preferences. College is one of the last times in your life where you have multiple great choices about how you want to spend a large portion of your life. All of these schools are great and I have close friends that have placed into incredible shops across the IB/PE/VC spectrum from each one of these schools. Good luck in your decision and most importantly, have fun and work hard wherever you end up.

Harvard. Easier to get A's (they have grade inflation there), so you'll be less stressed and have a better time socially

Jesus. What are the odds that anyone gets into all four? That's insane man, congratulations. I would agree with the above posters, it sounds like you have your heart set on Princeton, and if you want to go into a non-finance area you really can't go wrong. Only downside is that Princeton is notorious for being one of the hardest colleges to get good grades it.

This guy is the inventor of regenerative human limbs - he really knows it all. 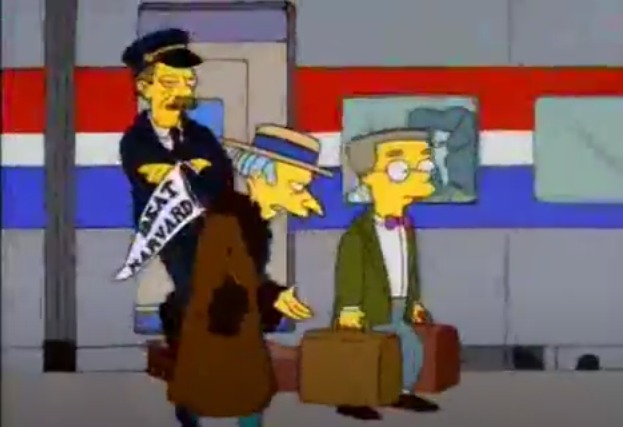 Harvard. You can take classes at MIT as mentioned above. No better combination out there. You can be the change you wish to see and NOT make it your whole identity.

My older brother is like you a freak above the rest of us ( im jealous you did awesome bro) and he got into every school he applied; Harvard, Princeton, Stanford, MIT, Columbia, and Binghamton (lol idek y)Anyways he went to Stanford bc of their awesome culture and weather tbh. He saw it as a place to make a name for yourself bc its the birthplace of startups while the IVY's are all places where ppl with names have been there for years. He doesn't find it pretentious or anything but you just have to know him he to see Stanford was his best fit. Anyways my parents where disappointed at first and thought he should have went to Princeton bc they viewed it as classical one of the best and they thought Harvard wouldn't fit him and my parents have a weird thing with Princeton. He never visited any schools but Stanford worked out for him as he did it in 3 years with a bachelors in CS specialist in AI and advanced algorithms, 4.0, yadda yadda yadda and now works at Citadel as a quant but is doing very very well there which i hear is rare for first years. Anyways this story wasn't ment to flex my brother but to say follow your heart which seems you picked PRINCETON!!! ( my parents would be so proud) like my brother did with Stanford and you will do great aslong as you keep the mentality and grind that got you there. Best of luck dude and i hope you enjoy Princeton if you choose to go

Ps. Columbia its dogwater compared to your other choices for finance soo good choice

Like when I say I've gotten into Princeton, people think that I'm decently smart

Who the fuck are you talking to?

Harvard grad here.  I don't even list it on my CV anymore because the school is filled with raging lunatics now.

But u went to Huhvard

Curious if you are willing to elaborate more.

The undergraduate student body have turned into a bunch of whinny shitheads who complain about everything and do nothing.   I was in Boston a few months into the pandemic and went to an event that was hosted by a club off campus and a bunch of students showed up to protest the fact that the event was even happening during covid.  I wanted to go to a window overlooking the crowd and piss on them.  But thought better of it because they would likely consider it a terrorist act and try to have everyone arrested.

Feel free to protest what you want to, but for fucks sake get a grip on reality.

That and the number of blue, green, purple haired people on campus has reached an unmanageable level.

Update, I also ended up getting into stanford and went there!

Update, I also ended up getting into stanford and went there!

My sister has a degree from there and I visited the campus and the area. I think you made the right choice.

Are a lot of people on this website on the spectrum?
+137OFFby FlyingRunningJumping
Favorite book
+86OFFby its-accrual-world
Being polished
+65OFFby tossed aligator
How to live longer
+57OFFby earthwalker7
To those in their mid to late 20s approaching 30, why are you living alone?
+52OFFby Pizz
WSO Quality-We Need Age Limits
+46OFFby Champagne Sipping
WSO Book Club MMTG Part 2
+44OFFby kellycriterion
Would you date a girl who makes more than you?
+30OFFby EgoManiac11622
If you could move and work in 1 city in the South, where would it be?
+29OFFby TunaTrip
Subway vs. Uber/Lyft
+26OFFby its-accrual-world
END_OF_DOCUMENT_TOKEN_TO_BE_REPLACED