Anything changed after Occupy Wall Street movement? Was that movement a joke? Wall Street is unbeatable, right?

Hey OccupyWallStreet, I'm here to break the silence...any of these links help you?:

Fingers crossed that one of those helps you.

I kind of believed that the powers that be in the US got really scared around 2009-2010 that a populist revolution was going to rise up and slit their throats. People were out in the streets demonstrating against corruption on Wall Street, the post-9/11 police state, and the Iraq War. You had these sentiments generally take the shape up of Occupy Wall Street and the Tea Party.

Now, in their early days, OWS and the Tea Party were very different than what they'd be remembered for, but broadly speaking, I'm going to identify them as the precursors to the Bernie Sanders and Donald Trump movements. Both were populist, highly suspicious of elites / institutions, and both seemed genuinely grassroots. Early Occupy Wall Street was very much a mean, blue-collar "fuck bankers" movement (and not the soy hippie commune it later became), and the Tea Party was originally a huge fan of Ron Paul and highly skeptical of state and corporate power (and not the front for state and corporate power it later became). Both movements were opposed to the War on Terror, too.

The PTB got nervous here and set about to sabotage both movements. They destroyed Occupy Wall Street with woke crap (by getting most of corporate America on board, because after all, corporate corruption is fine as long as Blackstone has a gay pride flag and says black lives matter), and it became a disorganized mess of lunatics and drug addicts. They convinced people that their real enemy wasn't the corrupt state-corporate power nexus, but conservative, working-class white people.

Meanwhile, the Tea Party quickly became the Tea Party™ and any semblance of Ron Paul libertarianism and anti-government sentiment was quietly purged and replaced with what might as well have been a redressed neoconservative hoodwink. Opposition to immigration was suppressed because it was "bad for business". Non-interventionism was suppressed because they had a bloodlust for Iran and keeping the money flowing to Israel. Being suspicious of corporate power turned into corporate bootlicking where people excused the obviously shitty and illegal behavior of various conglomerates because to do anything about it would be "socialist".

Now that said, I think the decline goes back much further than 2008-2010, but I think that's when the shift became more noticeable. Things definitely became more unhinged right around that time.

Funny how you worship blue collar/white working class Americans and vote for Ron Paul.  That means no Medicare, Medicaid, Social Security, workplace safety, health insurance, and of course the braindead gold standard.  Those very same people would be dying on the street.

Not sure where you derived I voted for Ron Paul from. You are bad at reading.

Ron Paul libertarianism was just one manifestation of populism in response to the financial crisis.

Also, I don't worship anyone. However, unlike you, I actually respect the working class of this country and don't have a bloodthirsty death wish for them like you do.

Ah yes, "bloodlust" for Iran. It couldn't be Iran's stated desire to murder millions of Jews; it must have just been bloodlust for brown people.

...you both missed the point and proved it.

You're 100% correct - the antagonism towards Iran was entirely because it was a regional enemy of Israel. And because of Israel's incredibly disproportionate influence on American foreign policy through groups like AIPAC which are well funded by every other billionaire around.

(that's also why we invade Iraq)

Regardless of who is the more warlike one, neither group has the wellbeing of Americans as their priority.

Nothing seems to have changed materially in favor of the movement.  To me, it seems to have gotten a lot worse with continuing consolidation of corporations and financial institutions as well as wealth in general.  I think we should make as much as we can while we can before there's no chance for people to become wealthy without being born into it, as I strongly believe that's where our country is headed.  It's both sad and upsetting, and I don't think there's much that can be done to stop it. 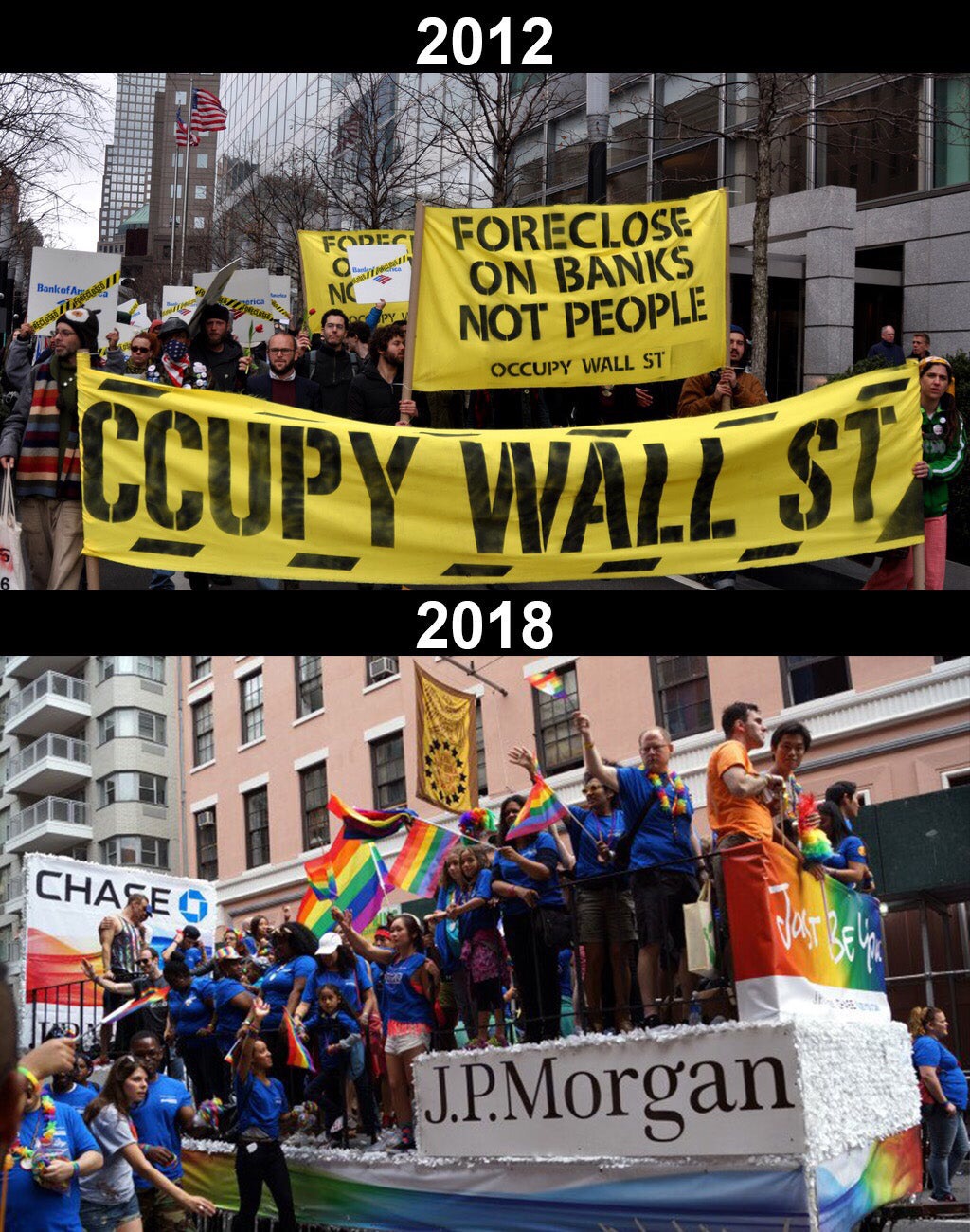 What's the idea behind this?  Banks got gayer to stop people from protesting?

Corporate America realized that instead of actually working towards improving the lives of working class people, they could disarm their harshest critics (the left, at the time) by going all-in on wokeism. It allowed neoliberal Professional Managerial Class types to satiate their liberal sensibilities ("i'm a good person, I support good things") without actually costing anyone any money. So you can go to work in BigLaw and defend a multinational corporation from a lawsuit claiming that they dumped toxic waste on Brazillian kids during the day, and go home at night and feel like a great person because you support LGBTQ+ or you made a #BLM post. Or you can work at a PE firm that just laid off hundreds of people after an acquisition (synergies!) and feel great anyway because you've signaled your support for your firm's Diversity and Inclusion initiatives.

We need a more diverse, more inclusive set of people holding the whip.

Yeah, the movement morphed into "Occupy Democrats" and just today announced support of landlords evicting non-vaccinated tenants. People are revolutionaries until their own people get in power and then they become supporters of the system.

I think it was the precursor to the ridiculous AOC/Elizabeth Warren/Bernie Bro shit you see now. Populism in all flavors is filth...

Why do you hate poor people so much?

Why is "populism in all flavors" filth? Should American politics be two classes of elites jockeying for power? Elitism in all flavors is filth, and its supporters are always decades (or years) away from destruction by populists from the left or right. Tucker Carlson has praised Elizabeth Warren's earlier work on the "two income trap" (well before she became a joke). Bernie's 2016 campaign was overwhelmingly focused on working class Americans. I won't defend AOC.

Lmao, imagine thinking Tucker is anything but elite.

Should American politics be two classes of elites jockeying for power? Elitism in all flavors is filth

This is a really good point. To me, it's inconceivable to think that a country as big, developed, and diverse as the US only has 2 political parties to represent the whole electorate, both of which are super entrenched. It limits debate significantly and just becomes a match of soundbites, instead of the nuanced views that individuals and groups have.

Should I Report Him
+368IBby lsjsk
Oncycle is a fucking joke
+195PEby Analyst 2 in IB - Cov
Dating smart girls
+143OFFby Analyst 2 in Consulting
How often do you get "matches" on apps?
+137OFFby Associate 1 in AM - Other
Unsure what to do about GF - Need Advice.
+134OFFby RE-Analyst
I am done with life
+115OFFby Prospect in IB-M&A
Am I Crazy To Leave a 500K Job for Consulting?
+108COby Associate 3 in S&T - Other
Gabby Petito
+102OFFby Associate 2 in IB-M&A
Have you ever sued your employer?
+95PEby Principal in PE - Other
The Qualifications of an EB
+86IBby Summer Associate in IB-M&A
END_OF_DOCUMENT_TOKEN_TO_BE_REPLACED