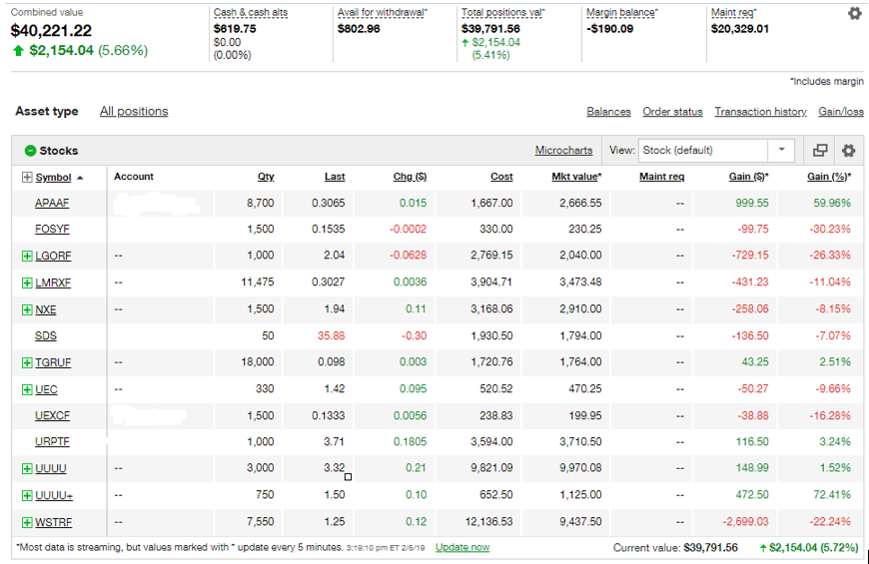 I'm putting an entire 401k of nearly $40k into microcap uranium miners. Some of these names have market caps of under $10 million USD. Many of these names are down 99% from the all time highs. The last bull market saw some stock prices go up 1000x.

The uranium market is in the first supply shortage in decades. In the last bull market, uranium spot prices went up 14x while the market was balanced with a slight excess of supply. After Fukushima in 2011, Japan took all of its reactors offline, drastically reducing global uranium demand. Compounding the problem, these utilities began selling their inventories in the spot market greatly increasing supply. Furthermore, enrichers started underfeeding their units producing an estimated 20 million pounds a year of extra supply. (Underfeeding could be described as similar to squeezing oranges harder and longer to produce more juice.)

All of the factors mentioned above, that created an oversupply of uranium, are now changing. The Japanese government has plans to bring over 75% of their reactors back online. High priced term contracts for enrichers are rolling off, eliminating the excess supply from underfeeding. Miners are refusing to continue production at these low prices. Cameco has shut down McArthur River, the world's highest grade uranium mine. In 2012, this mine produced 13% of the world's mined uranium production. The company is now fulfilling is term contracts by purchasing spot uranium at prices lower than its production costs. This has an incredible impact on global balances as not only supply is decreased by 13% but also demand is increased by 13%. Furthermore, Kazatomprom, the Kazakhstan state owned miner that produces over 40% of global supply, has promised to reduce production by 20% over the coming years. In comparison, if Saudi Arabia (controlling only 12% of oil supply) proposed similar cuts, I think oil prices would easily skyrocket to over $200/ bbl.

Section 232 for uranium will go to Trump's desk in April to set quotas on US uranium production. The proposal states that US nuclear power utilities must use US produced uranium for 25% of their fuel sources. Furthermore, it classifies the potential loss of US uranium production as a national security risk. The US currently only supplies about 2-5% of the uranium used by our utilities. The remaining 98% is imported from foreign countries. Over 55% of these imports come from unfriendly former USSR countries. If these foreign countries ever cut us off, we could see the collapse of the US power grid as all of our nuclear power plants grind to a halt. Approval of section 232 will increase demand for US uranium by 10x and easily drive prices to the marginal cost of production of $65/ lb.

***I am not trying to pump and dump any of these names. I plan on holding these positions for months if not a few years. There are no large cap miners with specific US based uranium production. So you have to look at MicroCaps.

The correct answer is (A).

According to the CFA Institute Code of Ethics and Standards of Professional conduct, Old_Man_Mr._Partridge is in violation of standard II(B) Market Manipulation. By disseminating carefully selected information on various internet forums and failing to distinguish between fact and opinion, he is intentionally trying to mislead market participants into purchasing microcap shares of Uranium miners ("pump and dump").

He could also be in violation of standard VII(A) Conduct as Participants in CFA Institute Programs. In fact, driving a lime green lamborghini reflects poorly on the integrity of the profession. In order to avoid future violations of the code and standards, his friends, coworkers, and significant other(s) should dissociate from him and his bullish activities.

Haha. This response is pure gold.

But good point on one thing...
*The above post is not investment advice and should be only seen as entertainment for watching that 401k account end in complete ruin.

When old Mr. Partridge kept saying, “Well, you know this is a bull market!” he really meant to say that the big money wasn’t in the individual fluctuations but in the main movements, not in reading the tape but in sizing up the entire market and its trend