Stepping Away from Lending Club

Mod note: Blast from the Past - "Best of Eddie." This was originally posted in April 2013.

It's been awhile since I've done an update on the Lending Club WSO CDO and my Lending Club account in general, so I thought I'd knock one out this week. The fact is, I'm no longer investing with Lending Club and I'll explain why. Everyone's investment objectives and risk tolerances are different, so this change in strategy is just a reflection of my own personal preferences and is in no way meant to take away from the many great things Lending Club has accomplished. It's still the best P2P lending platform (in my opinion); it's just not for me anymore.

First things first. As of April 29, 2013 the WSO CDO is down to its last 4 notes (after beginning with 10). Three were sold and three have been fully paid (as shown after the jump). The weighted average rate is 11.93%, but that hasn't changed since day one. The Net Annualized Return on my broader Lending Club account is 14.89%. To date, I've had no defaults or charge-offs due to my aggressive aftermarket sales strategy.

At the present I'm just letting my account wind itself down. I haven't invested in any new notes in roughly five months. The notes I have remaining pay themselves off month by month and if a payment is missed I sell the note on the aftermarket immediately. I expect my account to take probably another 24 months to move completely to cash. 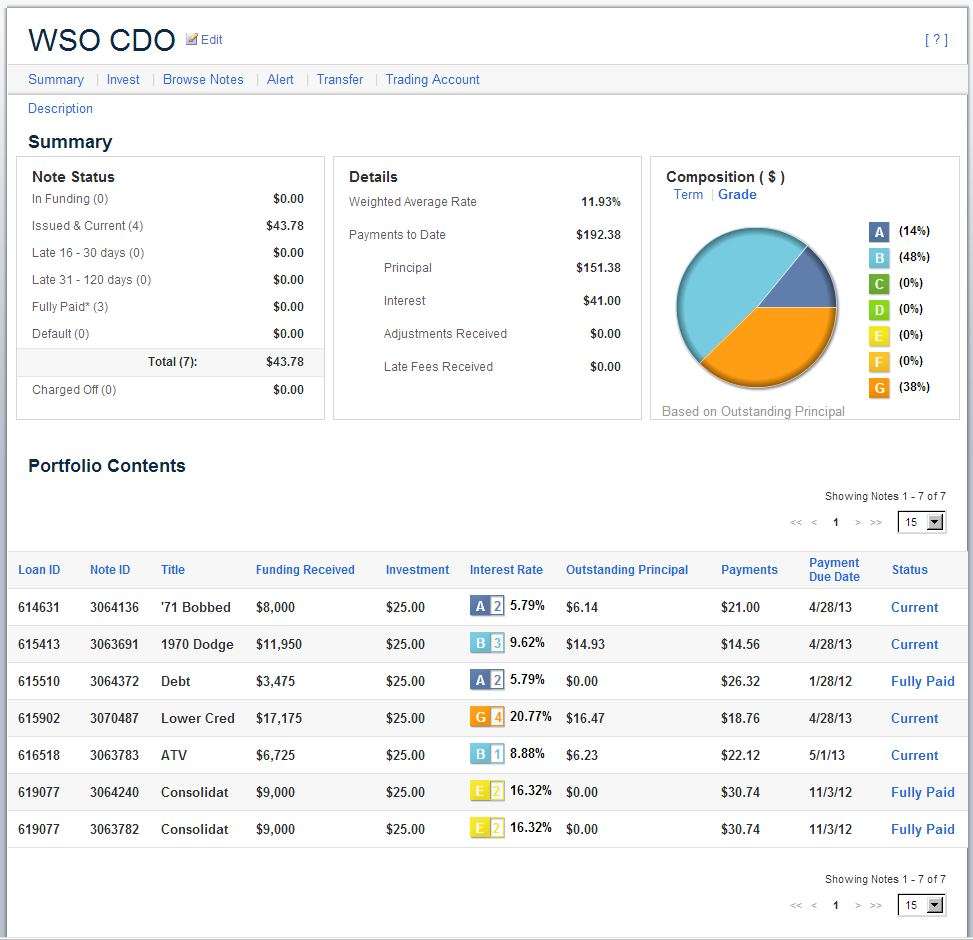 So why am I leaving Lending Club?

In a word, they've evolved. I got started with them in late 2010 when very few people knew about P2P lending and the company was still trying to gain traction. In the early days, Lending Club was extremely investor-centric. Underwriting was wide open, and investors had access to all kinds of information on borrowers. If an investor was considering a particular loan and he had a specific question of the borrower, he could just ask him and then invest if the answer was satisfactory.

Eventually, Lending Club moved away from this model. Investors were no longer allowed to interact freely with borrowers, and investors were limited to about a half dozen pre-approved canned questions they could ask a borrower. At the same time, P2P lending began to take off, so there were a lot more investors now. What that meant was that loans became fully subscribed more quickly and borrowers no longer felt any pressure to answer questions or make investors comfortable with them. Good for borrowers; not so good for lenders.

I suspect Lending Club lost a lot of investors when they made that change. I wasn't one of them. Perhaps it's my suspicious nature, but I always figured borrowers were lying anyway, so I never put much stock in the questions asked.

As an investor, it's important to keep an eye on your portfolio or you're going to deal with defaults. Lending Club has always been up front about this and even bakes a default rate into their expected rates of return. But for vigilant investors (like myself) defaults could be limited or even eliminated. That's because Lending Club always kept detailed notes on what was going on with individual loans.

For example, if someone missed a payment it was reflected on their note that day so the investor could see that the payment was missed. Also catalogued was all the attempts to reach the borrower and detailed notes on any conversations with the borrower. This kept the investor in the loop and helped make the decision to hold the note or sell it easier to make. In the early days, you could even call into Lending Club and talk to a customer service rep about the note and they'd tell you even more about the collection efforts.

Eventually, though, this changed too. Just like the ability to ask borrowers free form questions, the collection notes on the account became canned. Where there would have been detail before, now it just said Missed Payment, or Attempted to Contact Borrower, or Borrower Promised to Pay. But no real detail and now when I'd call in the customer service guys would tell me that they couldn't give any more information.

Now it's at the point where I have to use Excel to screen for missed payments, because Lending Club is no longer annotating a missed payment until the loan enters the 10-day Grace Period. Sometimes not even then. I sold two notes this month which are currently In Grace Period and neither of them even reflects a missed payment yet. They're both more than 10 days past due.

Where it becomes a real problem is when you go to sell a loan that appears set to default. Obviously you want top dollar when you sell a note in the aftermarket, and the only way you're going to get top dollar is if the note is current and has never been late. If a note slips into the Grace Period it no longer qualifies as Never Been Late even if the payment comes in a day later.

The only reason I've been able to invest for three years and achieve a near-15% annual return with no defaults or charge-offs is my aggressive selling strategy when someone misses a payment. I literally want that note sold the second a payment is missed, because I know that's when I'm going to get the most money for it. If Lending Club is no longer notifying me that a payment has been missed as soon as it is missed, they're putting me at a massive disadvantage in the aftermarket.

So that's why I'm slowly winding down my account. On average, I'm selling about six notes a month in the aftermarket and probably two more on average are paying themselves off.

I don't want to sound negative about Lending Club, because I think they're great people providing a vital service and leveraging technology to create a win-win environment for everyone. But I'm not as interested in a win-win as I am in a win for me, and now the table is tilted in favor of borrowers instead of lenders. It's time for me to find the next low hanging fruit.

Fire away with your questions.

Mod note: Blast from the Past - "Best of Eddie." This was originally posted in April 2013.

Last wave of Covid
+186OFFby losanagelesbaby
I want to move to a cheaper city but my girlfriend wants to stay in NYC
+167OFFby ThrowawayBBBANKER
Help Me Better Understand the Benefits of Web 3.0/De-Fi
+163OFFby Lester Freamon
Are there people actually richer than Elon Musk and Jeff Bezos
+77OFFby craig.owen
Life after high finance
+71OFFby StreetofBulls
Who's the most amazing athlete you've ever seen in person?
+55OFFby Whatever1984
The Essentials of a Badass Office
+36OFFby Isaiah_53_5 💎🙌💎🙌💎
Where are my metalheads?
+33OFFby Arroz con Pollo
Should I do the CFA?
+29OFFby The Prospect
Faking Mom's Illness to go to Interview
+21OFFby Fast and Fiduciary
END_OF_DOCUMENT_TOKEN_TO_BE_REPLACED