The Eurozone: on the road to recovery with a lingering risk

Back in September the idea that the Eurozone's economy could potentially undergo a recovery (see post) was met with some skepticism. And yet here we are. The EuroStoxx50 index is up 14% for the year while the Dow is up 2.5%. We now see plenty of indicators showing strengthening economy in the euro area.

To begin with, the area's credit conditions continue to improve as loan growth is about to turn positive for the first time since the middle of 2012. 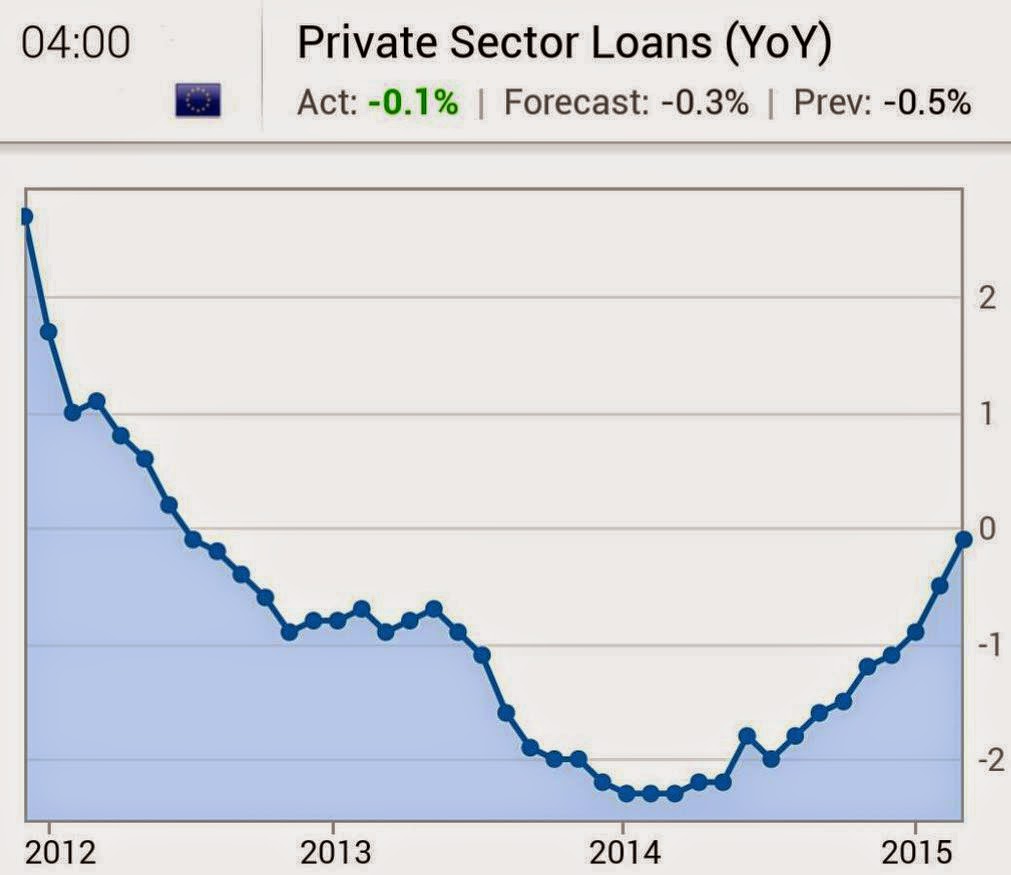 Corporate and household loan expansion, while still terrible relative to the US, is on the right path. This is particularly true after the conclusion of the ECB's stress tests (which were a major source of uncertainty in 2013). 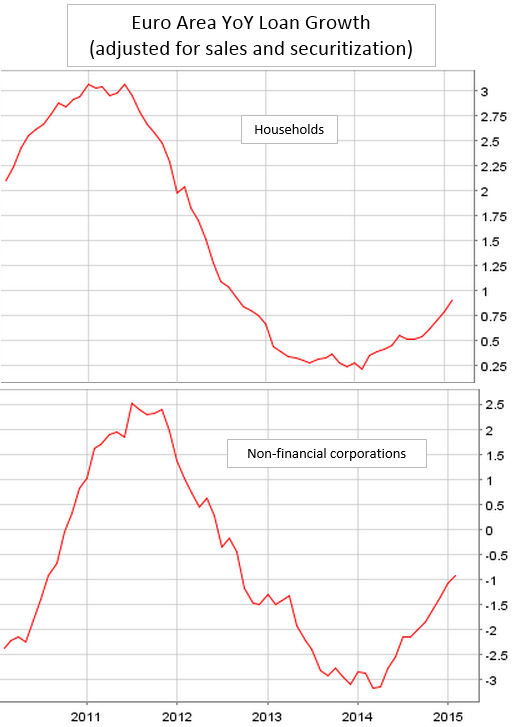 The area's bank deleveraging is ending (see post) and the strongest evidence of that can be seen in the acceleration of the broad money supply growth. The M3 expansion trend has been fairly consistently beating economists' forecasts. 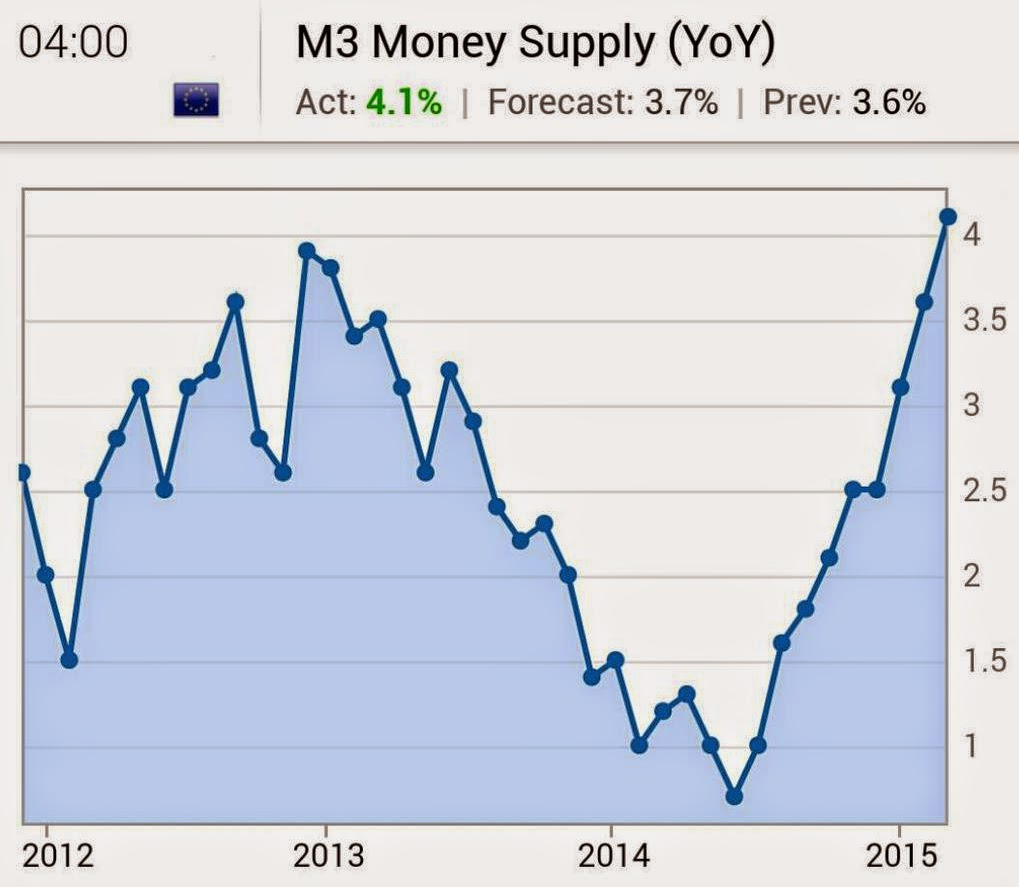 Both business and consumer sentiment surveys, which soured significantly after the Russia sanctions went into effect, showed marked improvements recently. Part of the reason is the decline in fuel prices. 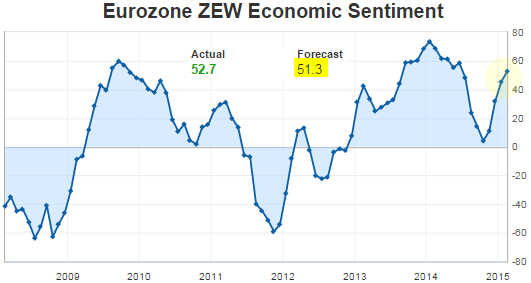 Moreover, the labor markets are exhibiting signs of stabilization. Just to be clear, the declining unemployment is highly uneven across the various states and nobody claims the job situation in the Eurozone is in good shape. 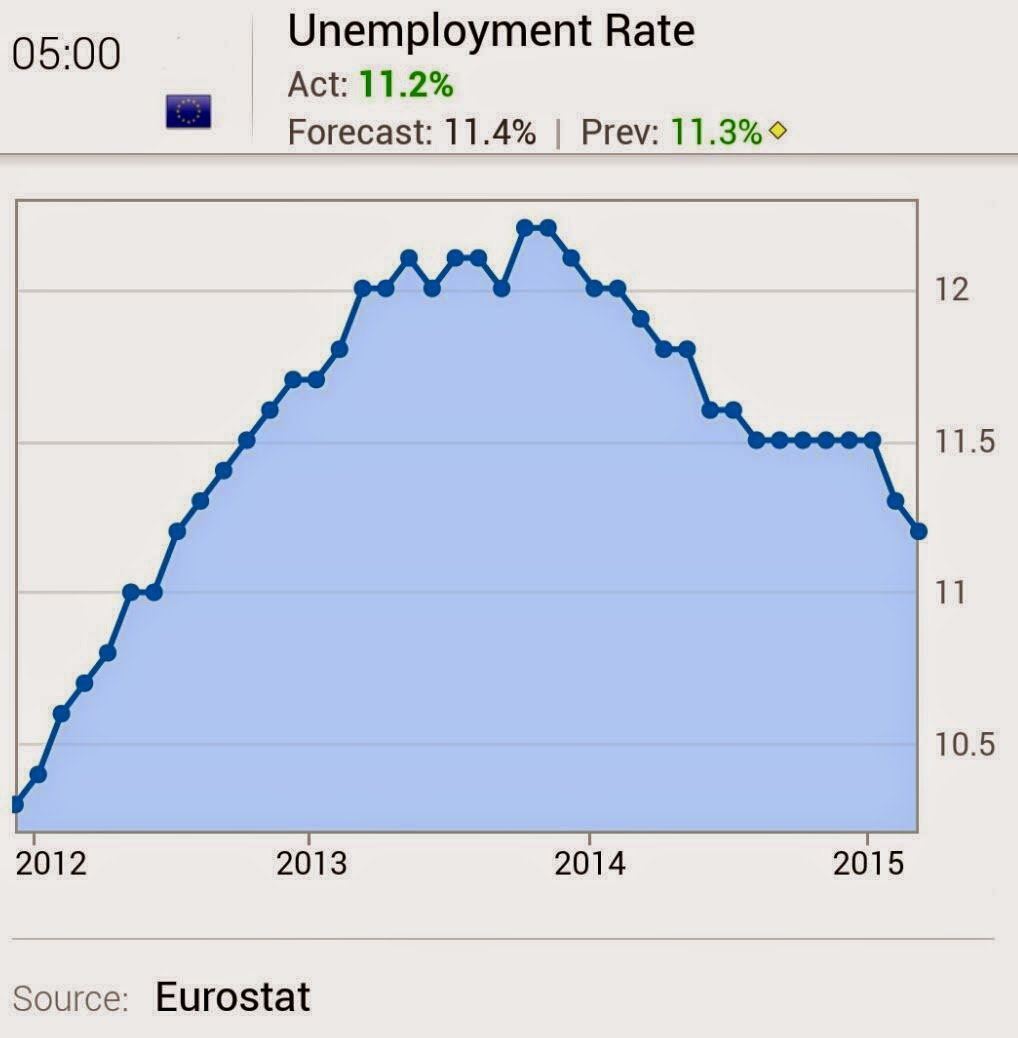 By any measure, the job markets in some of the periphery nations are dreadful. But on a relative basis, hiring across the euro area has been improving.
RBS: - Baby steps. The Spanish labour market has enjoyed its best year since 2007 - a start on a 23.4% unemployment rate. 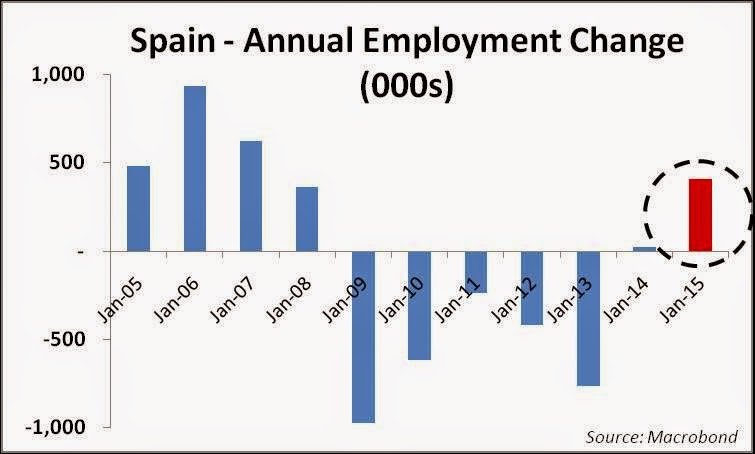 A number of these surprises to the upside are reflected in the Citi Economic Surprise Index, which shows the Eurozone diverging from the US. 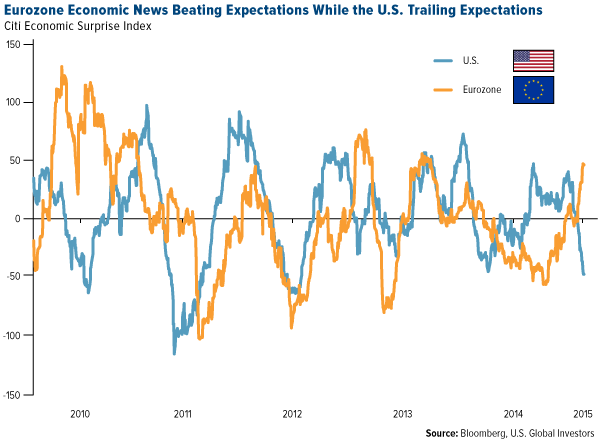 Going forward, the sharp deterioration of the euro and the ECB's expected massive bond buying program should halt deflationary pressures (although just as the case in Japan, inflation is likely to remain below the ECB's target for a while). Weaker euro may also help the area's exporters. 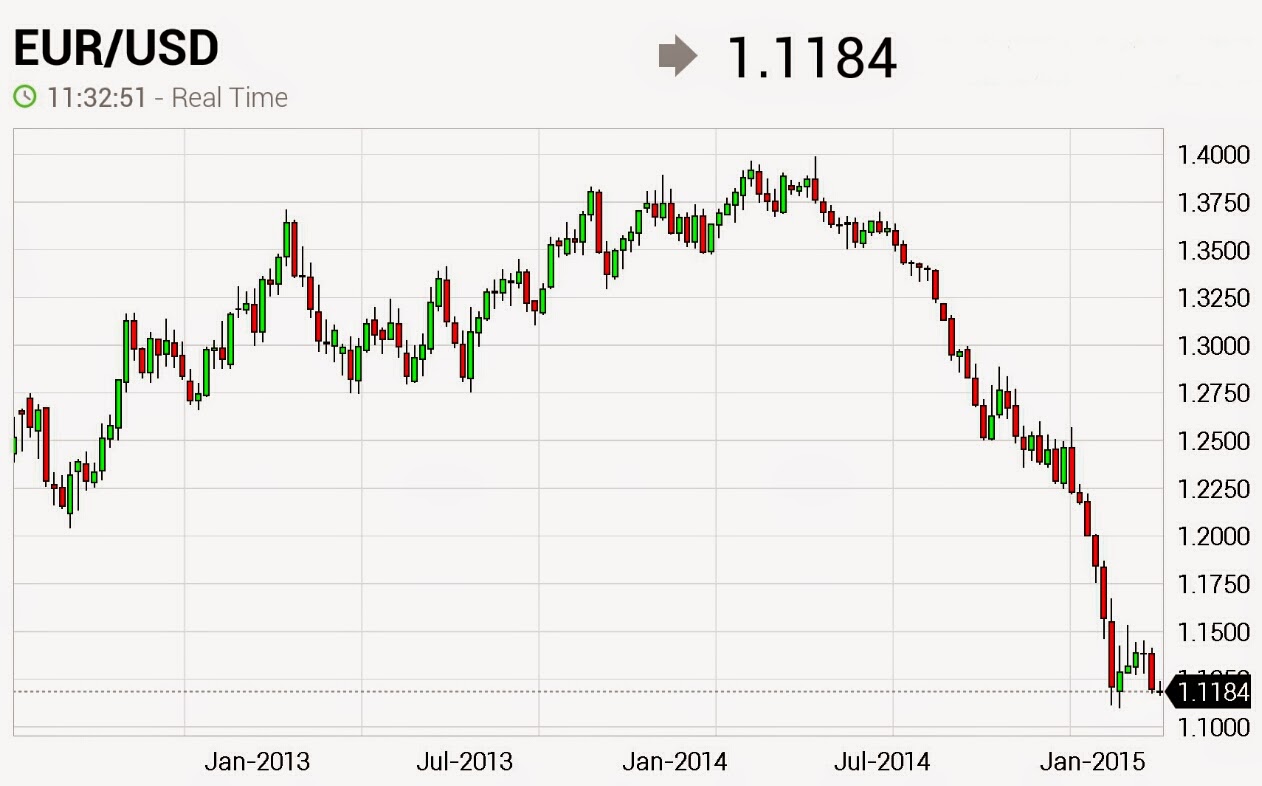 But the euro area's economy is not out of the woods yet. The greatest and the most immediate risk to the recovery remains the developments in Greece. While the Eurogroup has kicked the can down the road, the situation could deteriorate quickly even before the bridge financing matures. Depositors are continuing to withdraw money out of Greek banks. 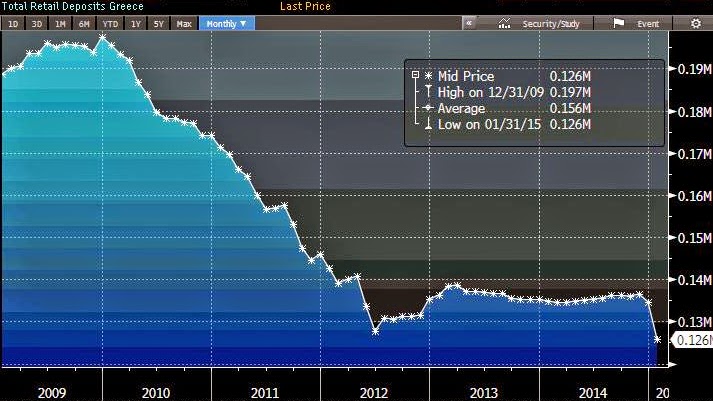 Nobody wants to get caught with a Cyprus type situation where people's property was confiscated by the state via deposit haircuts. An even worse scenario would be having deposits forcibly converted into drachmas that will find no bid in the FX market. The Greek government is already taunting the Eurogroup with creative drachma notes designs (Greece will need take lessons from Zimbabwe and add a few zeros to some of these notes). 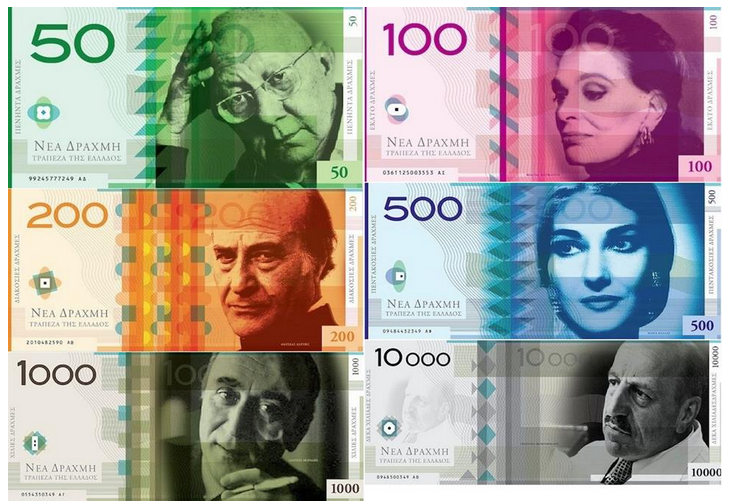 As these deposits leave, Greek banks lose their limited sources of private funding and increasingly rely on the Bank of Greece for the emergency liquidity assistance (ELA) loans. In fact investors have little confidence that the banks are sufficiently capitalized after the last bailout to withstand this transition. That's why today alone, the banking sector took a 10% hit. 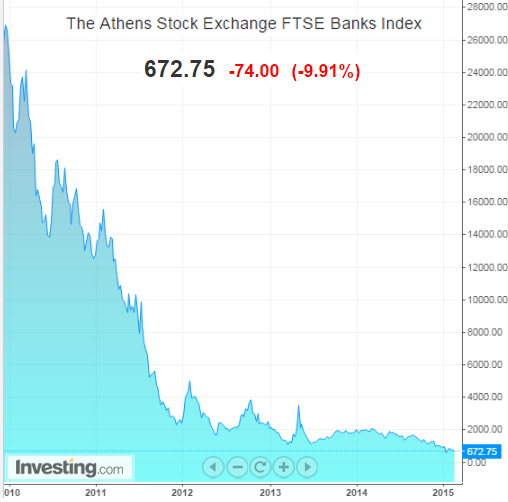 There is no question that the EMU will easily withstand such an event - it's not a great sum of money in the larger scheme of things. But the loss of confidence and the political nightmare associated with recapitalizing the ECB as well as the fears of contagion to other periphery nations may send the euro area back into recession. Will depositors in Italy, Portugal, and Spain begin to move their deposits out as well in order to avoid being "drachmatized"? Economists often forger, it's less about the specific euro amounts and more about the psychology of fear.

If however the Eurogroup manages to somehow stabilize the Greek situation, a steady economic recovery could be in store for the Eurozone. The next few months will be crucial.

Cant do it anymore
+434IBby starfishM
What's happening during live deals?
+227IBby irongiant
Investment Banking is Paradise
+211IBby Partner in PE - LBOs
Public banging
+168OFFby Intern in PE - LBOs
Should I Report Him
+144IBby lsjsk
MD’s Daughter/Son has student loans?
+107REby Analyst 1 in RE - Comm
Can I get into HBS or GSB
+95BSCHby HBSorGSB
Who pays for what? (Splitting expenses with gf/wife)
+93OFFby VP in IB - CB
The Four Visions of America: Which are you?
+86OFFby Drumpfy
Cellar Boxing - the Market Maker's pièce de résistance and "Legal" tool for Stock Manipulation
+80OFFby PrivateTechquity 🚀GME🚀
END_OF_DOCUMENT_TOKEN_TO_BE_REPLACED