Thinking outside the toy box

Elon Musk quote of the day

Silicon Valley VC firm Sequoia Capital is reportedly raising a $5 billion global growth fund-the largest private VC fund to date in the U.S. And to our good fortune, it's strictly investing in New York-based business newsletters. What are the odds?

Since its inception in 1972, Sequoia's been synonymous with success, taking early stakes in Apple, Google, Instagram, and WhatsApp (among many others).

But this most recent money pool eclipses Sequoia's 2015 fund by nearly $3 billion. And there's speculation it's being raised with one person in mind…

All it took was a $93 billion Vision Fund and a man with a 300-year business plan to send all the top dogs in the VC world scrambling. Masayoshi and SoftBank made headlines all year, placing an $8 billion investment in ARM Holdings, $4.4 billion in WeWork, and potentially $10 billion in Uber.

And even if other firms wanted to compete to lead rounds, it's hard to go dollar-for-dollar with a fund that cuts $500 million checks like butter.

Ask yourself this, "How in the world is a $68 billion company still not public?" Uber's one of many private tech unicorns (like Airbnb, WeWork, and Dropbox) delaying the inevitable public leap.

All in all there were...

Not to mention, the average lifecycle from seed funding to IPO has jumped from 5 to 11 years since 2000.

Which means VCs, now more than ever, are fighting to plug unicorns with late-stage investments for big returns. For now, SoftBank may have tilted the scale in its favor, but it also notoriously seeks large stakes and/or board seats in the companies it invests in.

Sequoia's hoping a fatter purse and a friendlier disposition will go a long way.

Facebook's Singing a Duet With Universal

In a landmark deal, Facebook (-0.25%) and Universal Music Group (UMG) announced a partnership allowing users across the social media company's platforms to dip into UMG's vast catalog of music.

It's refreshing news, because we were getting pretty tired of everyone's Instagram videos set to the same Garage Band "indie-pop groove" loop.

For UMG, whose labels include Island, Def Jam, and Capitol Records, a formal relationship with Facebook gives its artists the opportunity to access 2 billion users (oh, and Instagram's additional 800 million) who'd love nothing more than to share the most recent Daddy Yankee toe-tapper with their friends.

But that was a tall task given existing restrictions uploading licensed music. And now that the gates have been pushed open, Facebook and UMG are starry-eyed thinking about all the "music-based experiences" social media offers.

And Facebook needs to find its tune if it wants to dance with China. Last month, tech firm ByteDance acquired lip-syncing app sensation Musical.ly for $1 billion. And Tencent? It's got a chunk of Spotify.

Why not, indeed. Uber's rival in China is showing the fundraising grind don't stop, raising yet another round with SoftBank and an Abu Dhabi sovereign wealth fund, Mubadala. This brings the five-year-old company's total fundraise to $19 billion.

If you're having déjà vu, that's because Didi just completed a $5.5 billion round in April. And worth $56 billion, some believe it's more valuable than Uber at this point (Softbank's upcoming tender offer pegs the company around $50 billion).

Alright Didi, so you've got another $4 billion to play with. What now?

Hit all the buzzwords

And now that it's got a firm hold on the domestic market (after buying out Uber's Chinese business in 2016), it's time to take the world by storm. First stop? Mexico.

So don't be surprised if you're Didi-ing to the bar during Spring Break.

Toys "R" Us Thinks Outside the Toy Box

How do you avoid the Toy Story 3 fate of being incinerated, or worse, forgotten? If you're Toys "R" Us, you dust yourself off, get the snake out of your boot, and try everything.

The beleaguered and bankrupt big box toy retailer is pulling out all the stops to revamp its website and loyalty program and lure customers back into its brick-and-mortar stores. This year, it launched 42 experiential "play labs," where kids (and their kids-at-heart parents) can test the broiler settings on the new Easy-Bakes right in the store.

Sounds like a great way to not buy anything...

And that's exactly what's concerning creditors: the sticker shock of scaling customer experience. Toys "R" Us plans to use $400 million (of its $3.1 billion in bankruptcy loans) to tinker with a new model for its 900 stores. That's a lot of cheddar in the Mouse Trap.

The next Hail Mary: stores nationwide will open Friday at 6 am and stay open for 63 hours straight through Christmas Eve.

Maybe shopping with your bratty nephew at 4 am is exactly what he deserves.

Analysts made their list and checked it twice, and according to their data, you're not asking Santa for fitness trackers or smartwatches as much as you used to.

Wearable users will continue to grow an expected 11.9% next year, but that means less than 20% of the population is strapping on a tracker...and growth should continue to slow down for the next three years. Luckily for us, we won't have to hear that Jan hit her step-count four days in a row. 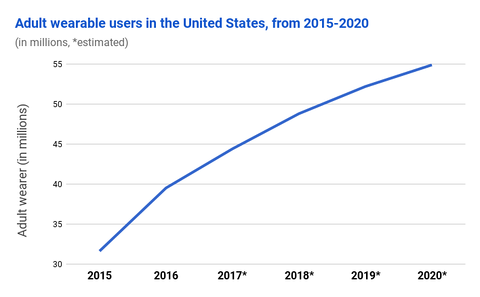 Take the given words, and by moving a single letter from one word to the other, make a pair of synonyms, or near synonyms. For example, given: Boast - Hip, move the 's' from 'Boast' to 'Hip' creating two synonyms: Boat - Ship.

In 2016, Warner Music paid $14 million to settle a copyright lawsuit over which song (the English language's most popular)?

500%-Long Island Iced Tea's stock surge after it changed its name to "Long Blockchain." It'll still make iced tea, but now it'll wash that cold beverage down with investments in blockchain-related companies. You really can't make this stuff up.