Think of Twitter as a Christian bakery and Trump as a gay wedding cake.

I'm just joking, so take it easy with the MS. I'm kind of taking a stab at both sides.

And the bakery was required by courts to make the cake...

You just owned your own side and disproved yourself. Congratulations.

Wow I didn't know that. That's kind of unconstitutional right?

Good point but Twitter is not the only Social Media company.

Then the gay couple can go and make other bakeries great again, Jesus

TLDR: the establishment can suck it. Political parties are now irrelevant.

But then their website is removed because AWS doesn't agree with them.

In 2015ish when the right was complaining about big tech enforcing anti-right censorship, the left said "go make your own social media website."

In 2019 when people started realizing there was a monopoly/oligopoly on social media, the left told us to deal with it and it's just how the world work.

In 2020, Parlor kicked off and gained popularity.

In 2021, there were purges of more mainstream right wing figures (no longer was it just Milo and Gavin kicked off, it became the sitting US president). Of course, there was always Parlor to join...right?

Oh wait, not anymore. Now, AWS can kick off Parlor for BS reasons. So, what does the right wing/gay couple do in this situation? Ideally, we'd live in a world where the rules were enforced equally. However, given that the left and political establishment of both sides controls the narrative it becomes justified to discriminate against their "out groups" i.e. anti-establiment political figures and semi fringe rightwing groups.

also, don't come back with "bad orange man advocated violence" because the entire left wing encouraged blm/antifa mobs all summer. This is a plain case of unequal enforcement of rules with a political motivation. Throwback to when trump couldn't block people on twitter because of 1st amendment too. There is a systematic issue with legal enforcement in the US. And I'm only singling out right wing groups because this is the current discussion. There are anti establishment/out groups groups on the left facing the same issues in unfair enforcement.

Imo, the world under Trump turned from R vs D to Establishment vs People very quickly. And while many don't see it that way, people need to adjust and stop trusting the media, politicians, billionaires, and celebrities and start trusting their own intuition, analysis, and experiences.

Think of Twitter as a Christian bakery and Trump as a gay wedding cake.

I'm just joking, so take it easy with the MS. I'm kind of taking a stab at both sides.

Your originality is as apparent as your intelligence. 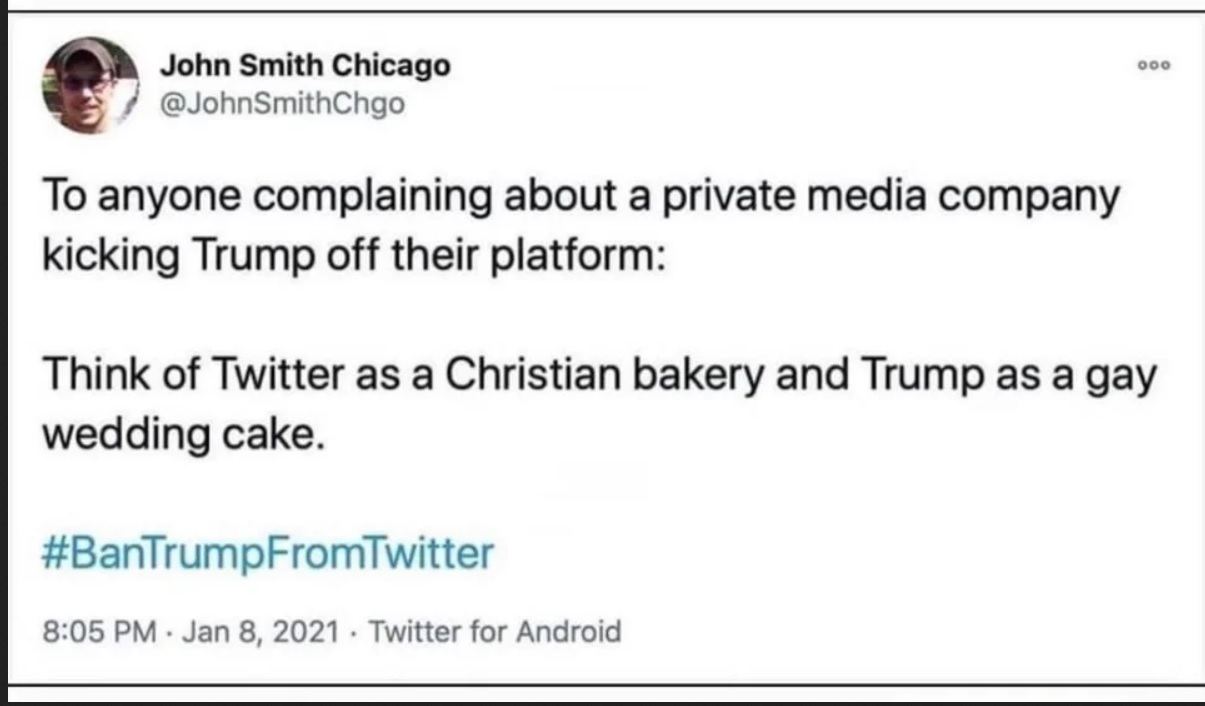 You mad bro? I copied this directly from Twitter not reddit. Btw are you ok with the way your daddy condemns your uncle?

imagine spending your Saturday night arguing with anonymous people about politics on WSO. God you're a loser

Not every prospect is me. Now go back to reddit.

I don't think you can really compare the two. One is a bakery, if they refuse you can just go to another bakery. Can't really go to another twitter. One makes cakes, the other is used by a lot of influential people and has control over the flow of information. Sure, they can refuse to do business with people, as private business they have that right. But to what extent? How should we deal with social media companies that control a channel of communication and to one which alternatives don't really exist? It's a slippery slope when you start banning people. While twitter may not be banning people left and right, it sets a precedent and that's the real danger here.

Not only did an alternative not really exist, but when one WAS attempted, we saw Google, Apple, and AWS pull it from app stores and now web hosting services. It was never about those companies taking a stance against violence. The BLM riots caused more deaths and WAY more destruction, including to government buildings, than the Capitol Hill one, yet those are completely supported. If we're going under the argument that it's a private company and should be able to do whatever they want, then they shouldn't get Section 230 protections.