A bunch of you have been asking me how the Lending Club thing is going and after I mentioned it in Bonus Bananas a couple weeks ago I got a few more PMs for an update on the WSO CDO so here goes.

I'm doing something a little different this time around because I want to show you guys how the note aftermarket works. In my last update I mentioned that I'd been selling a few notes that looked like they were about to go sideways, and since then I've modified my investment criteria to include more risk - so the note aftermarket is an even bigger part of my strategy now. So far, it's working like a champ because my Net Annualized Return as of today is 13.78% overall, and 15.02% on my primary portfolio.

So what am I doing different? Well, based on some pretty basic analysis, I determined that D-rated paper had the highest return with the lowest default rate out of every grade offered. So I've gone heavier into D-rated paper over the past year. I still buy other grades (the only grades I will not buy are A and B because the return just isn't worth the risk IMO), but I concentrate on the D paper. In fact, I might as well just show you guys my secret sauce:

Here is my criteria for investing in Lending Club loans:

These are admittedly pretty strict criteria. This means that on a good day I might be looking at a total of 20 loans out of the 2,000 or so Lending Club has on offer on any given day. But it works for me, and I think the proof is in the pudding.

Now, let's talk briefly about the WSO CDO. It's almost two years old now, and there's been some attrition. As I mentioned in previous updates, of the 10 loans we started with only seven remain. The other three got the boot for sketchy behavior. All three of those notes were sold for a profit on the aftermarket. So here is where the remaining seven stand today: 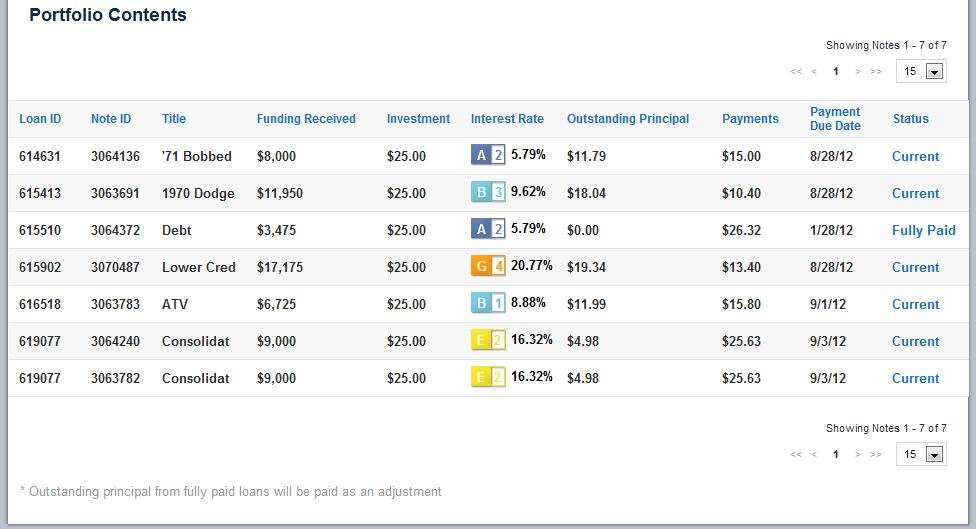 As you can see, one of the loans has already been paid in full. Thankfully, it was A-rated paper and wasn't paying us much in interest, so I'm glad to see it go.

There is a growing community of P2P investors who keep tabs on each other, and they're (we're?) a pretty interesting bunch. One of the more prolific is Nickel Steamroller. He's a great guy who has created a bunch of nifty tools for analyzing P2P lending, but he was having some trouble with defaults because he deployed a strategy of buying 60-month notes. When he and I compared notes (so to speak) he was surprised to learn that I pretty much never buy 60-month notes because I don't care to invest in people who need that much time to re-pay me. Then we got on the subject of selling bad notes in the aftermarket.

It was my turn to be surprised. He'd actually dabbled in the aftermarket himself, but on the buy side. He got absolutely hammered. His default rate was through the roof on the notes he bought. Maybe he was buying junk because of the attractive yield, I don't know. But when I shared my strategy of selling notes that had only recently showed signs of trouble, it was like a light went off for him.

I won't go into the strategy I shared with him here because this is already running long, but you can read it on his blog post here: http://www.nickelsteamroller.com/blog/2012/06/balancing-your-portfolio-… down in the comments. I think a well-articulated disposal strategy is key to a high-return P2P portfolio, and thankfully there are plenty of hedge funds gobbling up notes in the aftermarket to provide the required liquidity.

The following is a snapshot of my FolioFN aftermarket account for this month so far. It'll give you an idea of what it looks like, and you can see the loans that I've sold so far this month and what their status is: 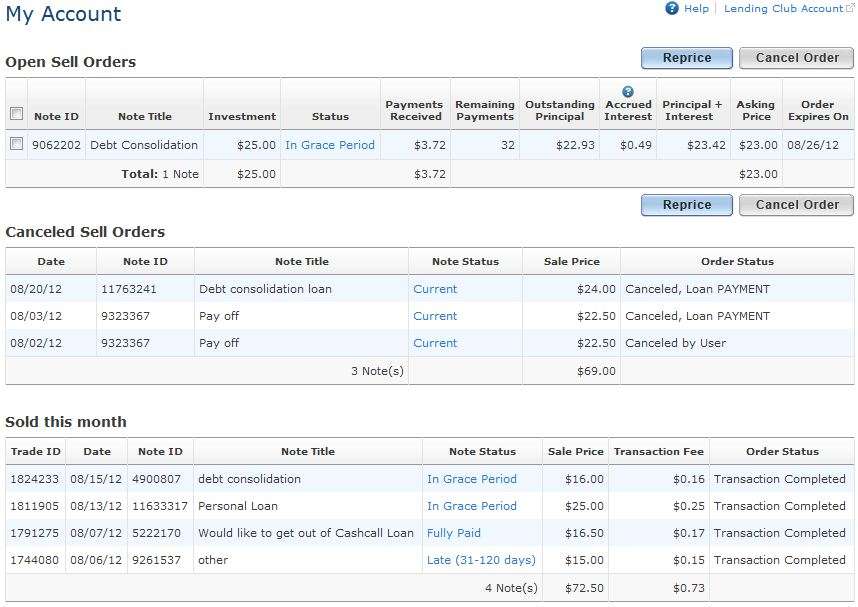 Thanks to this strategy, I've still never had a default. You can see that I have one note for sale currently, and that its status is In Grace Period. There is a 10-day grace period for a borrower to bring his loan current before he pays a late fee. Fortunately, loans which are In Grace Period are still considered Current for the purposes of the aftermarket, so this loan will display to buyers searching with the strictest criteria (many people won't buy a loan in arrears for obvious reasons).

If you skip down to the loans I've sold this month, you'll see that two have slipped into In Grace Period, and that one is already 31-120 Days Late (pretty much no hope for the guy who bought that one). The last one is Fully Paid. Sometimes a borrower will miss a payment because he's arranging to pay the loan in full. I've had this happen three or four times now. But I had no way of knowing and only saw the missed payment. So I sold this note for $16.50, which was a profit for me. Then the note paid off, and I think the buyer got even less in the payoff. So that really kinda sucks for him.

The Cancelled Sell Orders section is just what it sounds like: sales cancelled by either myself or the buyer. Evidently a buyer has the right to rescind a sale in the pending period if a payment is made (which obviously affects the yield on the note). So that's what happened there.

I think that about covers everything. If I've missed anything or if you have any questions, hit me with them in the comments.

Are a lot of people on this website on the spectrum?
+111OFFby FlyingRunningJumping
Favorite book
+80OFFby its-accrual-world
How to live longer
+57OFFby earthwalker7
Being polished
+52OFFby tossed aligator
To those in their mid to late 20s approaching 30, why are you living alone?
+44OFFby Pizz
WSO Book Club MMTG Part 2
+44OFFby kellycriterion
Where are my metalheads?
+34OFFby Arroz con Pollo
WSO Quality-We Need Age Limits
+30OFFby Champagne Sipping
Would you date a girl who makes more than you?
+27OFFby EgoManiac11622
Faking Mom's Illness to go to Interview
+21OFFby Fast and Fiduciary
END_OF_DOCUMENT_TOKEN_TO_BE_REPLACED