Quick-stomp on your phone, then tomahawk your computer into the nearest wall.

On second thought, you might want to read this first: researchers from Google's Project Zero, UPenn, and the University of Maryland (among others), discovered hackable security vulnerabilities in computing chips that exist in nearly every mobile phone, computer, and cloud-connected server around the globe.

Oh God, we wish we were kidding…

But we're not. The bugs, coined "Meltdown" and "Spectre" (trap house mixtape dropping soon), allow malicious software to circumvent a memory chip's security and steal encrypted information while the chip is in "speculative execution"-aka brainstorming what next steps it should take to execute a task.

The first of the two bugs, Meltdown, could affect every Intel (-1.83%) processor made since 1995. Sure, Google and Microsoft have already announced software updates that can fix the problem, but they'll slow down devices.

As for the second bug, Spectre, virtually every modern chip (made by Intel, AMD, and ARM) could be vulnerable. And while it's much more difficult to exploit, there's no cure-all...unless you go full-Steve Wozniak on your computer and replace the processor.

But we're guessing you won't

Instead, here are some practical steps to keep you from pulling every fire alarm in your building.

Step 1) On January 23rd, update to the latest version of Chrome or Firefox 57 if you use these browsers.

Step 3) Check to see if your computer's manufacturer has released any information or updates.

Sorry, Apple lovers-we're still waiting on any new developments, but make sure to keep your eyes peeled.

Every January, we plan to better ourselves by setting New Year's resolutions. Of course, when Mark Zuckerberg posts his goal for self-improvement...it's a slightly bigger deal than our Mission Slimpossible diet.

Especially this year, which was one to forget for the world's largest social media site. Between U.S. election interference, questions of social media addiction, and issues of user privacy, Facebook is no longer the plucky tech upstart we all rooted for in The Social Network.

And Zuck seems to get it:

"The world feels anxious and divided, and Facebook has a lot of work to do - whether it's protecting our community from abuse and hate, defending against interference by nation states, or making sure that time spent on Facebook is time well spent."

"We currently make too many errors enforcing our policies and preventing misuse of our tools."

This sure feels more sincere (and less gimmicky) than 2017's goal of visiting all U.S. states. We just hope he follows through better than we do.

VW, Hyundai Get Their Hands on Hands-Off Driving

In a world, where cars are driverless and weather forecasts are always accurate...

No, that's not the tagline for a new sci-fi movie coming this winter. It's a not-too-distant reality, now that Volkswagen (+1.75%) and Hyundai (-2.66%) have buckled in to the self-driving car seat with Aurora Innovation, a startup founded last year by Google and Tesla expats.

And VW and Hyundai aren't the only automakers bringing more tech into the garage. Last year, Ford invested $1 billion in Argo AI. The year before that, GM bought Cruise for over $1 billion. And we can't forget about Waymo-as if we could.

The most logical starting point for autonomous vehicles? Commercial use, i.e. fancy robot cabs. VW's will hit the road by 2021 offering ride-hailing services in five cities worldwide. Hyundai also hopes to build a fleet of self-driving taxis for a similar rollout.

It's a brave new, driverless world.

Neiman Marcus, the luxury retailer with shopping bags full of debt ($5 billion) from two leveraged buyouts, is browsing the rack for a new CEO.

Karen Katz, who has served as CEO and president since 2010 (and a Neiman vet since 1985) announced plans to retire, though she'll retain her board seat. Despite successfully leading the company's sales and profits to pre-financial crisis levels, Katz and the company have struggled to capture the savvier (read: deal-searching) consumer.

Neiman reported a $26.2 million loss in Q3 2017, despite its first (in nine quarters) increase in same-store sales-a big deal for department store balance sheets. Katz' challenge during this past holiday season was to find ways of luring in more affluent shoppers willing to pay full price in the golden age of promo codes.

Now it's Katz' position available at a discount.

On the Record: The 10 Most Popular Websites in the World

It's 2018. And whether we like it or not, we spend more or less all our waking moments on the internet. But which sites get the bulk of our attention? 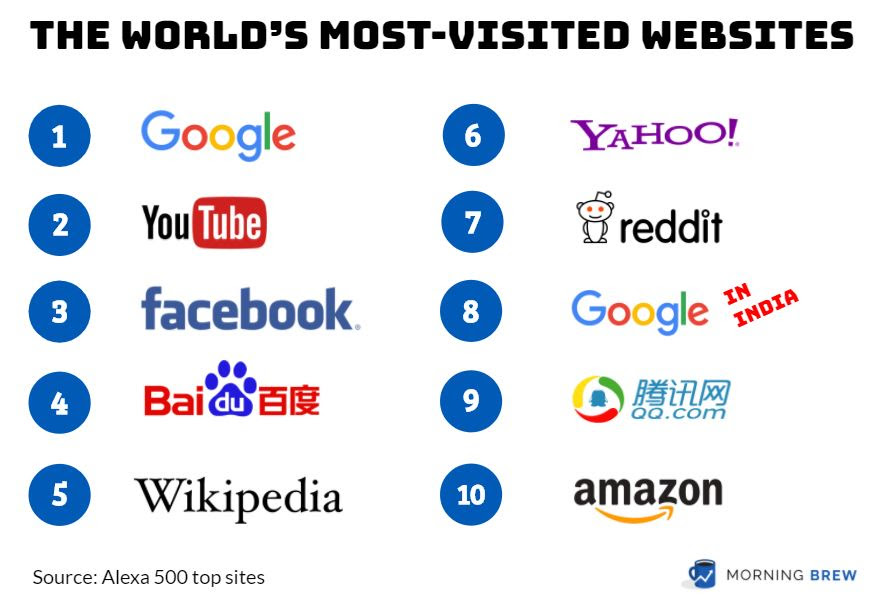 * The average Redditor spends more than 15 minutes on the site per day, by far the most in the Top 10. Wikipedia-ers? Four minutes.
* Baidu (#4), an internet powerhouse (obviously), is commonly referred to as the Google of China. Because there is no Google in China.
* QQ (#9) is Tencent's messaging platform. It's verging on 1 billion monthly active users.
* Apparently a lot of people play Yahoo Fantasy Football.

Given the word STANDARD, take away two letters and add three digits to make a logical sequence.

The "bomb cyclone" wasn't enough to shut down the NYSE yesterday. In fact, there's not much that does shut the NYSE down. BUT, in the last 128 years there was a single weather event that closed the stock exchange for two days. Can you name it?

Fun fact: The Great Blizzard of 1888 was the first time the NYSE shut down for two days, after snow drifts in some areas of the city piled up to 40 ft. Yes, 40 ft…

19-The number of cup holders in the Ascent, Subaru's new eight-seater SUV. As the WSJ put it, Subaru "plans to woo Americans" with this feature. Because you know what we like to say here in the USA: "I need 19 spots for my Big Gulp. And a good MPG would be nice or whatever."

What was your *first* deal?
+39IBby rabbit
Bill and Melinda Gates Split
+33OFFby Analyst 2 in IB-M&A
A complete list of SA 2022 Banks Still Recruiting
+31JOBby anonymousmonkey241
Dogecoin ($DOGE) - Is it making anyone else sick?
+30OFFby GoldmanFacts
Why So Many Anonymous Posts?
+26OFFby NoEquityResearch
Can We Please Ban That Ben Matan Biran Guy?
+24OFFby Monty Burns
Warren Buffett is a dinosaur who should retire
+24OFFby Lloyd BIankfein
If you could work at one firm for the rest of your life what would it be
+22IBby Charles2002
How do you nail the "wow factor" in a pitch?
+13HFby Intern in IB-M&A
Private Equity Templates Available (Get Full Access)
+12PEby WallStreetOasis.com
END_OF_DOCUMENT_TOKEN_TO_BE_REPLACED