Mandates that certain types of contracts be performed in writing.

A legal principle known as the Statute of Frauds (SOF) mandates that certain types of contracts be performed in writing. The law covers agreements involving the sale of real estate, transactions involving items valued at more than $500, and agreements lasting a year or longer. 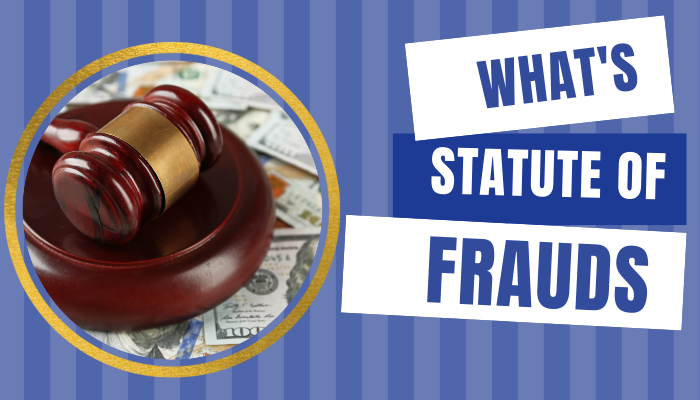 The statute of fraud was predominantly established in the United States as common law or unwritten law. However, like most states, it has now been institutionalized by statutes in some jurisdictions.

The defendant may assert it as a defense in a breach of contract proceeding when this statute is relevant. However, for a defense to be effective, they frequently must do so.

In this situation, it is the plaintiff's burden to prove that a legal contract existed.

In some Canadian provinces, the original statute established by the English Parliament in 1677, titled An Act for Prevention of Frauds and Perjuries, may still be enforced.

While the statute of frauds has been a fundamental legal principle in English and American common law for centuries, many of its key components have now been codified in most countries by particular legislation.

The two primary functions are evidentiary and cautionary. A future disagreement can be supported by proof that written contracts are required.

It is hoped that requiring parties to enter into formal contracts will encourage them to do so only after considering the matter.

Although the statute of frauds mandates that some types of contracts must be in writing and signed by the relevant parties, oral agreements are typically just as legally binding as written ones. 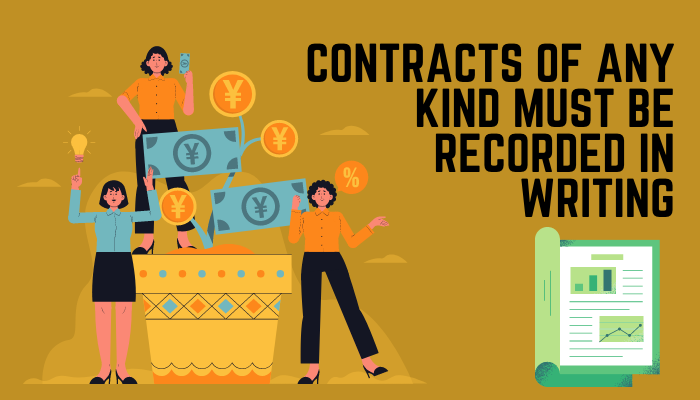 Type of contracts that need to be written down

The following contracts must be written down and legally binding under American law.

1. Sale of a Real Estate Interest

In order for a contract involving the sale of a real estate interest to be enforceable, it must be in writing. Contracts for mortgages, mining rights, easements, etc., are all examples.

As an illustration, I consent to sell you an easement to traverse my property. However, for it to be enforceable, our agreement must be in writing.

To be enforceable, debt surety or guarantee agreements must be in writing. These documents serve as evidence of a pledge to pay back a loan. This includes scenarios in which business owners guarantee their company's debts.

Take the scenario where you go up to your wealthy uncle and request a loan so you can purchase a car. I'm your friend, and if you can't repay the loan, I'll do it for you. But, unfortunately, your uncle might not be able to sue me if you default because our arrangement is not in writing.

In other words, there is no binding agreement between your uncle and me.

3. Cannot be Performed Within One Year

Any contract for the sale of goods for $500 or more must be in writing to be enforceable under the US Uniform Commercial Code (UCC). Any such agreement may only be modified in writing.

For instance, I promise to sell you a piece of equipment for $750. However, because our agreement is not in writing, you might be unable to enforce it through the courts if I decide not to uphold the deal.

Other contracts that must be in writing to be upheld in that jurisdiction may also be established by states. For instance, the majority of states demand that insurance policies be written.

Where the statute requires a written contract of frauds, the contract need not be a formal instrument. As long as it complies with the following requirements, any sort of written agreement that is adequately explicit and signed by the appropriate parties will often be sufficient:

The Act for Prevention of Frauds and Perjuries, which the English Parliament adopted in 1677, is where the fraud statute started. 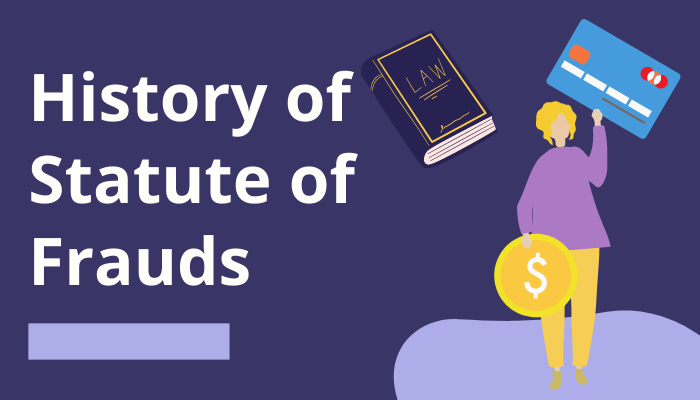 The legislation was designed to avoid some misconceptions and fraudulent conduct depending on oral negotiations. It required a written contract to be used for transactions where a significant amount of money was at stake.

The absence of written evidence during the period affected the English legal system. Due to the overflowing court dockets, disputes were frequently resolved through paid expert witnesses. As a result, fraud and corruption became commonplace.

The 1677 Act was used as a guide by the founders of the United States to establish how business disputes and transactions should be handled in the New World.

The founders decided that written and signed contracts avoided ambiguity by providing a clear record of the agreement, much like their 17th-century British counterparts. This lessened the possibility of eventual litigation and made it simpler to resolve such lawsuits when they arose.

Even agreements that, under the statute of frauds, would typically require a formal contract may occasionally be enforceable without one.

A few exceptions deal with instances where verbal agreements lead to the start of work or financial outlays. For example, consider a scenario where procedures are made to produce a number of specially crafted items, like monogrammed shirts.

The customer who commissioned them over the phone will probably still be liable for at least a portion of the cash if the customer later cancels the transaction.

The same will typically hold if alterations or enhancements made to a customer's property based on verbal agreements are started and subsequently abandoned.

Consider a scenario where a homeowner demands that a house painter remodel their home. The painter buys the necessary materials and gets to work.

After that, if the homeowner changes their mind and says there was never a formal painting contract, the contractor will probably win. This is due to a legal concept called promissory estoppel. It is described as a "basic fairness" idea meant to right a significant wrong.

There are instances of incomplete performance as well. The existence of a contract may be established by the fact that one party has fulfilled its obligations under it.

Requirements of the Statute of Frauds

The statute of frauds does not always provide legal protection for written documents. However, the following characteristics of the agreement are typically necessary for the contract to be regarded as binding and valid: 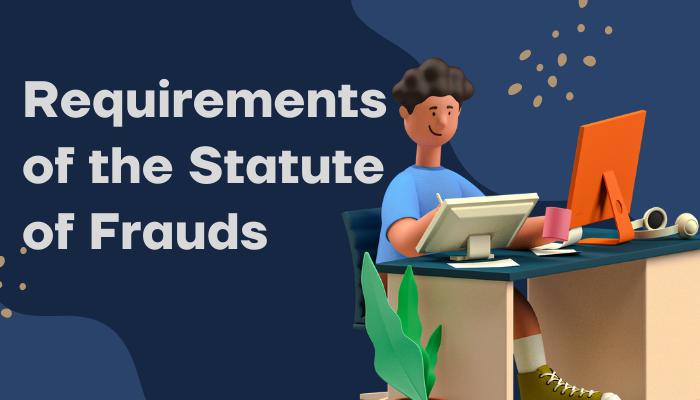 An official document is not always required. Instead, several letters between the parties outlining the contract's material provisions may be sufficient in some cases. For example, a private car vendor communicates with the buyer by email or letter to discuss pricing or other terms.

The eventual understanding captured in those discussions could meet the enforceable contract criteria.

An oral agreement later confirmed in writing and an invoice for the job performed can constitute a legally binding contract. This is especially true if the client doesn't terminate the contract within the first five days.

Under the statute of frauds, a written confirmation between merchants frequently suffices as evidence of an agreement.

Even though the statute would typically require a written agreement to be enforceable, there are various legal situations where an oral deal alone is deemed valid. 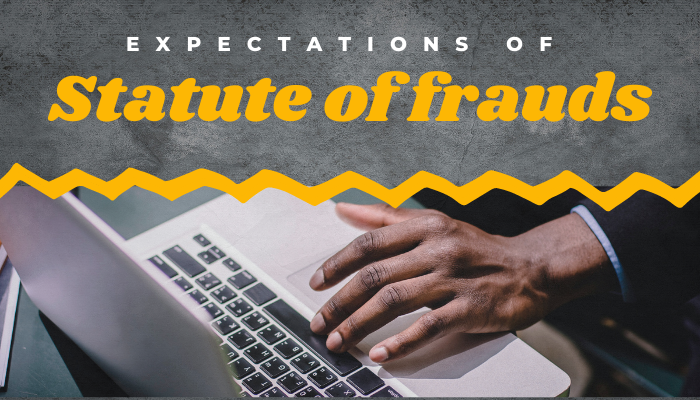 One exception is when the party seeking to enforce the agreement can prove that they took action based on an oral understanding and that at least a portion of the responsibilities under the agreement have been met.

The courts will typically decide that the oral agreement is enforceable in these situations, at least to the extent that the contract has been fulfilled.

A court will require the other party to pay for 500 shirts, for instance, if one party verbally agreed to create 1,000 t-shirts for another party at a certain price and has already manufactured and delivered 500 of the shirts.

The court can decide that the remainder of the contract is unenforceable because the oral agreement contravenes the statute of frauds.

An "easement by inference" is a real estate term for another exception to the statute's expressed requirement. For example, consider the scenario where Property Owner B is the only one who may enter Property Owner A's' property by crossing a portion of the driveway on Property Owner A's land.

A court will rule that an easement by implication exists and that there is no need for a written contract for the easement if Property Owner B can demonstrate that:

A contract need not always be in a single written form to be enforceable. For example, this would be the case when the contract is stated explicitly and agreed upon in letters shared between the parties. 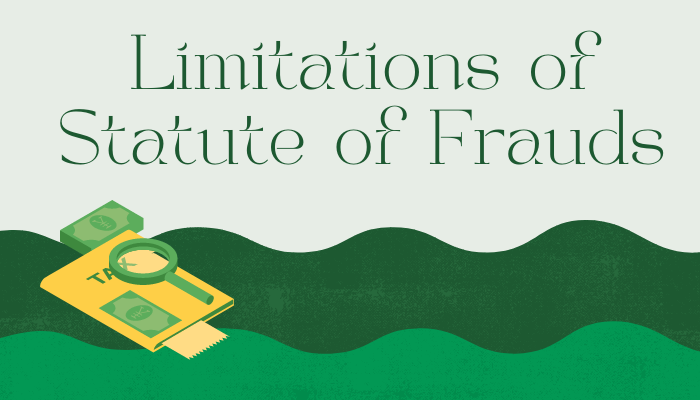 An example would be when a private individual selling a car talks with a potential buyer via email or written letters to discuss the price and payment terms. The arrangement can meet the criteria to qualify as an enforceable contract after both parties have consented to it.

Examples in the real world

In the US, state governments are responsible for enforcing the provisions of the statute of frauds, which are derived from federal legislation. A good illustration of this can be found in the United States Uniform Commercial Code (UCC).

Contracts involving money are subject to this standardized body of commercial law, which governs their terms. The majority of states have entirely embraced the UCC.

In situations where articles of the UCC are amended in a way that affects the statute of frauds, it may take some time for such changes to be reflected in the laws of every state.

Various states, such as Louisiana, have statutes of frauds and related rules that deviate from the standard. These differences have existed for a long time.

To continue learning and advancing your career, check out these additional helpful resources: