The Oracle of Omaha What did you do over the weekend? We sat in a room with no windows, took down 10 X-Large pizzas from Domino's, and pored over every word of Warren Buffett's annual letter to shareholders.

Here's what you need to know:

What drives Berkshire's continued success? Composed and calculated decision-making across (1) acquisitions, (2) revenue growth and improving margins, and (3) investments in stocks and bonds.

* Acquisitions to note: Pilot Flying J-"Far and away the nation's leading travel-center operator" run by "the remarkable Haslam family." With 27,000 associates, 750 locations, and Buffett's favorite metric, 5,200 showers, in North America, PFJ checked all the boxes for Berkshire. It plans to increase its current stake of 38.6% to 80% in 2023.
* Still, a slow year for acquisitions: Despite Buffett and his old pal Charlie Munger having $116 billion in cash and U.S. Treasuries sitting on their books, "sensible purchase prices" were simply nonexistent.
* How Buffett did in the stock market this year: Good, duh. And you might be surprised to learn Buffett's recipe for success is…do nothing. This strategy is best illustrated with the decade-long $1 million bet he won against Protégé Partners. The bet? Buffett was sure a low-cost S&P 500 index fund would perform better than an actively managed fund. The results speak for themselves… Buffett has plenty of other investments as well. Here are a few: On aggressive CEOs and the current acquisition frenzy-

If Wall Street analysts or board members urge that brand of CEO to consider possible acquisitions, it's a bit like telling your ripening teenager to be sure to have a normal sex life."

Our aversion to leverage has dampened our returns over the years. But Charlie and I sleep well."

When Poor Charlie's Almanack (yes, our Charlie) made its debut some years ago, we sold 3,500 copies at the meeting. The book weighed 4.85 pounds. Do the math: Our shareholders left the building that day carrying about 8.5 tons of Charlie's wisdom."

Outraged social media users rallied for brands to cut ties with the National Rifle Association on Friday in the wake of the Parkland, FL shooting. They listened. As #BoycottNRA continued to top the list of trending topics, an ongoing list of U.S. companies publicly dropped their associations with the NRA (such as discounted rates for members), including Hertz, Wyndham Hotels, Enterprise, MetLife, Best Western, Delta Airlines, United, and more.

Zoom out: Rarely does corporate America find itself so deeply entangled in political debate; as consumers demand NRA-affiliated companies pick a side, the gap between private and public sectors is bridging closer than ever.

General Mills went to the store for the essentials (milk, bread, and five gallons of its own Haagen-Dazs) and came back with $8 billion worth of pet food. Never shop on an empty stomach. The cereal giant acquired Blue Buffalo Pet Products, a purveyor of high-protein, natural cat and dog food.

With sales dropping for three straight years, General Mills has an appetite for growth. And with Blue Buffalo's robust sales growing 12% YoY for the past three, it will give General Mills a meaty presence in the premium pet food market.

Over the past five years, the industry has surged 33% as consumers start to care more about their pets' diets than their own. General Mills isn't the first food conglomerate to venture into the pet realm: Nestle's Purina division is a primary focus and last year, Mars expanded its hold with the $7.7 billion acquisition of animal-hospital chain VCA.

On Friday, the Chinese government took the remarkable step of seizing Anbang, a massive private insurance company, and indicting its former chairman with fraud. For the next year, Anbang will be managed by the Chinese central bank and financial regulators.

To get a sense of what happened, here's a useful comparison: it's as if the Fed, SEC, and FINRA all teamed up to restructure a company.

What was Anbang's crime? Officially: "illegal business operations." Unofficially: "growing too fast." In recent years, it's been spending money on foreign acquisitions like a teenager with his parent's credit card (see: $1.95 billion purchase of NYC's Waldorf Astoria Hotel in 2014).

Zoom out: China is making an example of Anbang to show other high-flying companies it's getting serious about debt. China's debt to GDP ratio is ~260%, which is high…but the real story? Corporate debt-at 160% of GDP, it's the most leveraged corporate sector in the world.

Elsewhere in China: The Communist Party proposed dropping presidential term limits, paving the way for Xi Jinping to lead the country…until he gets bored. He's the most powerful Chinese leader in decades.

It's not March yet, but for men's college basketball and the NCAA, there's already plenty of madness.

On Friday, Yahoo! Sports published more documents from the FBI's probe into widespread fraud in men's college basketball. It named more than 20 Division 1 programs, including Duke, North Carolina, Texas, Kentucky, and Michigan State (as well as dozens of top recruits).

Rewind: Last September, federal prosecutors charged 10 people in connection with a scheme that saw coaches receive bribes from agents. In exchange, coaches would recommend their services to athletes.

The bombshell: FBI wiretaps revealed University of Arizona coach Sean Miller spoke with agent Christian Dawkins (one of the 10 charged in September) about paying $100,000 to make sure phenom Deandre Ayton would commit to the school. You probably won't be seeing Miller calling any pick-and-rolls anytime soon.

Statement from NCAA President Mark Emmert: "These allegations, if true, point to systematic failures that must be fixed and fixed now if we want college sports in America."

TRIVIA
In which state did Bill Gates and Paul Allen found Microsoft in 1975?

APOLOGY OF THE WEEK

In response to temporarily closing several hundred UK stores because it ran out of chicken, KFC apologized by taking out this full page ad in British newspapers. 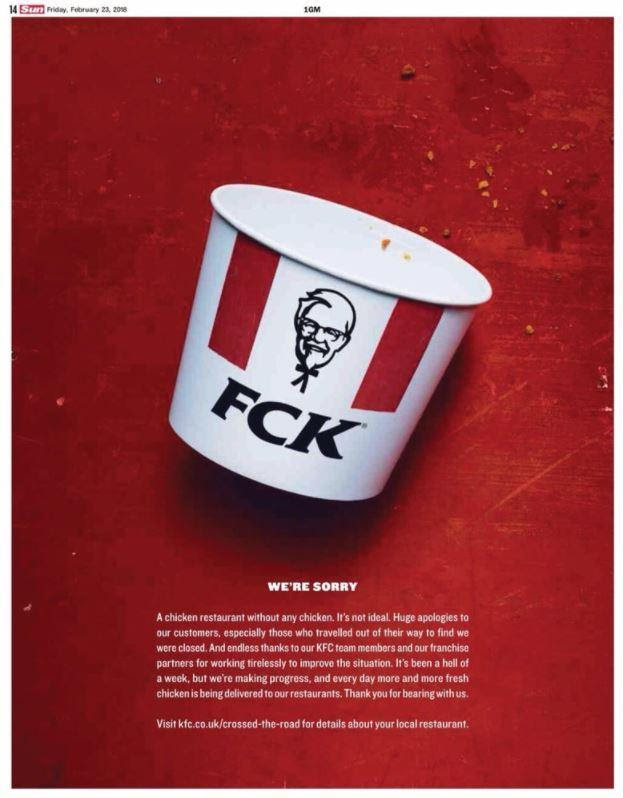 Question of the day:
$31 (Explannation)