The value of the entire firm

Enterprise Value (EV) is a measure of the entire market value of a firm (not just equity). It is calculated by taking a company's market capitalization, adding debt, minority interest, preferred stock, and then subtracting out cash & cash equivalents. 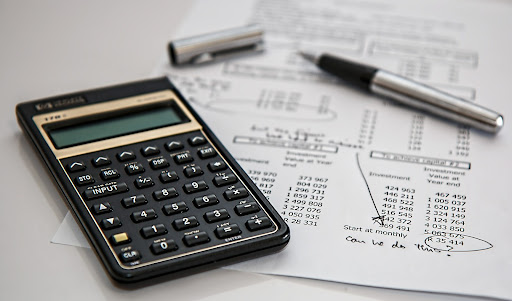 This measure attempts to provide a more accurate valuation of a firm's value relative to its market capitalization. Because EV accounts for debt whereas market capitalization does not, enterprise value is the choice of preference for measuring a company's value within portfolio analysis, mergers and acquisitions, risk analysis, and business valuation.

How can an analyst properly assess the value of a firm? While there are many different metrics to choose from, enterprise value offers a comparable and simple metric for deriving a company's value.

Market capitalization is found by multiplying shares outstanding by the current price of a company's stock. While this is a great way to measure the value of a company's equity, it does not take into account any claims on the business such as those from creditors and preferred shareholders.

EV is essentially a more thorough and complete alternative to measuring value compared to market capitalization.

Within the mergers and acquisitions process, EV can be used for finding a precise target price for buying another company. Companies can vary widely in their capital structure based upon which particular industry they operate in. Some industries require a business to have a large amount of debt, while others may not require much debt at all.

Here, EV allows comparability across companies because it factors in debt to the valuation. 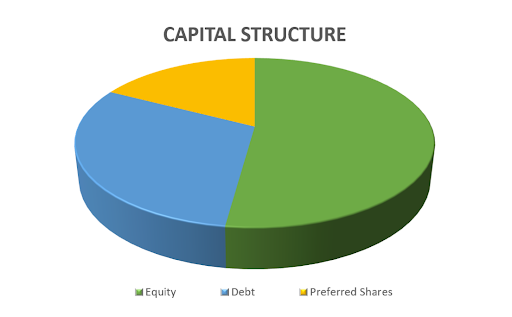 It is important for a potential buyer of a company to be aware of a company's capital structure in the acquisition process. The buyer will be required to make payments on the debt that is acquired. In some M&A transactions, the buyer may decide to pay off the existing debt altogether.

With market capitalization the degree to which a company is leveraged with debt would go unnoticed, but with enterprise value debt can be factored into a company's value allowing for a more accurate price to be derived.

An important reason for using the EV in most valuation calculations is the fact that EBITDA is the most commonly used value driver. Since EBITDA includes earnings available to both debtors and equity holders, it is used often with EV as part of multiple analysis, and hence its popularity.

Please check out the following video from our valuation course that goes into more detail on Enterprise and Equity Value.

Enterprise Value is a far better metric when considering mergers and acquisitions as it provides a 'truer' valuation on a company by considering more factors than market capitalization, the main one being debt.

The formula for calculating enterprise value is: 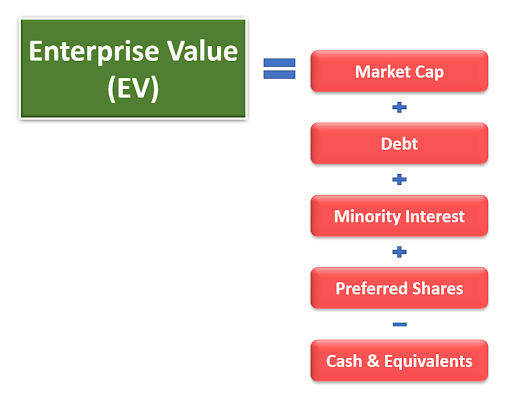 Why is Enterprise Value Used?

Using enterprise value to measure the value of a company allows an investor to make an apples to apples comparison between two companies with different capital structures.

Let's say there are two companies A and B with similar revenue and net income but Company A has significantly more debt than Company B.

Using net income and market cap leads us to believe that Company A has a higher value than company B (the result of employing financial leverage).

However, by using EV and EBITDA instead of market capitalization and net profit, you can see that Company A is not really better off than Company B because it has more debt while producing the same amount of revenue and net income.

Company B has $200 thousand in short term debt and $1.2 million in long term debt resulting in 1.4 million in total debt.

This difference in capital structure leads Company A to be 43.6 million dollars more expensive than Company B despite the fact that both companies have the same market cap with the same revenue and net income.

Just because Company A is equally profitable to Company B while employing more debt doesn't necessarily make Company A an undesirable target for acquisition. Considering the fact that Company A has $45 million in total debt while producing the same net income as Company B can indicate that the management of Company A is not using its capital as efficiently as it could be.

If an acquirer were to implement new procedures and policies to alter this dynamic, Company A could theoretically become far more profitable via efficient and effective use of its available capital.

Let's take a look at another example which will highlight why using EV is important. Company 123 has 150 million outstanding shares at a share price of $50. This results in Company 123 having a market capitalization of $7.5 billion.  Meanwhile by using EV to find Company 123's true value, we find that it should be valued at 8.2 billion.

The reason for subtracting CCE is the idea that CCE can be used to pay off debt instantly which reduces the amount of debt by an equivalent amount.

One of the most common uses of enterprise value is to use it within a valuation multiple.

The most popular multiple is EV / EBITDA and involves dividing the company's EV by it's EBITDA (earnings before interest, tax, depreciation and amortization). This valuation multiple allows you to compare across multiple different companies.

Why is cash deducted from Enterprise Value?

One thing you might wonder about enterprise value is why cash gets deducted. The idea behind this concept is that if a company has enough assets or liquid assets, they can pay back their debts with them instead of having to take out another loan - which would make the EV bigger than it actually is.

By deducting cash, what's left over will be the total value of the company plus any liquid assets that are available. That way, you're getting a better picture of what the company would be worth if it lused its liquid assets to pay off its debts. 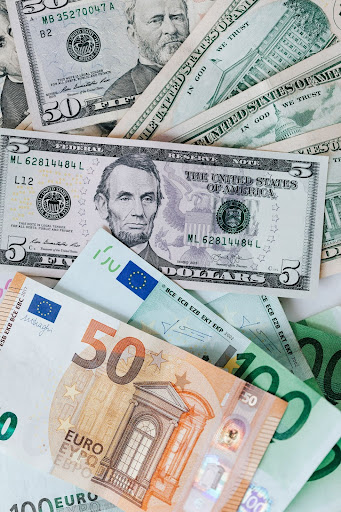 Another reason for deducting cash is that companies don't look more valuable than they really are just because they have lots of liquid assets on hand. If we were to not deduct cash, then two companies with comparable capital structures, revenue, and net income may have entirely different values if one company has chosen to keep a large amount of cash available.

Meanwhile if a company were to have too much cash on hand, this would result in a negative EV. This scenario arises when a company has more than enough cash to purchase all of its outstanding shares and pay off all of its debt.

While EV can be a fantastic metric for determining a company's value and potential target acquisition price, it can as well come with some limitations. Below are a few of the potential issues that can arise when using it. 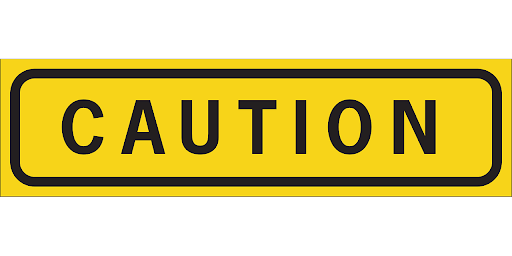