Accounts receivable days refers to the length of time an invoice takes to clear all Accounts Receivable, or how long it takes to receive the money for goods a company sells. This is useful for determining how efficient the company is at receiving whatever short-term payments it is owed. While accounts receivable days can vary from industry to industry, you are generally looking for a balance between giving your client enough time to get the money and collecting the money after the service as quickly as possible.

While calculating accounts receivable days gives valuable insight into the effectiveness of a company's collection process, it is an account focused approach. This calculation does not take into consideration the client behind the account. To supplement this shortfall, it is recommended to use other calculations, such as accounts receivable aging, to get a more complete picture of a company's collection process.

What is the Accounts Receivable Days Formula?

The formula for Accounts Receivable Days is:

For the purpose of this calculation, it is usually assumed that there are 360 days in the year (4 quarters of 90 days). Accounts Receivable Days is often found on a financial statement projection model.

Interestingly, a report on the technology company Apple recently stated that Apple gets paid for its products before it actually has to pay for them. In practice, this means that Apple's Accounts Receivable (AR) Days are lower than its Accounts Payable (AP) Days. This ratio is important because it means Apple can effectively ramp up production to the very maximum level of consumer demand and will never be limited by cash flow (not that it would be anyway with $100bn in the bank). Most companies are not in this situation so in order to avoid having production constrained by free cash, it is desirable to minimize the difference between AR Days and AP days.

In Apple's case, consumers pay for their products within 18 days but Apple does not have to pay suppliers for 83 days which implies they have money coming in roughly 4.5x faster than going out (this would be if they sold products for what it cost to purchase which they do not, in reality their income flow would be 9x faster or greater than their expenditure).

This concept can be slightly counterintuitive at times so an example is provided below to illustrate the principals.

Here's a simple example of an Accounts Receivable Days calculation using the formula we listed above:

Typically companies give their clients about 30 days to pay their invoices. Using the Accounts Receivable Days ratio of ~51.43 that we found earlier, we can then compare it to the 30 day company standard. When compared, it reveals that Company ABC is giving their clients nearly double their standard invoice time. Based on this, Company ABC should improve their collection process.

Imagine there is a company that only sells chairs and has $100 in the bank. Each chair costs $10 to produce and retails for $20. The company has a contract with its suppliers saying it will pay for materials 15 days after delivery but on average, its customers do not pay for products until 30 days (1 month free credit deal or similar) after purchase. So what does this imply?

Again for simplicity, we assume that the company receives the materials, converts them into a chair and sells the chair all within 1 day. So on day 1, the company takes delivery of materials for 10 chairs and sells all 10 to consumers and still has $100 in the bank. On day 16, it has to pay the supplier this $100 and will have $0 in the bank until day 31 where it receives $200 for the parts. This means that from day 16 until day 31, the company has no money and cannot produce so maximum profit per month is $100.

If the company were to reduce the time that consumers had to pay to less than the time in which it had to pay the supplier, it would get paid before it had to pay up meaning it could produce endlessly and never run out of cash. Now no company uses its entire cash reserves to order stock so the idea falls down a bit here, but the principal still applies.

The following video provides a good explanation of days sales in receivables or days sales outstanding.

To learn more about this concept and become a master at DCF modeling, you should check out our DCF Modeling Course. Learn more here. 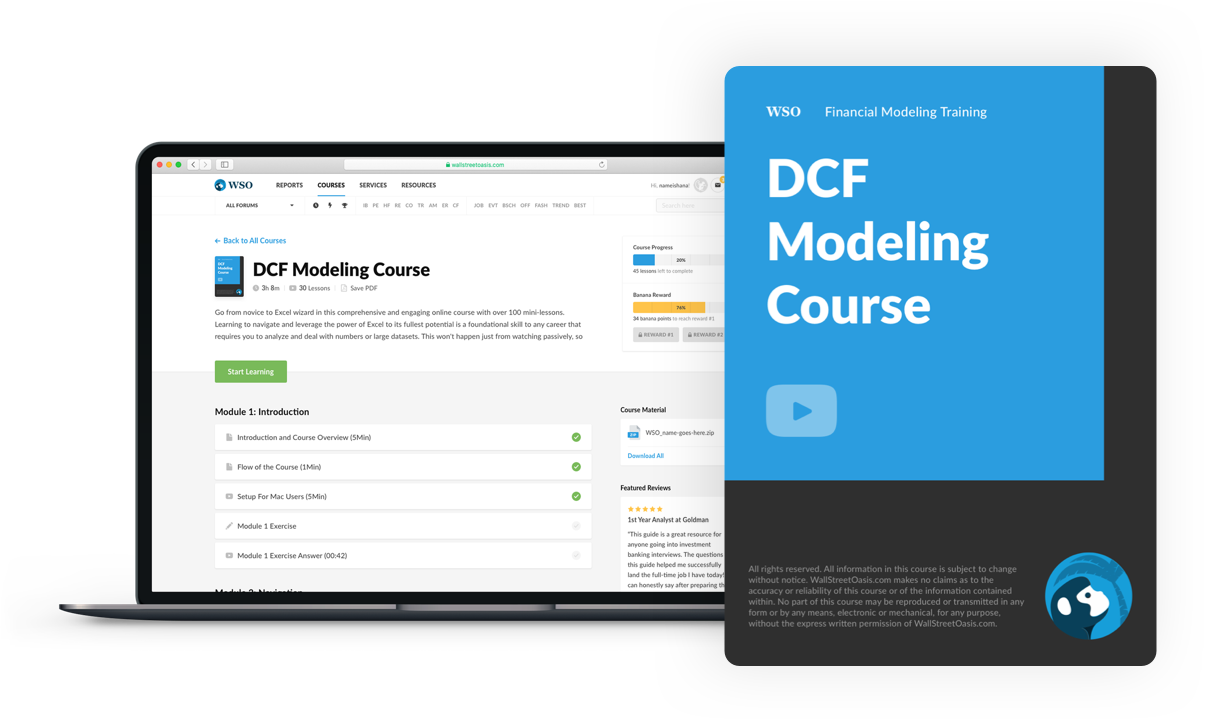