If you were to take a dozen hot business trends, mix in a dash of celebrity, and drizzle with smart home technology, you'd get Food Network Kitchen, a direct-to-consumer streaming service Discovery, Inc. launched in the U.S. yesterday.

But calling this a streaming service is like calling the iPhone a calculator. Food Network Kitchen offers subscribers a library of old cooking shows (like Barefoot Contessa), recipe guides/videos-and food delivery is on the way. But there's a star of the show...

The Peloton for cooking

Food Network Kitchen features live and on-demand cooking classes taught by celebrity chefs like Guy Fieri, Bobby Flay, and Martha Stewart. It's modeled after Peloton's popular spin classes, with one crucial difference: You can alert the instructor before you throw up.

Bottom line: Discovery remains an underdog in the streaming wars, but it thinks being your go-to sous chef is a good place to start.

In 2019, we repurpose plastic, cans, clothes-and Alzheimer's drugs. Yesterday, Biogen shocked the medical community by announcing it's bringing back aducanumab, an Alzheimer's drug it shelved earlier this year.

The backstory: Current treatments for Alzheimer's, the most common cause of dementia, only ease symptoms temporarily. They don't slow memory loss or deterioration of thinking skills.

The reversal: In March, a "futility analysis" deemed the drug a no-go. But Biogen looked at some new data with fresh eyes and determined it's ready for action.

Looking ahead...Biogen said it will file for FDA approval in early 2020.

People across the globe are pulling on their marching shoes. The protests' geographic coordinates are very different, but the complaints are not. Over the last several weeks...

In Bolivia and the U.K., grievances are more political-they're focused on an allegedly stolen election and Brexit, respectively.

Bottom line: Almost all of these demonstrations target a) economic inequality or b) government corruption. Residents of many countries feel the average citizen isn't getting a fair shot-and they blame those in control. 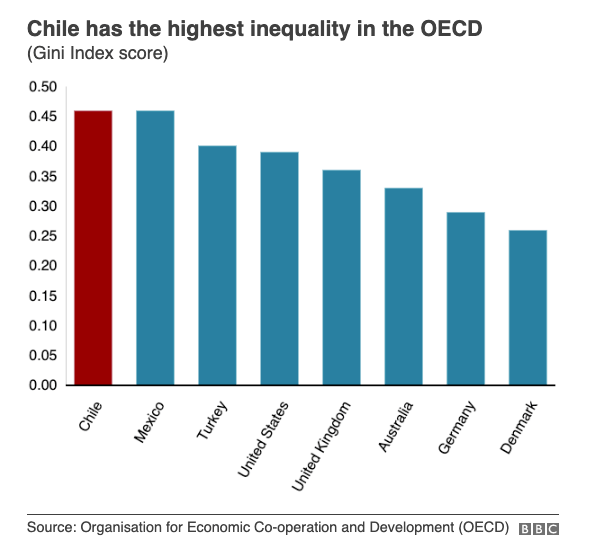 23 Years Is a Long Time to Hold a Plank

Kevin Plank founded Under Armour in his grandma's basement in '96, but yesterday, he said he'll be stepping down as CEO of the sportswear company. With $5.2 billion in 2018 sales, it's certainly come a long way from employees foregoing paychecks to buy ads on ESPN.

But the last few years have been hard
Stiff competition from Nike, Adidas, and Lululemon accompanied by losses and layoffs. Share prices since 2016 look like our jogging speed when we hit a hill...

Under Armour's particularly struggled to grow in North America. Plank's acknowledged customers "have a hard time getting their arms around where Under Armour truly wants to be."

Plank hasn't been perfect. There was the 2018 #MeToo reckoning. And his Port Covington development profited from tax cuts intended to help Baltimore's poor areas.

Looking ahead...Plank has until Jan. 1 to get COO Patrik Frisk ready for the big role.

Nike Couldn't Give Under Armour Just This One

Parker took over as boss from Nike founder Phil Knight in ʼ06. He'll remain executive chairman as John Donahoe, head of enterprise cloud company ServiceNow and former head of eBay, steps into the CEO and president roles.

Parker's helmed Nike through bumpy times, including controversy around treatment of athletes who became pregnant, a doping scandal, and Colin Kaepernick ads. Still, Nike shares are up 29% this year and it's shrugged off the trade war.

For the Gram
To prepare you for World Series Game 2 tonight, take a look at these lines about baseball and see if you can spot the errors or mistakes (courtesy of the WSJ editors).

For the Gram
1. Assuming the baseball doesn't have medicinal properties we were unaware of, this should be "came on the heels of."
2. The way the sentence is currently structured, it says the players are a barren wasteland, not Las Vegas.
3. The past tense "sank" is preferred. "Sunk" is better reserved as "has sunk."
4. "Latter" means the second of two. When three factors are involved, like in this case, the third item is "the last."
Region
United States - Northeast
United States - West
United States - Midwest
Canada
Hong Kong
South America
Middle East
Log in or register to post comments