Reading a lot of posts that recruiting is not fair and some people are just handed their offers because of various factors and I believe this view is truly misleading. I just graduated and I feel if I read all these posts as a rising freshman I could get discouraged so thought of sharing my view/experience.

Sure, the recruiting process might not be perfect, but I can guarantee you it is one of the most democratic and fair processes I have ever take part in. There are industries/countries where getting even a mediocre job/role is extremely hard if you don't have the right connections. Here it is undeniable that if you can prove a bank/investment firm you're the best candidate, you will get hired. Period. If you want to tell you that diversity/nepotism/ecc. is what prevented you from getting an offer sure go ahead but I would strongly recommend you start taking more responsibility. I went to a semi-target and I have seen non-diversity international students getting several EB/BB/PE offers. These kids come to the US with literally no connections and they are willing to put their head down until they are the best candidate at their school. I'm joining a mid-BB I'm very happy because of WLB with but I would be an idiot if I would tell myself I worked as hard as some other people did. What bothers me is that some people go around and spread completely fake rumors to justify others success and this can discourage others.

There is an international girl I know who grinded like hell from the first week on campus and is going to a top EB and I've heard several people saying "well, she is diversity, I could never do as good as she did". There is another kid who grew up in a very modest family, couldn't attend a more prestigious school because of lack of financial aid, and he is going to another top EB (first kid in a few years to get that group from our school). And people still make excuses to justify his success without realizing this kid has read every possible book about banking/investing and speaks like a 30 years old HF analyst.

I truly hope this post can help students starting college to realize that it is totally up to you to decide how much work you'll willing to put in. Nobody is forcing you to spend your first 2 years of college to grind, but if you do, I promise you that you will be rewarded.

Great post, helped me going through my daily imposter syndrome crisis so thank you

+1. Spot on. I did not come from a target, had a chip on my shoulder with something to prove and as a result, dedicated about a year of my life to breaking in. That meant over 500 emails sent, hundred or so calls with individuals at every IB firm you could think of and made damn sure I was getting a first round. Just hustled my ass off and got an offer. This process just shows who really wants it

I'd agree with this sentiment. Frankly, in my opinion, the process is really about how much effort you're willing to put into networking and meeting people (perhaps an essential skill in a field noted for its highly competitive environment that requires top notch sales ability).

I did manage to come from a target and had everything in my court, but if I had not put the effort in on the networking and dedication side of things, I certainly wouldn't have broken in.

Now, even I'll admit that some of the girls I recruited with had it a bit easier than some, but they had the background necessary for success and they put the time and effort in to getting there. This annoyed me as someone who did not participate in diversity programs, but I even realize how fortunate of a position I was in when it came to recruiting for those jobs.

I had it way easier than many, even most. That never changed my dedication to finding the job, and it shouldn't change yours either. I know guys (non-diversity candidates) from my high school who went to super non-target schools and didn't have the nepotism connections and now work at GS/MS/JP, as well as a girl who went to an inner-city community college transferred to an HBCU and got offers at GS and Vista.

It's a matter of hustling, and everyone has to do it. Whoever you are reading this post, you can do it! You can get there! You have to put in the effort like everyone else.

And if you strikeout for SA, you'll always have another chance to recruit for FT. And if you strike out for FT, you'll still be able to apply again or to other banks. Seriously. It's not a super risky process. You just need to put in the work. Hold your head high and keep grinding.

I agree that if you put your head down and grind you can totally land an offer. I also feel that some people are handed offers that didn't work very hard for them. But people do exaggerate and it isn't as much as people say.

Yeah, agree. When people say meritocracy they think of a 100% fair and objective world, but truly, biases exist and will continue to exist. There will never be a truly meritocratic society in the same way as there will never be a communist society. It's sounds good in theory, but human nature can't support those systems. Nevertheless, if people in US cry about meritocracy, what could be said about countries like Russia or India where getting jobs because of connections is as normal as breathing?

On a more personal tone, I think that meritocracy should be mandatory on public jobs, but on the private sector sometimes I may not want the best candidate and instead I would want to get a foreigner or someone with a total different skillset just to change a little the air on the office (even if they aren't the most qualified for the job compared to others). And no one can force me to do otherwise.

At the end, only trading or entrepreneurship is truly meritocratic.

I mean the issue with trading is you'd still need to get hired (similar to IB). For entrepreneurship, think about who determines who gets funding (believe me when it's nothing but an idea/ super early and not making money, the top criteria is not 'merit' - usually more of a who knows who). Obviously different story if you bootstrap (I guess that's true merit... except where would you have gotten the money to start a business? Family loans?)

So yeah, I think we should think of meritocracy as a spectrum rather than a yes or no. Places can be more or less meritocratic. Relative to the rest of the world, the U.S. is pretty meritocratic. It still has room for improvement though, e.g., on social mobility it's ranked 27th

Wanted to add another interesting graphic I found. 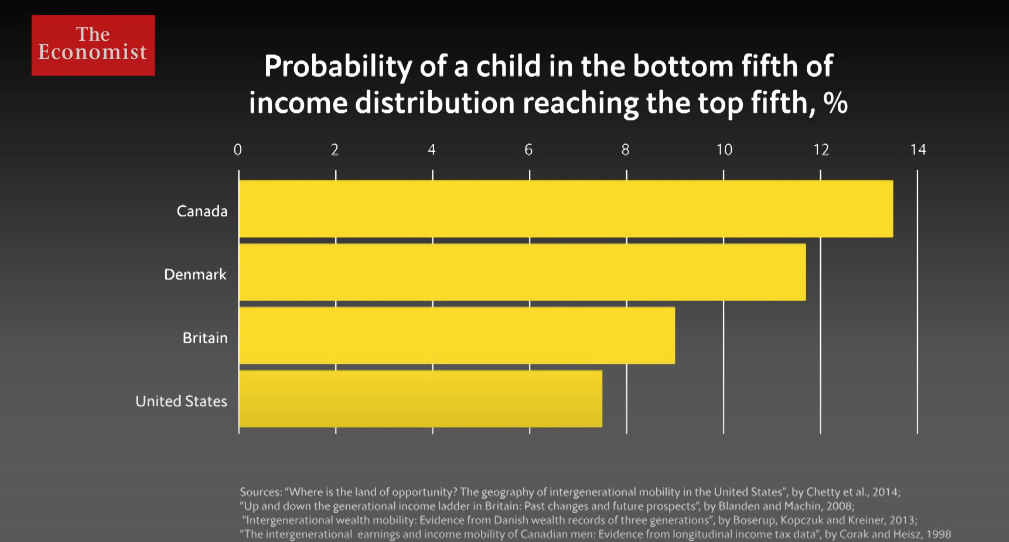 bro people like you ruin the fun and will get this site into becoming twitter 2.0.  Don't ruin the freedom of speech on this site we already have.

Ah yes, because finance (full of rich, privileged white/asian straight males at the upper echelon and most selective shops without DEI programs) is very unracist. Not sure about the incel part, but being racist and being an incel has no correlation.

Even if you work really hard you can still perform poorly, I know people who have been working their ass off for 5-years to land a simple internship. And I know people who achieved it in 3-4 months putting in 1% of the amount of work that the people above did.

They simply landed the offers because they performed better in writing resume, personal letter, interview, networking etc which is what matters at the end of the day.

I'm technically "diversity" but got a top bank through the regular process. I missed all the diversity deadlines and the seminars. Although on my application I put "hispanic" (I am) but not sure that did anything cause all the diversity slots were filled. Interview was easy, but all BB interviews are easy.

I don't have imposter syndrome because I grind like a mf. I'm so hungry that I can guarantee you I know more than the Wharton hardos. All the information is so accessible it's crazy. I'm eating straight textbooks for breakfast, lunch and dinner. You can kill a 300-500 pg. textbook in like a week with a few hours of reading each day. No excuses. If you're not putting in the work, people will know. Don't be that guy/girl that got the job cause the barriers were lowered. Be the person that would have got it anyway.

Wow, how do you manage to read textbooks that fast? Do you skim most of the material and take away just what's important? I notice the faster I read, the less information I actually take away from the material.

I'm reading on one monitor and on the 2nd monitor typing up notes on the key sentences/concepts. Assuming you read for 2-3 hours for 7 days, that's 14-21 hours per week. At 2 minutes per page, that's 280-420 pages per week. Some of the pages in textbooks are just graphs, so you can look at those briefly. There's usually one chapter in the book that's irrelevant or just way too niche to actually be useful, skip it. As you read more and more finance related material, you'll also be able to read it and understand it quicker. The first time I read Investment Banking by Rosenbaum, it straight up took me 5 minutes to read one page because I had to stop and google search the jargon to get definitions and it was extremely painful. Now I can skim it quickly and appreciate the material, making it a much easier read.

I'm not looking to become an expert and retain 100%, just enough to be able to have a conversation with somebody, contribute a little, and have them walk away thinking, "wow, this guy is definitely reading stuff on his own and is genuinely interested". It's crazy because I'll get on the phone with people to network and usually don't have to ask for a recommendation. I talked to a PE guy at a MF (non-alumni) and he straight up told me, "Have you heard about our analyst program? You should apply".

Can you PM me please?

EB is Paradise
+275IBby Analyst 1 in IB - Cov
It seems like there is so much wasted potential in IB
+142IBby Intern in IB - Gen
How to pick the right bank to run M&A sale process?
+130IBby Director in PE - Other
Is IB Fun?
+104IBby Prospect in HF - Macro
What has been your total compensation progression in your career?
+71IBby levijod
What's up with CVP's exits?
+60IBby Analyst 1 in IB-M&A
Another fucking shooting in NYC subway
+49IBby jgyaero
EVR vs Citi (London IBD)
+44IBby Analyst 1 in IB-M&A
Cannacord Genuity Comp
+41IBby YabberShneebs
When Does the Pendulum Shift
+36IBby Prospect in PE - Growth
END_OF_DOCUMENT_TOKEN_TO_BE_REPLACED