EDIT: S/O to @wallstreetintern and @litquidity for the features (link / pic below)

This might seem old and repetitive, but yes, I want to complain too. Wells Fargo IB is not the place to be right now.

Banking has become more of a taxing job than it has been recently because of all that's going on (we all know this). It's a sweatshop over here and everyone is putting in 100-hour weeks like it's nobody's business. There's nothing being done. At all. They might think that telling us they're going to "invest in junior banker resources" will make it all better and dandy... but guess what? It doesn't do jacks**t. Actions speak louder than words.

Why is it possible for a human (not actually 1 human, hundreds) who was being fed during less strenuous times to be begging management for food 12 months later? Yes, some analysts here made a deck too and passed it around and it made its way up the ladder (supposedly, who knows lol). It's been out for months now and we had brought this up way before then.

Jokes are over, this is ridiculous. Charlie Scharf's goal is to triple IB revenue in 5 years. Charlie, invest in the junior bankers that will carry the bulk of that load, or there won't be any to invest in within 5 months. I just want to eat man... You can keep the 20k lifestyle bonus... but I might take a peloton too tbh... IF YOU'RE SO GENEROUS AND THE CULTURE IS SO GREAT. 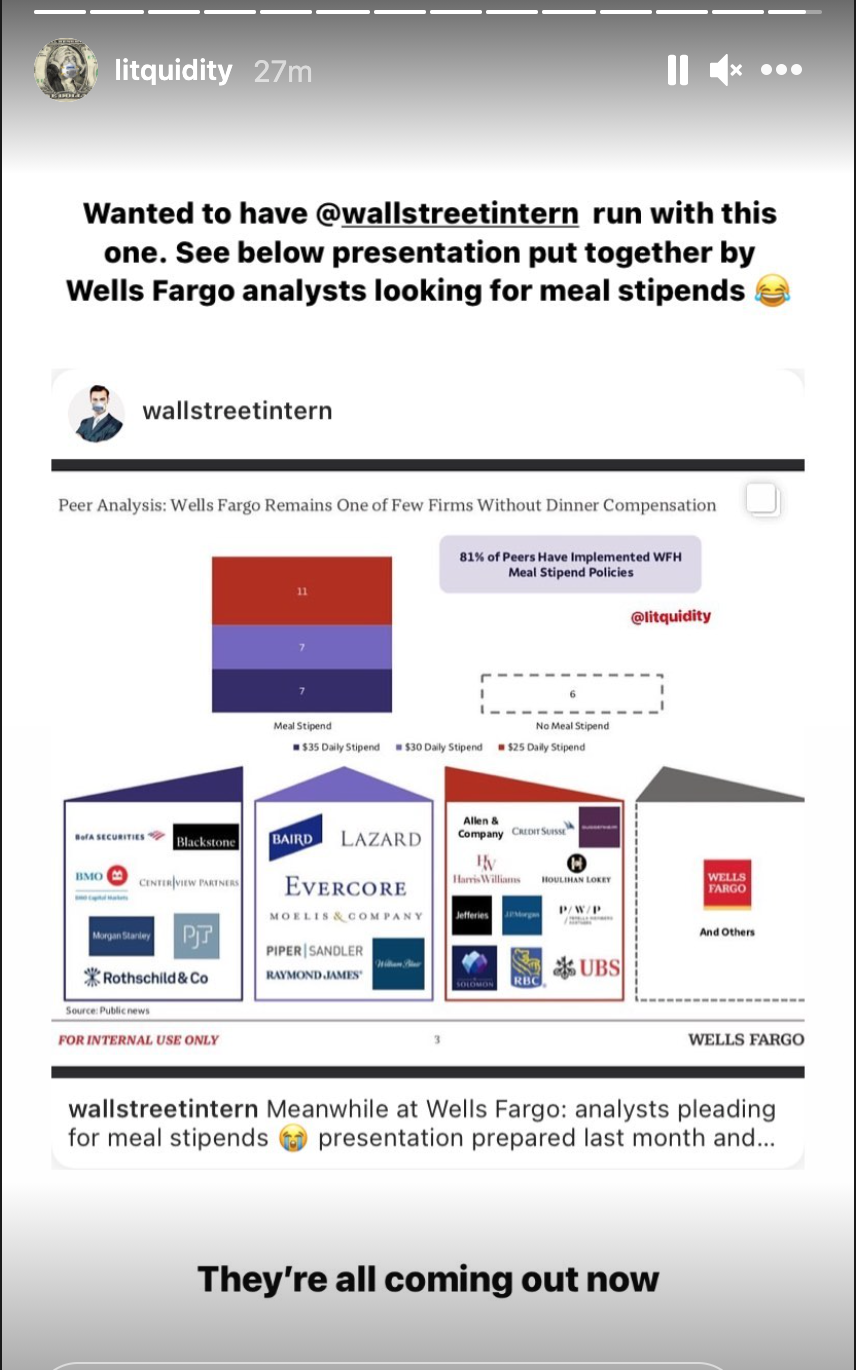 All I can say is, who knows what it'll look like by the time you might actually work here in 2022. I hope to dear God they at least feed you.

My roommate is at WF and it's not that bad... what group?

I don't think that matters here lol... this man/woman is hungry...

TMT, HC, RIB, IND all getting absolutely smoked. Senior leadership does not care either

Have you heard similar things about FIG?

I don't see TMT on many IPOs, what are they busy with? Guessing a lot of financing...any advisory work?

What group are you in?

Also work for WF. Thank you for posting this.

WF IB here, can confirm. This is ridiculous. Not surprising that they're losing people

What group are you in?

Are analysts or associates leaving?

where can i find the deck?

Your wish is my command.

Barclays now offers $25/night meal stipends, in case you're bringing this up again to mgmt

Thanks, this is definitely eye opening as to what peers are doing! Hopefully "radical transparency" becomes the new normal. Public shaming is the only thing that's getting results.

Holy crap! That's nucking futs. stifel is also providing $25 stipends as well if you are refreshing the deck

if gs doesn't get meals, why should you?

let's get this guy a peloton

It's laughable that WF continues to try and use culture as a selling point. The place is filled with MD's and senior management who couldn't care less about the junior staff. In typical WF fashion, we will wait to be the last Bank to move on reinstating overtime meals.

Was talking with a few other analysts and some of them thought we might not ever get meals paid for again- I hope that's not the case...

Wait what not even when wfh is over. Is the management stupid

This is crazy, I looked at the deck honestly you guys should have asked for more. I think I heard somebody say a while back second analyst bonuses were below par as well. They must just give you the meals in a few weeks and call it a day.

Somebody get the deck to liquidity, easiest way to get things done around here. You guys might get your meals by next Monday!

WF analyst here and completely reiterate the above. Always preaching culture but no actual action taken outside of our protected Friday nights and one weekend. We are being overworked (and in many cases just on aimless pitches and passive bookrunner deals not even deals that lead to good experience). The lack of meals is absurd and supposedly senior management is "figuring it out" but we're gonna be back in the damn office before they do at this pace.

A bank with this deal flow can't afford to be acting this shitty when the lateral market is as hot as it is. I expect post august bonuses there's gonna be some major exodus going on

100% plan on leaving after bonus hits

I for one, am MAD as HELL about this. I think I speak for a lot of others on here though when I say...if you could please switch those two logos in the light purple box on the peer analysis page before sending it out to the client, that'd be great (it kind of just throws off the whole alphabetical order thing you had going)...otherwise, looks great! Don't stay late!

just noticed this. is this the sort of shit IB analysts do? rearrange logos in the firms alphabetical name order? jesus.

Is this not considered a normal ask in other industries...? Maybe the grass really is greener on the other side

Who do you think does it?  Interns are only there for 3 months

Wells is a sweatshop. So many first year analysts leaving. The "pencils down" policy isn't even followed by many groups. Can confirm TMT, IND, Lev Fin are getting crushed

Incoming SA here. If first-years are leaving like crazy, does that nearly guarantee a return offer as long as I'm not incompetent? Not that I want to join a sweatshop but it doesn't seem like there are many non-sweatshops in IB anymore and hopefully it may improve by FT start in 2022.

That's generally the case every normal year as long as your not being lazy, a dick, or incompetent you will get a return

Also no more analyst are leaving than normal

I don't see them on many tech IPOs - what do they do mostly? Guessing a lot of financing. I know the tech team is in SF, does NYC do better since it's media/telecom?

Can confirm everything here. Analysts, Associates, and even VPs have been quitting. Wells is understaffed and analysts getting overworked.

Everyone wants to quit and they aren't doing anything about it.

Can confirm. We're losing people like crazy - the firm does not care about us. Students should know this...

Its on the news now on efinancial

Its on the news now on efinancial

That's your definition of "the news"? Yikes

Anyone know if bonuses will hit in July or August at Wells?

Don't worry my friend told me MUFG still runs out of Windows X95 and Excel 2003. Tech doesn't even know what Python is and NO MEAL STIPENDS.

As someone who's about to start, these threads are pretty depressing. Making me question whether I should call an audible.

going through the process now....would have been better to just skip banking

How long were you in banking and what level are you recruiting for in Corp dev?

This absolutely ridiculous. It seems as if social media posts to pressure these holier than thou firms is the way to go.

Citi also doesn't get a WFH meal allowance nor any other perks since COVID kicked off.

All they have given is two days extra days of leave (1 per year) and now "Zoom-free Fridays".

While the latter is being enforced so far, I don't know who asked for it and there are much more pressing issues than "Zoom fatigue". Besides, client calls (obviously) still go in on Friday.

incoming SA for WF corp banking. should i ask to be staffed on IB stuff if I want to switch into it? seems like a good time... wondering if its appropriate to reach out to MDs and offer help?

This is a great way to not get a return offer. Do not do this

incoming SA for WF corp banking. should i ask to be staffed on IB stuff if I want to switch into it? seems like a good time... wondering if its appropriate to reach out to MDs and offer help?

This is a good way to piss off the CB seniors

I left Wells for a better bank this winter and while I work even harder than I did at wells, the experience is so much better. Always on live executions vs aimless pitching. New group barely even has time to pitch bc we have so much live deal work.

If anyone is thinking about leaving, do it. WF experience kinda sucks looking back at it

Wells needs to give us a bonus like all these other banks are doing. And to make up for the fact we've gone without meals for the past year... #FuckTheStagecoach

If it makes you feel better I'm sure that CS is going to screw everyone next year after latest fiasco (which was no one in IBs fault). Wells should probably be more generous with bonuses next year given the circumstances along with CEO comments and results for CIB. But then again who knows...

Thanks. Sample size wasn't huge, but from Patrick's recent survey it doesn't look like people at WFS are as miserable as some of their counterparts at other firms. They should deff cave on the meal thing though, would only help matters.

Have they said anything about meals though

Best Analyst you’ve ever seen?
+73IBby davegrollman
Never been in a fight. Not a man?
+58OFFby Intern in RE - Comm
NON-TARGET TO BANKING FORMULA: 100% SUCCESS RATE (so far)
+44JOBby TiltedMonkey
Exit opps: I've crunched the previous work experience of 390 PE Associates..
+39PEby VP in PE - Growth
Medical School --> IBanking
+32IBby micoluvr
Impossible to date people in chiller fields
+31OFFby Analyst 1 in Consulting
Worried about getting an IB job after an arrest?
+27IBby ibpotential
Thank you, Mom and Dad
+23OFFby Solow123
Morgan Stanley - PAY RISE!
+22IBby Analyst 1 in IB-M&A
To those working in IB, what makes you feel inclined to respond to a cold email from a non-alumni?
+22IBby Intern in IB - Gen
END_OF_DOCUMENT_TOKEN_TO_BE_REPLACED