All statistics featured in the reports are based on 1,800+ user submissions from the hedge fund industry. The report includes data from 2015, 2016 and YTD 2017, with approximately 70% of the submissions coming from the United States. This dataset is growing fast, and is the most robust available.

Main categories are analyzed below with an emphasis on most relevant employers and key points of interest.

The total average compensation, including base salary and bonus, at hedge funds ranges from $163,000 annually for first-year associates to $453,000 for vice presidents (small sample size for this position). These figures represent data from 79 hedge funds.

Similar to the investment banking industry,hedge fund compensation also shows a correlation between career advancement and percentage of bonus in overall compensation figures.

Out of 43 firms, employees at Blackstone, Moore Capital Management and Citadel were most satisfied with their pay compared to similar jobs elsewhere.

This is in comparison to other industries like consulting where starting salary is around $80,000 base and rises to $320,000 at the director level. At a large technology company like Facebook or Uber, software engineers start around $75,000 but are capped at $271,000 as directors.

The exponential increase in comp from analyst to VP. Data up until November 2017.

Member submissions also provided information on the interview process, including the hardest and best experiences. To compile the statistics, each company is given an adjusted score using Bayesian estimates, which takes into account the number of reviews for a particular company with a minimum of two required. The results are representative of 56 firms.

Earning the reputation as having the hardest interview process are Blackstone, AQR Capital Management, D.E. Shaw and Bridgewater. A difficult interview process must be worth the effort as we learned above that Blackstone employees were the most pleased with their compensation compared to other hedge fund firms. 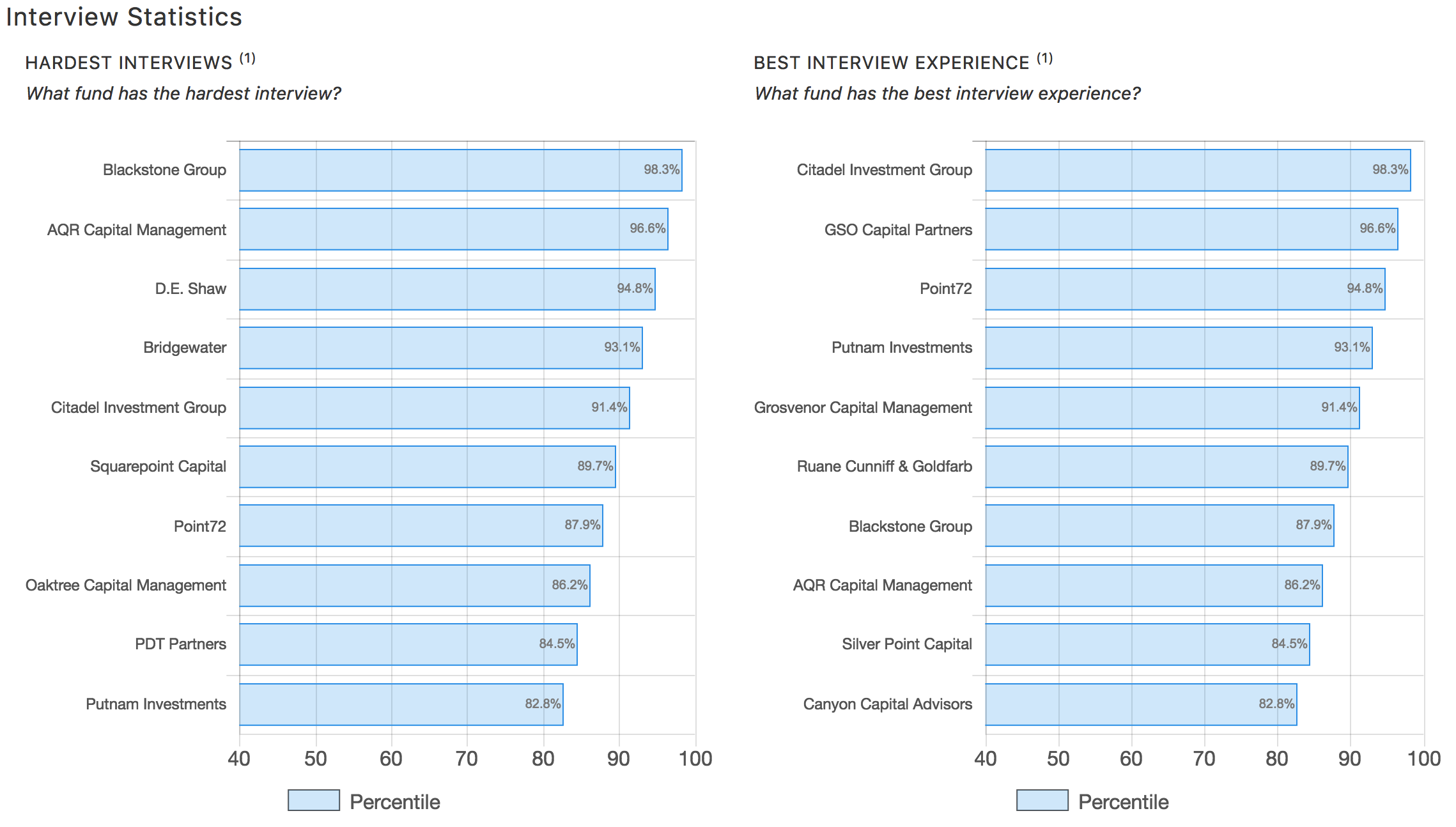 Hardest and best interview experiences across hedge funds. Data up until November 2017.

The professional growth and career opportunities section of the 2017 Hedge Fund Industry Report focuses on three sub-categories. We've highlighted the top 3 out of 43 firms in each sub-category.

Key Observation 4: Point72 was the sole hedge fund represented in the top three in each sub-category.

Member submissions also shed light on promotions and fairness within the Hedge Fund Industry. Again, we've highlighted the top firms in each sub-category.

Perhaps the most important evaluation of a company is what its employees say outside of work. In this report, reputation is defined by two factors, employee pride and whether employees would recommend the company to others.

Not surprisingly, top performers noted throughout the 2017 Hedge Fund Industry Report were also top performers in this category. Blackstone, Citadel, and D.E. Shaw earn the top honors for "proudest employees".

Blackstone, D.E. Shaw, and Moore Capital Management round out the top three for their firms being "recommended" to others by their employees.

According to an article in Forbes, D.E. Shaw has been incredibly selective during the hiring process from its inception. When they did hire, they extended an offer to candidates with a stronger background in science than in statistics or finance. In fact, one of their first hires was Jeff Bezos, who went on to found Amazon. 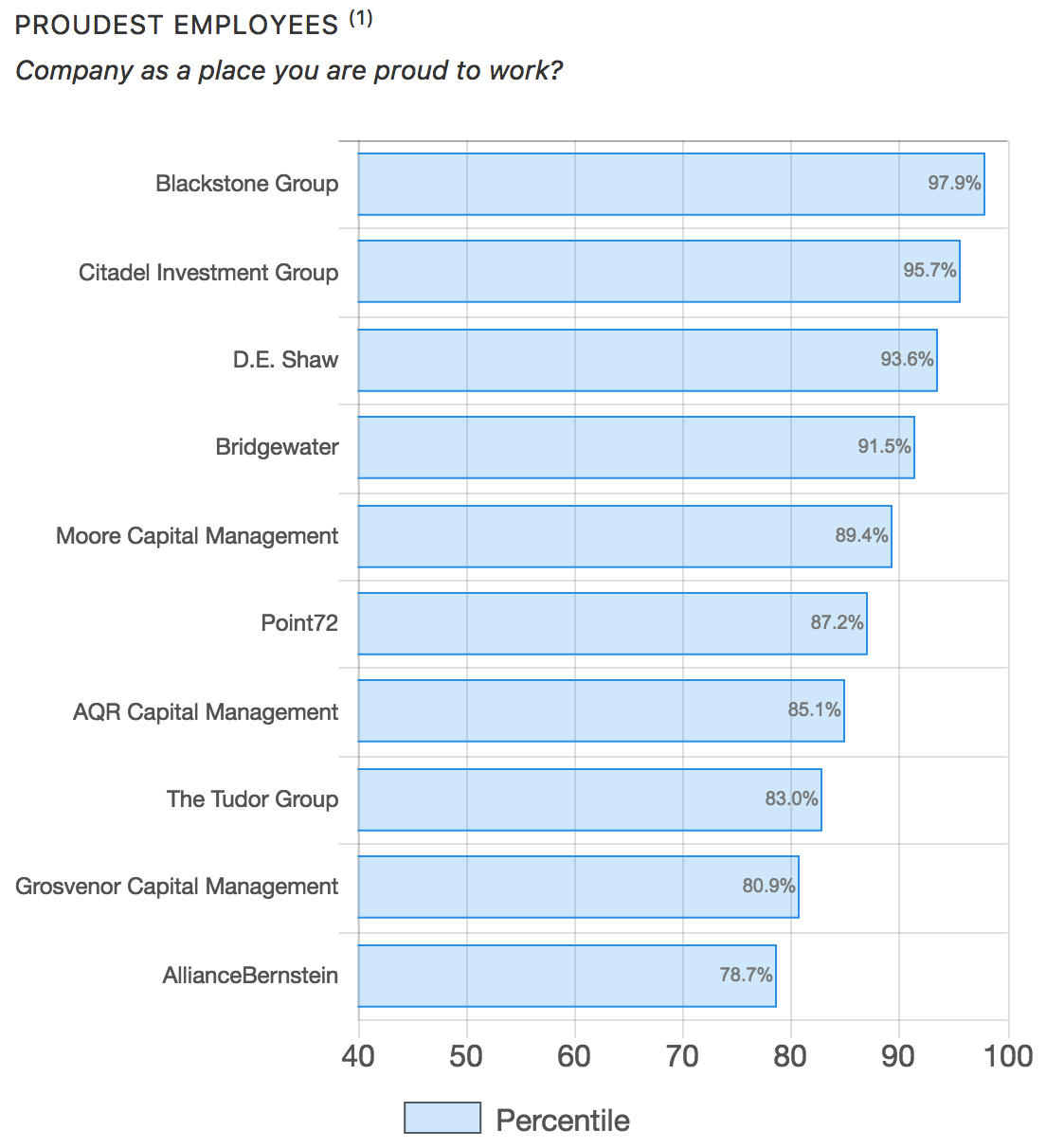 The proudest employees at various hedge funds, a potential proxy for reputation. Data up until November 2017.

The senior management statistics were generated from the following four sub-categories. We've highlighted the top three out of 43 firms in each sub-category.

The data suggests a strong correlation between opinions about senior management and the company's performance in all other categories, with the exception of top compensation, throughout the 2017 Hedge Fund Industry Report.

The 2017 Hedge Fund Industry Report also include respondents' opinions on which firms provide the most satisfying lifestyle as defined by three sub-categories. The top firms in each sub-category are listed below.

In comparison, Point72 employees average 62.9 hours/week and Bridgewater employees report an average 61.5 hours/week. AllianceBernstein does not rank in the top 30 companies in the report for most average hours worked. 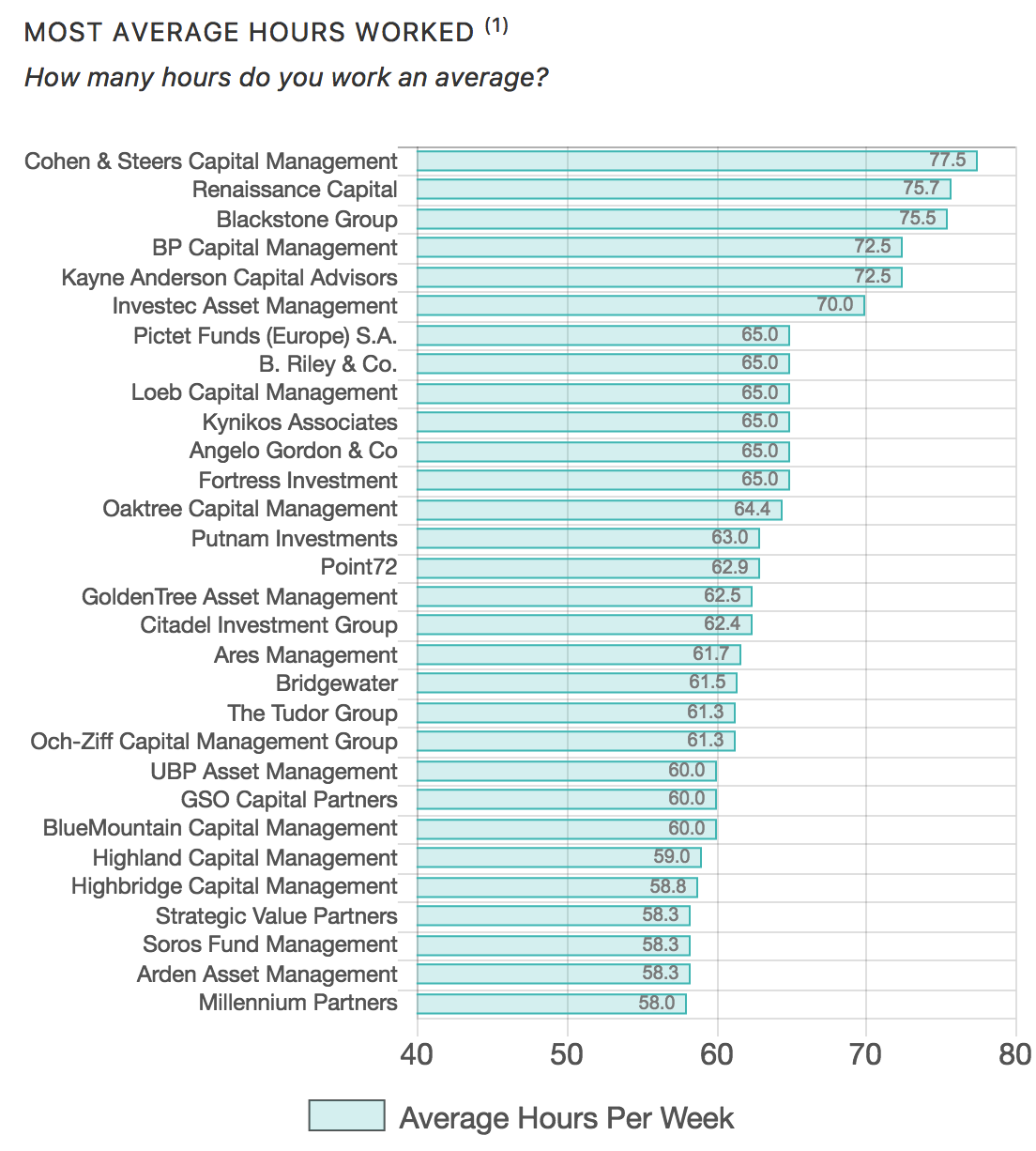 The hours worked per week, ranked highest to lowest. Important to note that some of these data points have low sample size (smaller HFs) Data up until November 2017.

In addition to the main categories discussed throughout this article, there are several other points of interest within the 2017 Hedge Fund Industry Report.

The 2017 Hedge Fund Industry Report provides key insights into the industry as well as important information for when analyzing your current employment or determining priorities in your job search.

For more information, including the most current data as reports are continually updated online, please contact Wall Street Oasis at [email protected].

Graphics Disclosure: Background vector created by Brgfx - Freepik.com // Designs by Freepik // Icons made by Freepik from www.flaticon.com is licensed by CC 3.0 BY // Edited by Ajay Patel

Why is AllianceBernstein on here? AB itself is an asset manager. Do they own hedge funds?

Why is AllianceBernstein on here? AB itself is an asset manager. Do they own hedge funds?

Yes, but it's not that big yet...probably Citadel hired 17 Visium PMs after that and launched the Aptigon platform with those teams.

AB then launched AB Arya, the multi-manager HF platform within AB at the end of 2016. See https://www.hfalert.com/search.pl?ARTICLE=170433

I know it's real because I know a couple people who have interviewed at Arya already.

This is good to know, thanks for sharing

To be honest the data is scrubbed (every submission reviewed each night), but if someone selects hedge fund as their industry and AllianceBernstein as their firm, then we tend to give that credence vs having to keep track of what each firm is jumping into or how each person classifies their position.

Clearly, there are some blurry lines when we are talking private equity to hedge fund to Asset Management...

The good news is the rate of submissions into the WSO Company Database has significantly skyrocketed since the release of these industry reports, so we're hopeful that the data we've been able to release on investment banking will be able to do the same for PE, HFs and consulting soon (and others soon!)...

Great work. It'd be interesting to see an analysis of purchasing power parity based on the fund's location. Ex: making $150k and living in Stamford, CT may be preferable to making $170k in NYC.

Why did Citadel not appear anywhere in this post?

"The code of competence is the only system of morality that's on a gold standard." - Francisco d'Anconia

great question...investigating (we may have excluded it by mistake)

ok, big oversite on our side...

Citadel is now showing up in the report (we will update the article ASAP). The reason it was excluded was that we made the decision to exclude companies that had both IB and HF selected as industries (so that BB banks wouldnt show up under the HF report inaccurately even though a lot of them have HF-type functions and some prop trading desk).

This has now been fixed and I am reviewing other potential firms that may have also been excluded incorrectly. We will update the article accordingly within a few days. Thank you for the heads up.

Citadel + Blackstone now included (way we were doing it before was not refined enough...now we have multiple filters/checks) and article updated.

While talking about work hours, do people include the travel time from home to the office and vice versa? Or is it the total time spend purely on working i.e. not even including lunch time etc?

Good insight in to the industry! Thanks!