A comprehensive breakdown & discussion regarding the near instantaneous collapse of FTX

Creating this thread to share a couple of the more compelling breakdowns of the current exchange meltdown we're all witnessing happen in real time over Twitter. This collapse puts the Mt. Gox scandal to shame in my opinion. I will be adding to this post as new stuff comes up that I find interesting/relevant, this whole thing stinks with a potent Epstein-esque odor - SBF's whole persona is manufactured through a fanfare of marketing and endorsements from major athletes, investors, and politicians across the US.

What do you think happens next? Who do you think goes down for this? The meteoric rise and fall of this company makes Enron look like the little leagues by comparison.

I posted previously about how sketchy SBF seemed back in March along w/ implications of Tether (which is seeing a ton of redemptions since this new debacle kicked off, unsurprisingly).

Full list of investors who have effectively lost everything. 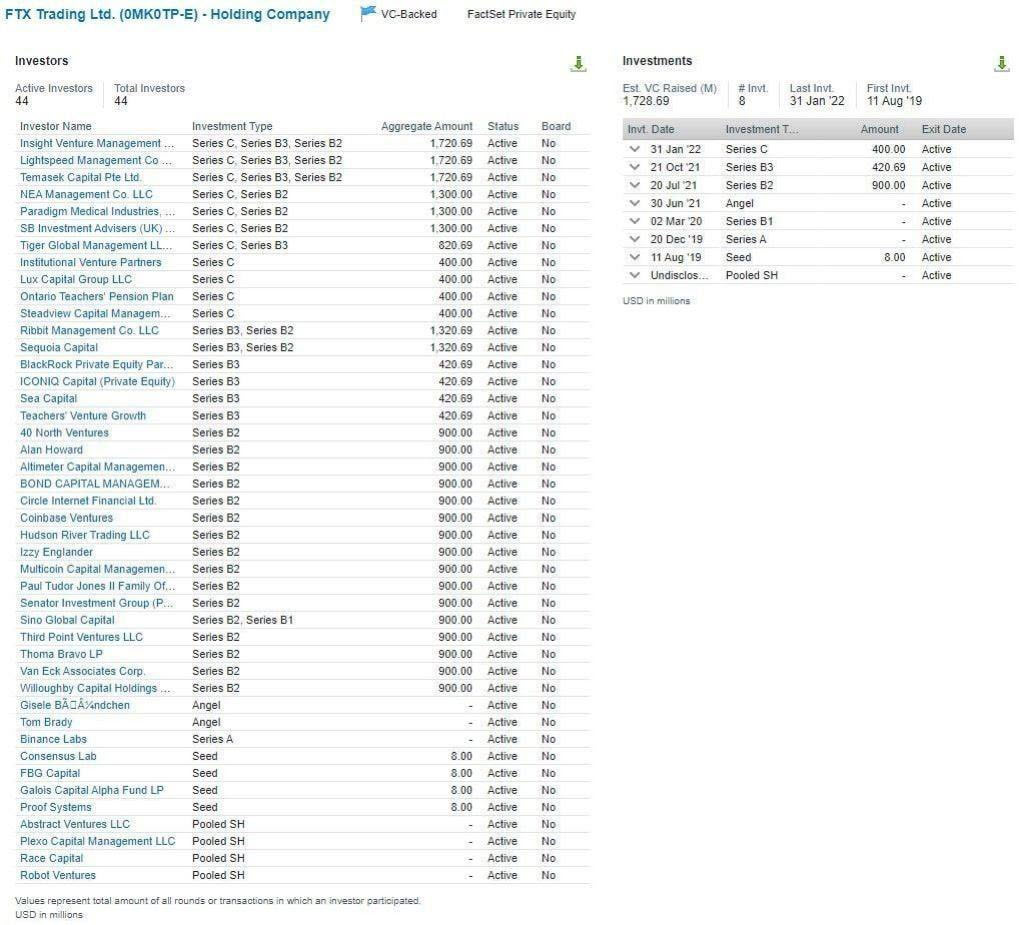 The most comprehensive breakdown for someone coming in fresh IMO is this substack of which I'll include an excerpt below (there are a ton of fun rabbit holes to chase).

It was an insane week for crypto.

Bahama-based crypto exchange FTX saw its valuation plummet from $32B to $0 in one day. It's founder Sam Bankman-Fried (everyone calls him SBF) saw his net worth evaporate from $16B to $0. 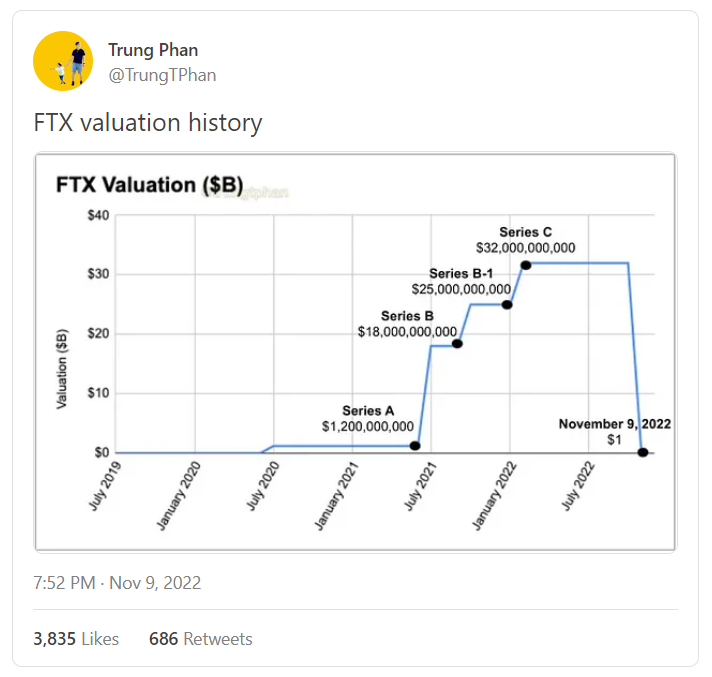 The SBF/FTX implosion is drawing parallels to the infamous energy trading company Enron: a once high-flying firm taken down by criminal financial engineering f**ckery.

In the case of FTX, the criminal element is the misappropriation of ~$10B of customer deposits (as a teaser of what's to come, SBF told Reuters that mis-handled funds were due to "confusing internal labeling").

Meanwhile, people have been live-tweeting the news non-stop (Twitter memes and financial scandals go together like peanut butter and jelly).

The saga is still ongoing but here are key points: 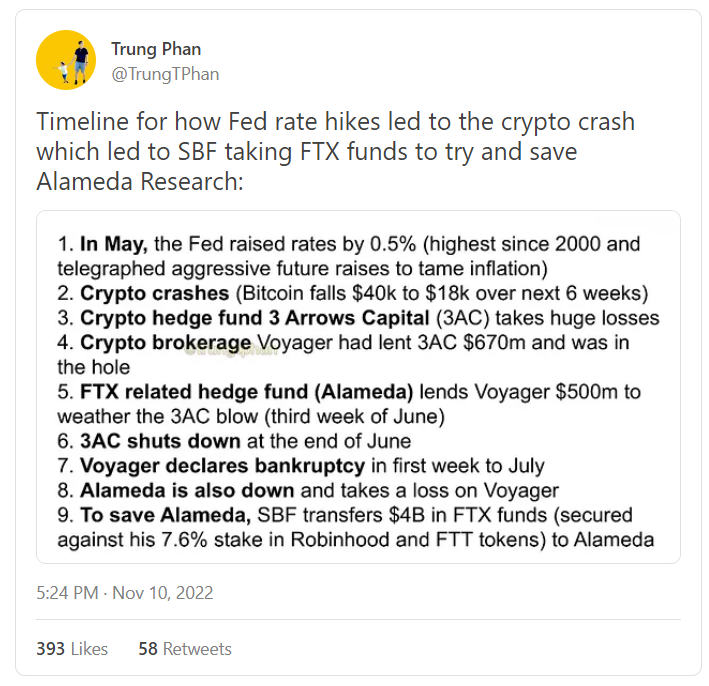 He's been cultivating such a carefully curated imagine it's hard NOT to be suspicious. Especially when you see what he's been doing with much of his inexplicably vast wealth, becoming the second biggest donor to Joe Biden during the 2020 election and one of the big whales in politosphere alongside names like George Soros.

Politico - How the newest megadonor wants to change Washington

He was also one of just a handful of donors who spent $10 million-plus backing President Joe Biden in 2020, and in the last year, he's hired a network of political operatives and spent tens of millions more shaping Democratic House primaries. It was a shocking wave of spending that looked like it could remake the Democratic Party bench in Washington, candidate by candidate. Looking ahead to the 2024 election, he has said he could spend anywhere from $100 million to $1 billion. 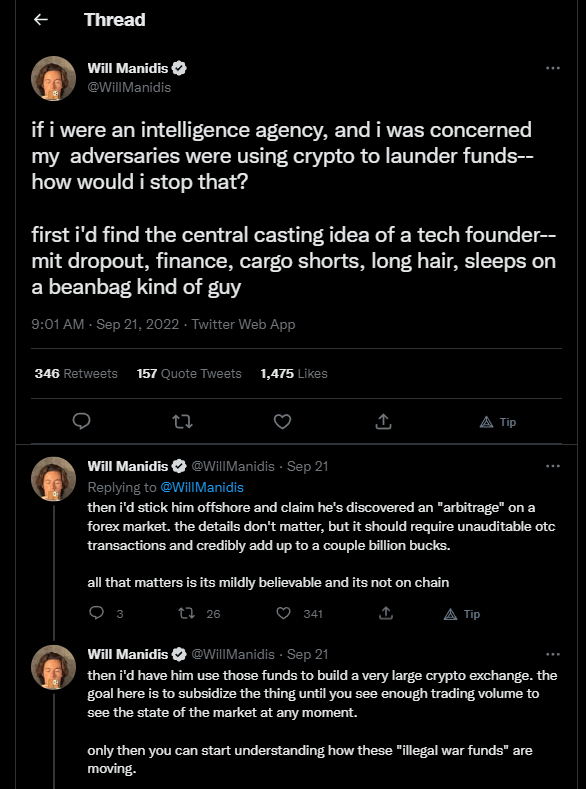 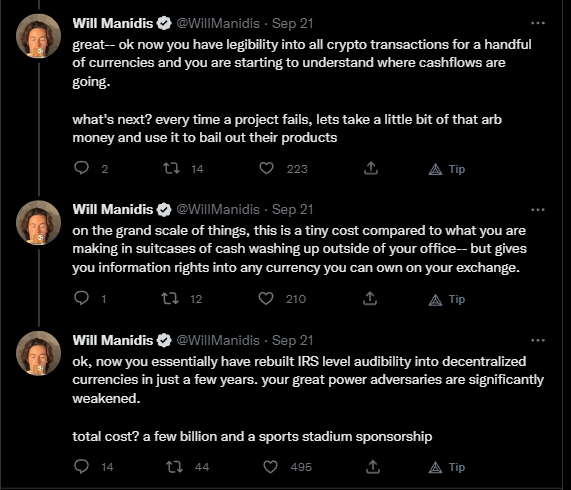 Some other crypto-related news that interestingly involved intelligence agencies running illegal ops out of the Bahamas.

Just 1 day after tweeting this one of the founding members of MakerDAO, a DeFi protocol which would have gone against everything that FTX and these massive exchanges stand for, was found dead in the water in Puerto Rico. 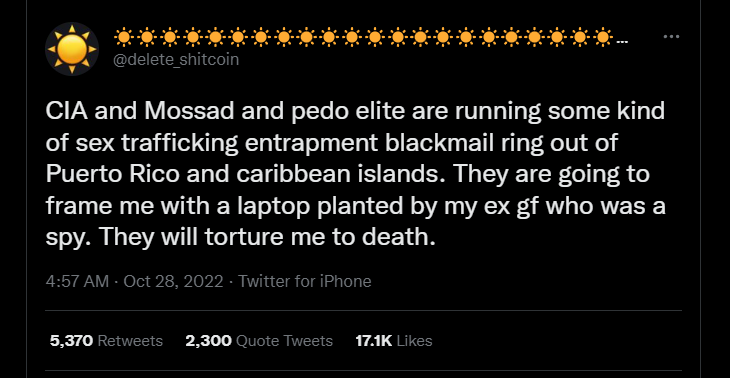 And some slightly more disturbing theorizing and connections being explored from Reddit when taking into account the above story.

And it wouldn't be complete without some greentext 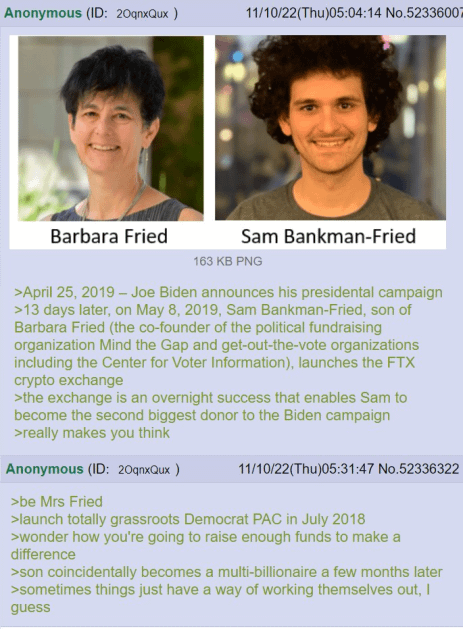 15d
I quit this site because of censorship, what's your opinion? Comment below:

The whole story is just so incredible and unreal. Just imagining people don't do their DD properly or question certain aspects but "blindly" invest and path the way forward. Also the involvement of Daniel Friedberg (former UniBet scandal), feels like a huge red flag going forward yet no one cared or did want to see it?

This is going to have knock-on effects in the equity markets, I would bet my left nut. Part of how the value of FTX hit 0 so quickly is because so much of their collateral was leveraged derivatives, but I have yet to see anyone reveal the notional they represented. Not to mention the reason they stole billions in customer deposits was to cover the losses of Alameda, so we still don't know the full loses that were realized but not booked from that.

Really curious what's in their books and what Binance might have seen / has seen and is further under the surface. And also what the trades were set up, counter party as you said.

14d
I quit this site because of censorship, what's your opinion? Comment below:

The whole story is just so incredible and unreal. Just imagining people don't do their DD properly or question certain aspects but "blindly" invest and path the way forward. Also the involvement of Daniel Friedberg (former UniBet scandal), feels like a huge red flag going forward yet no one cared or did want to see it?

Was this blind investing and poor due diligence or was this a case of white collar theft? Who conducts due diligence on the trading platform on which they buy securities or crypto? A fair assumption is that the CEO won't take your deposits to save his other company that is collapsing on a bad investment.

Referring to the investors, who decided to move on and finance all their rounds. Just insane to think they had so much trust or didn't screen either down the hole. When we tried to build our start up and discussed the first financing, it was pants down all the way.

Just my 2 cents but when I'd be investing into a platform that deals with money / exchange / crypto or anything with high risk profile (as from my POV it's still a Wild West market), I would at least wanna know who I'm dealing with, what makes them the right person, what their risk management looks like etc. Maybe I'm too skeptical of crypto but all these unicorn fairytale stories people wanna believe and invest in, which just got bust in recent years and it doesn't seem to end here.

Ackman is now in on crypto.