Ant Group, Alibaba's online payments arm, is eyeing a record-setting IPO that would reportedly value the Chinese fintech giant at a non-ant-sized $200 billion.

In 2011, Ant Group (then called Alipay) separated from Alibaba in order to satisfy Chinese financial regulators. Since then it has grown into a juggernaut-valued at $150 billion in 2018, it netted $2.2 billion in profit in the last quarter of 2019.

What does Ant Group do?

A better question might be: What doesn't it do? Bloomberg describes Ant Group as an "online mall for everything." The Brew describes it as a combo of PayPal, JPMorgan, and Amazon that's only getting bigger.

As with everything these days...
U.S.-China tensions lay just beneath the surface. Ant Group has decided to skip U.S. capital markets for its mammoth debut, choosing a dual listing in Hong Kong and Shanghai instead. It's a huge win for the Hong Kong Stock Exchange and Star Market, China's 1-year-old Nasdaq rival, in the fight to retain high-growth Asian tech companies.

Bottom line: Ant Group hasn't announced a timeline for its listing yet. But its decision to roll with Star Market and Hong Kong is a key milestone in China's quest to be technologically self-sufficient.

The Kentucky Derby and presidential election can only dream of the horse-race coverage coronavirus vaccines are getting. Yesterday, two favorites sealed their spots at the head of the pack.

First, a vaccine developed by AstraZeneca and Oxford University caused an immune response against COVID-19 in a study of ~1,000 patients, according to new research. The vaccine has moved into combined Phase 2 and 3 trials (Phase 3 = the last step in determining if it works).

A separate study from Chinese biotech CanSino showed positive antibody responses in a Phase 2 trial. The vaccine was less effective for patients 55+, but is still entering Phase 3 studies.

Zoom out: Exciting as these developments are, it's still early. The WHO acknowledged there's an uphill climb through larger scale, real-world trials ahead. But if AstraZeneca keeps its grades up and makes it to production, it has a $1.2 billion deal with the U.S. for 300 million doses this fall.

+ Follow the vaccine race with this tracker from the NYT. 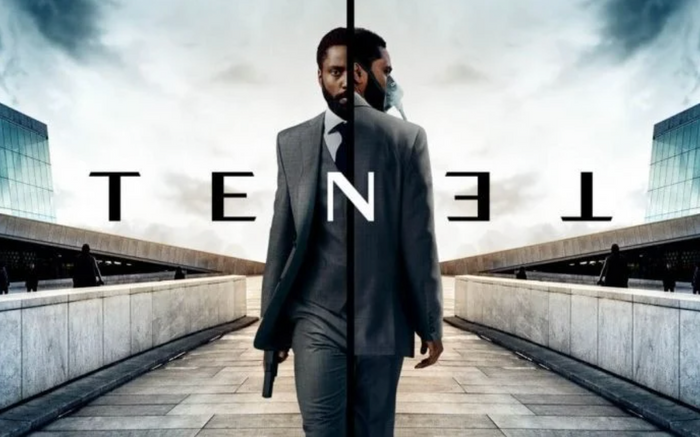 It looks like the coronavirus pandemic has taken over time-warping duties from Inception director Christopher Nolan. Warner Bros. announced yesterday it is delaying the release of the famous director's latest production, Tenet, indefinitely.

The backstory: Christopher Nolan movies at the box office are as close to non-Marvel slam dunks as you can get. So Warner Bros. has been ultra-careful (delaying the film three times now) to make sure Tenet has "the highest odds of success" during widespread theater closures.

Some options
Go overseas: While the U.S. is the largest movie market in the world, huge blockbusters like Tenet can generate up to two-thirds of their total box office haul from the international market.

Go online: With the success of digital-only releases like Hamilton on Disney+, some see this as the no-brainer option. But Christopher Nolan is a huge proponent of the theatrical experience and Warner Bros. will likely do what it can to keep Nolan happy.

Airlines in Search of a Defibrillator 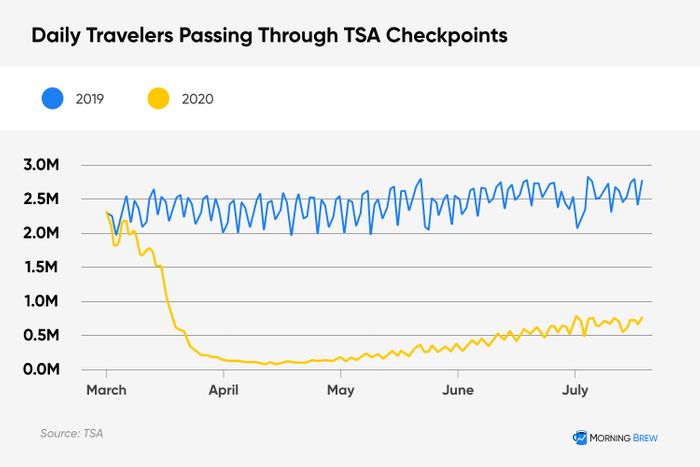 After a slow climb up from the depths of COVID-19 travel shutdowns, airlines are watching their business flatline once again. In the week ended July 19, fewer than 4.7 million travelers stood in their socks at U.S. airport checkpoints, according to TSA data released yesterday.

The more than 4% decline from the prior week marks the first weekly drop in air travel since April.

Zoom out: With rising COVID-19 cases crushing the summer travel season and their lucrative business travel segment collapsing, airlines are asking workers to hang up those pressed slacks.

Looking ahead...United reports earnings this afternoon, and American and Southwest will say their piece Thursday morning.

The Case of Microsoft 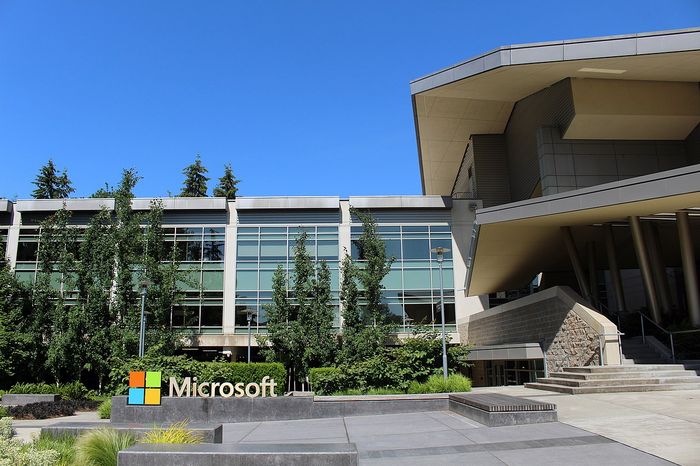 Next Monday, the antitrust subcommittee of the House Judiciary Committee will ask several of Silicon Valley's top CEOs to explain themselves like they're Justin Timberlake after the 2004 Super Bowl.

For a sense of what could happen...

Look to the past. In 2002, Microsoft settled a looong antitrust case over the practice of bundling its Internet Explorer browser with its Windows operating system.

The case also tested Microsoft founder Bill Gates-in a deposition, he answered questions so evasively the presiding judge shook his head and laughed. The execs testifying next week could learn something from Gates's poor performance.

+ For more...we wrote a guide for everything you need to know ahead of the antitrust hearing. Bookmark this page-more to come throughout the week.

Over the weekend, FiveThirtyEight categorized mascots across the WNBA, NBA, NFL, MLB, and NHL. Here are the results of that research. 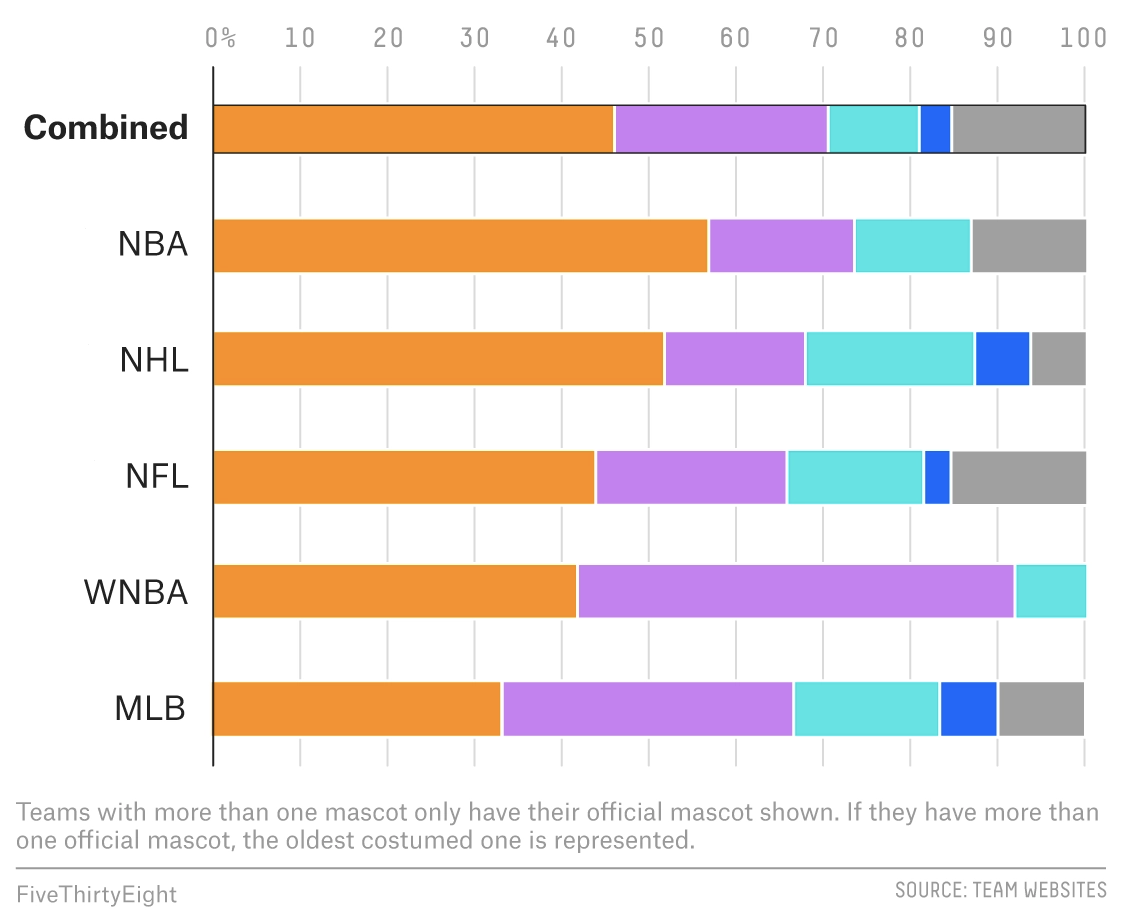 The question: Can you determine which color belongs to which category of animal? Your options include: sea, land, sky, make-believe, and no mascot.

Hey MorningBrewDaily, I'm the WSO Monkey Bot and I'm here since nobody responded to your thread! Bummer...could just be time of day or unlucky (or the question/topci is too vague or too specific). Maybe one of these topics will help: