For Global Investors, Life Is a Maze-ing

In trying to navigate today's zany political climate, investors must feel as though they've been blindfolded, dropped into a corn maze, and told the forecast calls for sleet and freezing rain.

All this unrest reminds us...

Have you heard the one about economists with too much free time?

They create indexes that measure global uncertainty. Here are the latest readings, per the WSJ:

Zoom out: The private sector looks to the public sector to inform investment decisions. Without stability, you might get what UBS Chairman Axel Weber has called a "broad-based investment strike" that is "politically made rather than made by markets. And that is a really bad environment."

That attitude was echoed at the IMF and World Bank meetings in D.C. last week, during which the World Bank's chief economist pleaded with politicians to get their acts together.

The S&P and Dow are around 1% below their all-time highs.

Get These People on a Treadmill ASAP

A Qantas Airways Boeing 787 touched down in Sydney, Australia, Sunday morning after 19 hours and 16 minutes in the air. The 10,100-mile trip from NYC was a test to determine the feasibility of operating ultralong routes as soon as 2022.

The first Chick-fil-A in the U.K. will be closed on Sundays...and every other day of the week. A mall in Reading, England, has decided not to renew its lease with the restaurant chain over criticism of the owner's history of opposing gay marriage. The location opened Oct. 10.

A local LGBTQ advocacy group, Reading Pride, led the protests. It posted on Twitter, "The chain's ethos and moral stance towards #LGBTQ people goes completely against our values, and that of the UK." What they're referring to:

The company said it was "grateful for customer responses to our food" and that the Reading location was part of a longer term international strategy.

Zoom out: Chick-fil-A may not be welcome in parts of the U.K., but it's the #1 restaurant among U.S. teens, according to a Piper Jaffray survey.

But instead of chicken let's talk about pork. Because as Bloomberg reports, it's getting very expensive.

African swine fever has devastated the hog population in China and elsewhere, causing pork and bacon prices to surge globally.

Looking ahead...prices will remain elevated in China and some neighboring countries ahead of the Lunar New Year in late January. People eat a lot of pork then.

Before we leave meatland, here's a Bloomberg snapshot of bacon prices around the world, because...the more you know. 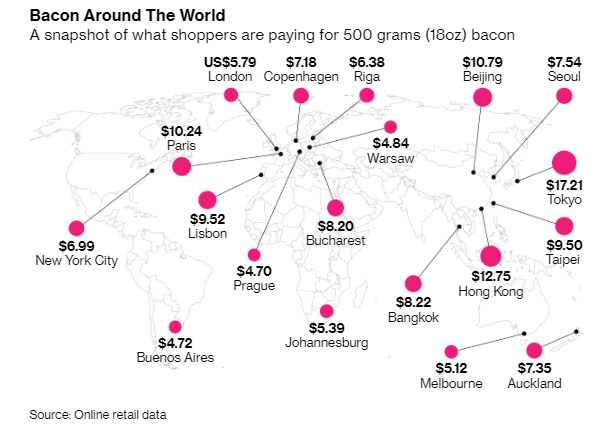 Today is the 60th anniversary of the iconic Guggenheim museum building in NYC, which was recently designated a UNESCO World Heritage Site. Do you know the name of the designer? Answer is at the bottom of the newsletter.

Choose the Bigger Number
1. Houston's population is much larger than D.C.'s. In fact, Houston is the fourth most populous city in the U.S.

3. Houston is farther from Orlando than D.C. is by just over 100 miles.