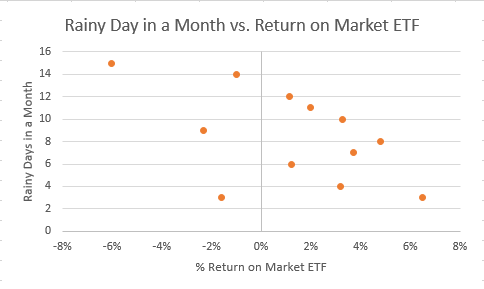 In the scatter plot pictured above, we assess the relationship between rainy days in a month and the return on a market ETF. 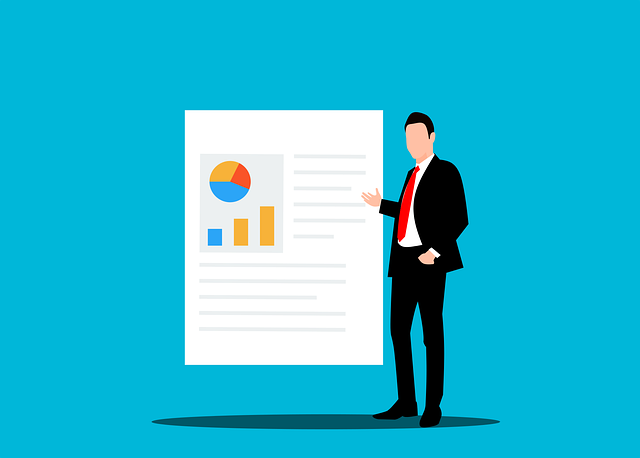 A scatter plot, or scatter chart, is generally used to assess the relationship between a pair of observations or variables. The dots on the graph are individual values, and when plotted together, a pattern is created. This pattern allows the viewer to draw conclusions based on the relationship of the variables.

These relationships can be: positive or negative, strong or weak, and linear or nonlinear. A scatter plot is also used to see the fit of the data in regression analysis.

Key takeaways of uses of a scatter plot:

As mentioned previously, the relationships of the data in a scatter plot can be: positive or negative, strong or weak, and linear or nonlinear. 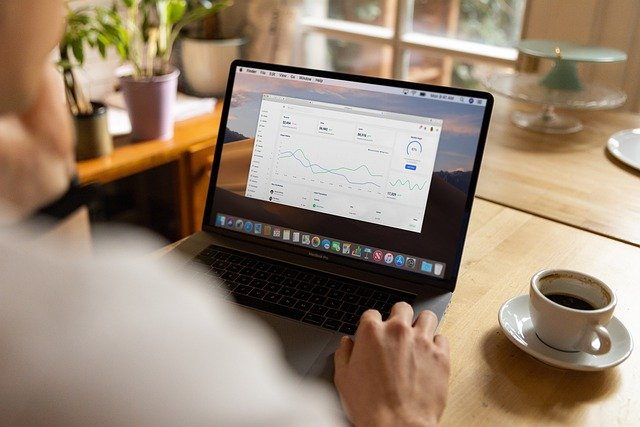 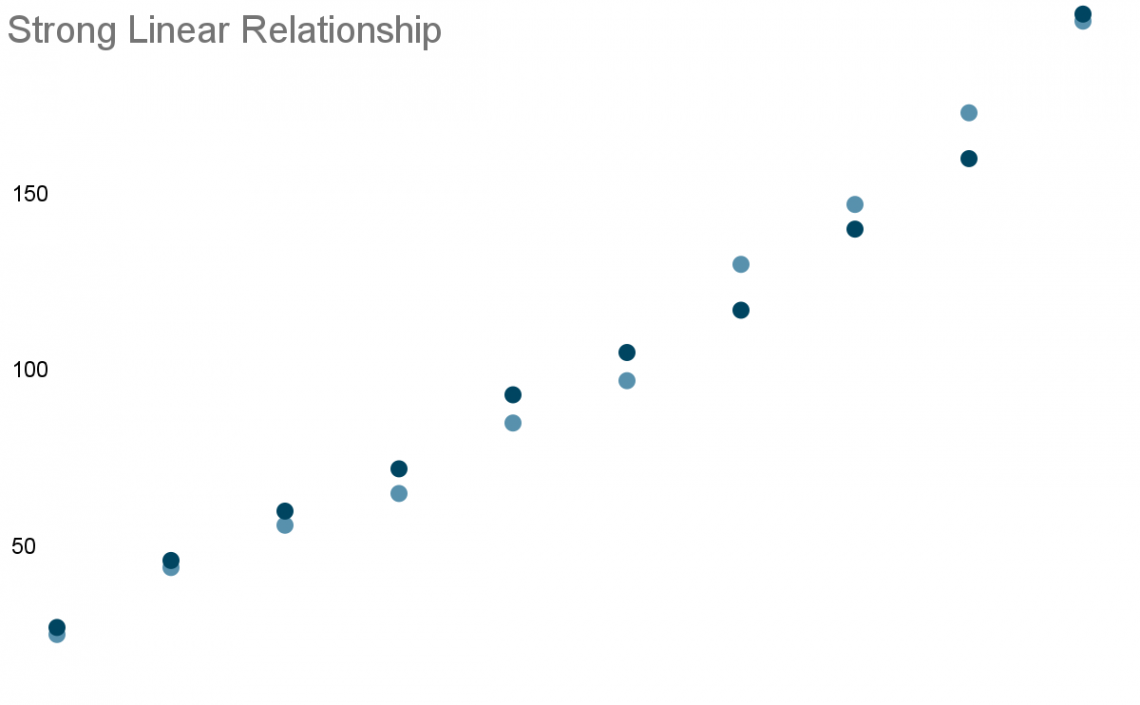 Below is an example of a scatter plot with a strong nonlinear relationship. The observations are all very close together, but they do not form a straight line. Notice how the observations peak before dropping off. 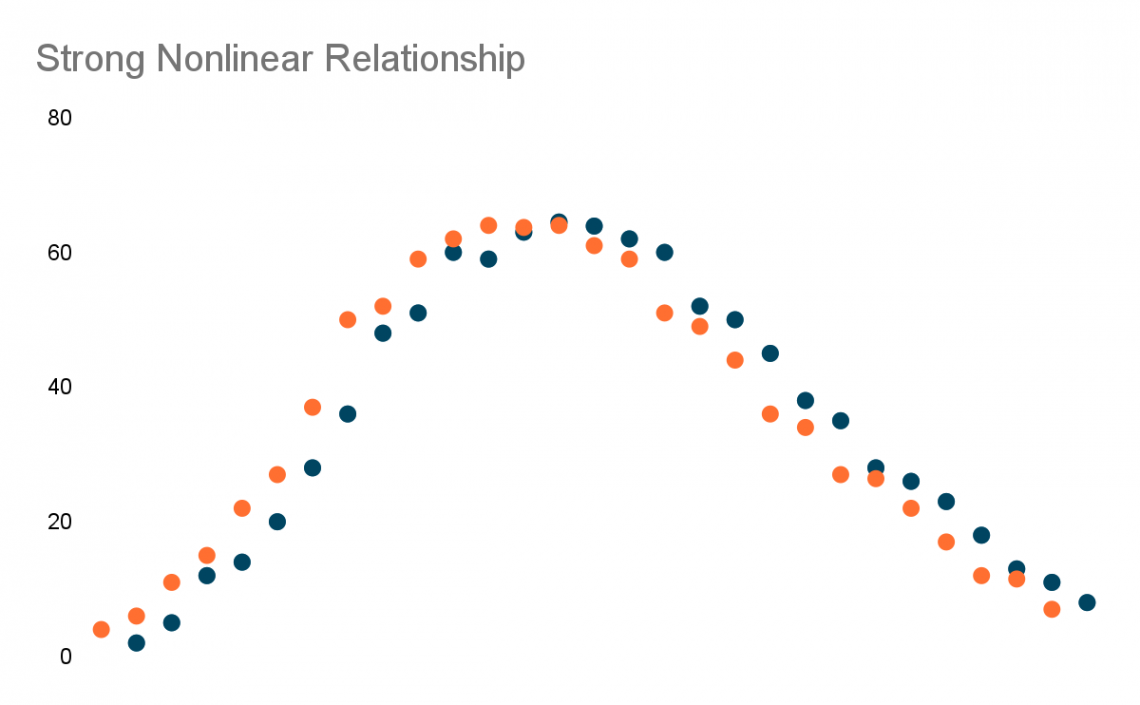 Scatter plots can provide crucial information on the relationship of the observations in a data set. Still, two issues must be considered when interpreting the scatter plot.

The two issues are: overplotting and mistaking correlation for causation.

One remedy to prevent overplotting is to take a random sample of the large data set. By randomly taking a sample of the data points, the viewer can obtain a good idea of the relationship that exists in the entire data set.

Correlation Does Not Imply Causation

One of the main issues of scatter plots isn't plotting the data itself, but its interpretation. It is a common mistake to interpret a positive or negative correlation and assume causation. But it is important to remember that correlation does not imply causation.

Correlation does not imply causation means that although there may be a relationship between two variables, changes in one variable doesn't mean the other variable will change by the same amount, if at all.

It would be incorrect to view statistics on the number of car accidents and birds in Los Angeles and assume that one causes another, even if there is a positive relationship when the data set is plotted in a scatter plot. There are undoubtedly other factors at play regarding car accidents and an increasing or decreasing bird population.

One remedy is to be aware that the change in one variable may not lead to a change in the other variable, which would mean a correlation may not actually exist between the variables. If a positive or negative relationship exists, further analysis should be conducted before reaching a conclusion. 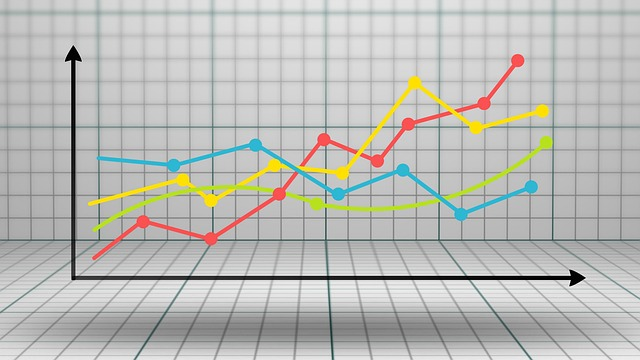 Creating A Scatter Plot In Excel

Now we will go over how to create a scatter plot in Excel.

First, we must gather data for our data series and enter or import the data into Excel. For example, below, we have data on the return on a market ETF and the number of rainy days in a given year. 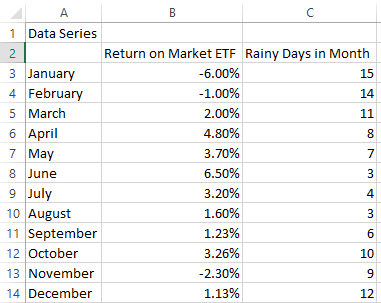 Now that we have our data in Excel, we can follow the steps below to plot the data series on a scatter chart.

One common addition to a scatter plot is a trendline for regression analysis. By adding a trendline, we can see the best fit of the data series. Best fit can tell us how strong the relationships are between observations.

To add a trendline in Excel: 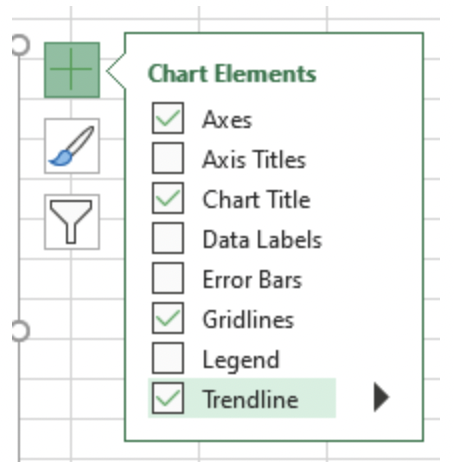 Below is the scatter plot of rainy days in a month versus the return on a market ETF, with a trendline added to it.