What Is A Collateralized Debt Obligation (CDO)?

CDO stands for Collateralized Debt Obligation and it involves the pooling of debt to reduce risk and raise returns. CDOs have been widely blamed for the 2008 financial crisis, but most people do not know what they are. When a lot of debt (such as home mortgages) is pooled together, bonds can be issued on this debt. The debt is split into different tranches, and each tranche is assigned a different payment priority and interest rate. This process is known as securitization.

When there is a lack of debt to securitize, it is possible to create a synthetic product by pooling all of the lowest tranches (highest interest payments, highest risk) to create a new product known as a CDO. The theory behind this is that even though the assets behind the bonds are risky, by pooling large amounts together it is possible to minimize risk whilst still receiving the high interest rates. The problem with CDOs is that although they are split into tranches with the top tranche being rated AAA (i.e. no risk) and the bottom tranche being rated as junk, they are all based on the same asset – the worst subprime mortgages from a large mortgage pool.

Much of the problem with CDOs in the mid 2000s was that they were assigned AAA ratings whilst being based on less-than-investment grade assets. The reasons for the rating agencies giving these CDOs top ratings were:

The theory is that mortgage default rates would need to be very high in order for the top AAA rated tranche to experience losses, but the reality was that when some of the worst subprime mortgage owners defaulted, they all defaulted. Therefore the risk on the AAA tranche was almost the same as on the junk tranche, so as soon as US housing prices stopped rising and people started defaulting, hundreds of billions of dollars of CDO's were effectively wiped out.

Trading and structuring CDOs was such huge business for the large bulge bracket banks and was responsible for such a vast portion of their profits that when the US housing economy started to slow and mortgage originators started running out of fresh loans to make, the banks had to come up with an alternative. The solution was to create synthetic CDO's which were not actually based on any mortgage or debt or anything else, they were made up of credit default swaps.

The idea here is reasonably complex and the details are not that relevant but in essence banks sold tranches of insurance (CDS) on tranches of mortgage CDOs. You could buy the top tranche of a synthetic CDO and you would be writing a credit default swap on the top tranche of another CDO which was based on actual mortgages. As long as that 'real' tranche did not default, you continued to collect the premiums on the CDS's you had written. The real problem with this extension of the CDO machine was that $1bn in mortgages no longer meant just $1bn in CDOs, it could mean $10bn, $20bn or even more. There is no reason why multiple parties cannot write different insurance contracts on the same mortgage so if Lehman Brothers structured a $1bn CDO, Goldman Sachs, Morgan Stanley, Citi and others could then go and create a synthetic CDO comprising CDS's on that original Lehman CDO. This magnified risks, interconnectivity and (perhaps most importantly) profits.

**To learn more about this concept and become a master at bonds and fixed income, you should check out our Bond Course - Fixed Income (coming soon!)** 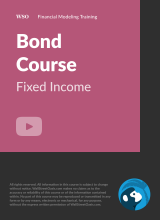