The Qualifications of an EB

After seeing people complain about what amounts to an EB today, I thought it'd be interesting to see what all of you think belong as an EB, which WSO seems to consider to be CVP, PJT, Evercore, Lazard, Moelis, PWP, and Greenhill. That being said, just some points to ponder...

1) Is the EB qualification based on exit opps? If so, I can definitely see why that list of firm is considered the list of EBs. However, even among the list, there is a very large variance of exit opps from Evercore to Greenhill.

2) If not exit opps, what makes an EB and EB? Just some points of discussion:

Honestly some pretty good points in the post, but as I understand it the primary qualification of being an EB is whether the prospects on WSO determine the bank to be an EB or not.

Considering nobody in the real world ever says "elite boutique" out loud, this is the answer.

I did hear "premier boutique" used a lot throughout the recruiting cycle by the senior folk interviewing me during SDs though.

This. I always just say "I work at a boutique" if someone asks. If you really say "elite boutique" out loud I'm internally cringing.

I wish this was the case. Have started to hear during interviews prospects use the term elite boutique. An absolutely absurd term to use in an interview.

RBC and PWP are rising EBs.

RBC, as in one of the most aggressive lenders? Not sure that's an EB, on the rise as a BB for sure though

I'm pretty sure the poster was making fun of the RBC and PWP circlejerk among prospects on WSO.

Haven't they fallen off the league tables? Where do you guys get your info from?

Use Graphs in Excel

....but both have a balance sheet / can potentially help finance a deal? RBC has a retail banking arm ffs

I thought the whole notion of what makes boutiques "elite" is the fact that they can get auto-mandated on a +$1bn txn without the ability to finance it - e.g. they're hired on big dollar-sized deals for their Big Brain services alone and pride themselves as M&A intellectual purists

Elite boutique is a term cringe betas use to justify that no one outside of finance has heard of their bank (this is coming from a guy who works at a bank like this too). As you pointed out, it's not based on anything but the sentiment of cucks at the time. The fact Moelis/ Gugg/Lazard try to act like they are holier than places like JEF is laughable

Person removed their comment, but no I do not work at Gugg, could care less about what people think of them lol

Well I mean for the purposes of recruiting they are lol

The last sentence really killed the whole cool argument you had going there.

Lazard is just better than Jefferies in almost every way. Even their name is way more prestigious (Lizard vs. A kid's toy manufacturer)

Yeah this. No one really talks about rankings and stuff the second you start working full-time. I suppose there's always those analysts who like flexing where they work now and then when they're in a group but those ones are usually generally miserable anyway.

But to be clear, the only place people really act like x bank is holier than thou than y bank is here and ib clubs on campus lol

The truth is the good shops also usually work longer (eg GS or Moelis work more than BNPP and Nomura, at least I would hope), so people there are kind of desilusioned, thinking "yeah I'm making deals but I'm also sleeping 6h a night, and that sucks".

What is stopping a big bank, say Wells Fargo (a $200 bn company), from just purchasing an EB (say for $5,10,15 bn). Why don't we see more consolidation in the space. Thanks for the write up.

It's actually quite common for large banks to purchase other investment banks (some examples that come to mind are Stifel/KBW, Jefferies/Quarterdeck, Piper/Edgeview, Stifel/TWP, Credit Suisse/DLJ, and obviously the big GFC distressed acquisitions of JPM/Bear Stearns, Barclays/Lehman, Wells/Wachovia, BofA/Merrill). The thing is these smaller banks aren't built by their name, and it's the people that make the smaller bank. During acquisitions, more often than not there will be a degree of turnover among seniors and rainmakers due to issues with integration, different strategy, compensation, and culture. A good example is that many of the rainmakers at DLJ (including Ken Moelis and his lieutenants) left just months after CS acquired DLJ for UBS due to disagreements with autonomy and strategy, and as a result, CS's acquisition of DLJ became a lot less valuable towards boosting their IB practice.

Also, from the POV of a reputable and well-established boutique bank, often it makes little sense to be acquired by a larger bank. Most of the seniors at reputable boutiques built their carers at BBs and left for the boutique life for higher compensation, increased autonomy, and less bureaucracy. It makes zero sense to go back to being at a BB unless the BB is giving them a ridiculous buyout package. For example, as I understand, a big reason why JEF has been able to so aggressively poach seniors from EBs and BBs despite its size as the largest independent bank is because Jefferies has an eat-what-you-kill comp structure much closer to EBs than BBs that's very appealing to top rainmakers and Jefferies also provides a considerable level of autonomy for seniors, which combined with the firm's strategic partnerships with balance sheets offers rainmakers at BBs and EBs a very appealing combination of EB-level comp and culture with BB-level resources and B/S.

True, hence why I think it's generally a lot more efficient (and hence a lot more common) for banks to just directly poach individual MDs, Also, I think talks of banks acquiring other banks is pretty common, it's just the vast majority of talks don't go far and fall through (ex. I heard rumours that GS approached William Blair last year to make William Blair effectively GS's MM arm, but Blair turned down the offer pretty early in talks).

You really only see BB buying boutiques when the founders are ready for an exit or when the core management has fundamentally changed (usually after the original founder retire).  I can name another half dozen examples in smaller regional markets of this happening.

No one actually working in the industry considers Greenhill to be on the level of the other EBs you listed or even Guggenheim and Jefferies. Greenhill's standing on this forum is massively inflated by prospects and SAs at Greenhill.

All the Greenhill SAs coming out of the woodwork to MS you lol. 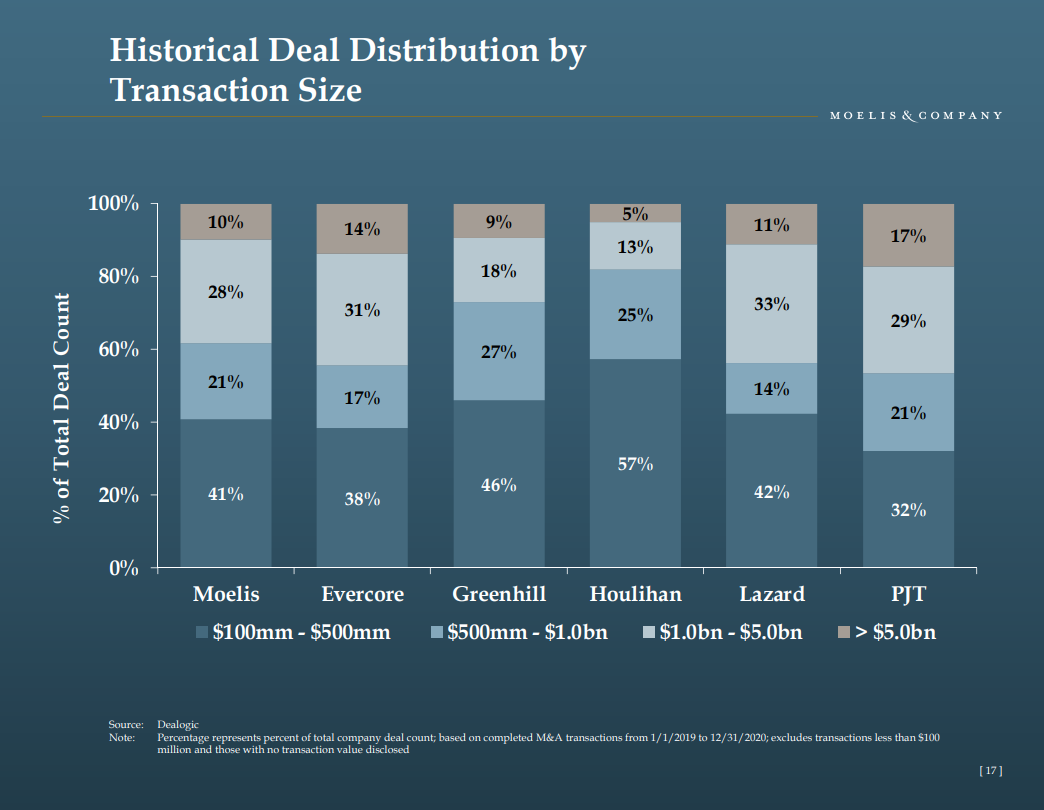 It's because of Greenhill's legacy name. Greenhill really pioneered the small private independent advisory model and was really the original CVP (lower volume than Evercore and Lazard, but was selective with what they took on and focused on headliner blue-chip transactions). However, Greenhill's fallen off quite a bit over the past decade and has both failed to capitalize on the explosion of the popularity of the independent advisory model after 2008 as well as lost out a lot of its market share and traditional blue-chip clients to the new guard of boutiques (CVP/Moelis/PJT). Robert Greenhill was a pioneer in the industry, and the Greenhill name is still a legendary name, but the firm has been a shell of its former self for quite a while now. Even during this year, with advisory activity at record highs, Greenhill was one of the few (if not the only) public firms that recorded a decrease in YTD Q2-21 advisory revenue compared to YTD Q2-20.

You raise some good questions. I'll try and tackle most of them.

Going through each bullet point under 2):

- You are correct that these firms have other divisions but everyone knows those divisions are not considered investment banking (also "Chinese wall" they don't communicate). Doesn't have any implications for how people refer to the IB divisions at those firms.

- First you looked up Lazard headcount but didn't back out the AM division. The headcount is probably around 1500 - 2000. Second, firms like Allen & Co and Qatalyst are regional boutiques. "EB" is used to refer to national/international independent advisory shops. Obviously those are great firms and meet every other "EB" qualification but the inclusion of regional boutiques in the term "EB" makes it too broad to be useful.

- This is the best question you raised, there is no right answer. Can be dependent on group. Fees are more important.

- Greenhill should probably be swapped for Guggenheim as far as "EB" status. In my opinion.

Senior bankers in the industry (within the states) really considered Lazard the only "reputable" national independent advisory shop until other prominent bankers started splitting off and starting their own non industry specific groups. Steve Schwarzman in the mid 80's, Robert Greenhill in the 90's, Roger Altman (EVR) in the early 2000's, Wasserstein Perella around that time and then Ken Moelis in 2005/6.

I think the term "Elite Boutique" is mostly just a term specific to this forum but it is useful to identify a specific set of firms that have similar comp, exits and experience.

These are some qualities I was thinking:

- Firm needs to be national/international

- Comp needs to be better than (on average) BB counterparts. I understand we are waiting to see how new comp structures will shake out.

- Average deal size probably needs to be "above MM" threshold to the average senior banker. I understand this is very vague but I would say Moelis is fine (I'm obviously not a senior banker).

Overall the term is useless outside of this forum but is helpful for identifying a group of firms. For the purposes of this forum, the term "regional EB" or "regional boutique" should be more frequently used.

Full disclosure I will be returning full time to one of CVP, PJT, EVR, LAZ, MOE, PWP next summer. I think this list is an "undisputed" list of EBs.

Agree with everything here but one thing. Qatalyst would be an industry-specific boutique. Regional boutiques are often smaller firms that focus on one region (underrated too, know quite a few MDs who pull a comfortable ~$500K+ sometimes 1-2 mil/year running a 10 person shop).

My point is that including Qatalyst and others that are 1 group boutiques, expands the EB term too far to be useful. This forum needs another term to refer to them Liontree, Raine and a couple others that are clearly "elite" firms but are focused (primarily) on 1 industry.

To be Devil's advocate, don't most of the EBs to capital Markets work and some of the EBs with the capabilities also do financing deals now? Also, Gugg seems to do a significant amount of financing work as well.

They do advisory work for capital markets deals. They don't finance them like BBs.

However once you actually work nobody cares if you're at Lazard or Evercore or CS or BAML.