Our Lending Club CDO had another good quarter without a single late payment (and no defaults, obviously). I've posted the actual results after the jump, but in a nutshell we're making a steady 11.87% and we've collected a little over $14 in interest on our initial $250 investment over the past six months.

Here's where things get interesting. Outside the WSO CDO, I actually have a good deal more invested with Lending Club, and I buy a few more notes each week. I'm pretty hands-on with the portfolio, because I know defaults can kill your NAR (Net Annual Return) pretty quickly. So during the past quarter, I had my first loan go late on a payment.

Before I go into what I did, let me explain a couple things about how Lending Club has changed over the past six months to a year. First and foremost, the number of investors has exploded. Where it used to take up to a week for a loan to get funded, it is now rare to see a loan take more than a day to be fully subscribed. You could look at this as a negative, because there's a great deal more competition for the best loans, but overall it's a good thing because the market has become much more liquid.

That liquidity has obviously spilled over into the secondary market for these loans as well. Before, you could list one of your notes for sale on the secondary market and you'd get an email six weeks later informing you that your listing had expired. That isn't the case any longer.

I had a note go into the Grace Period on me this past quarter. That means that for some reason the monthly payment wasn't made on time. I think there's a 10-day grace period before the borrower is charged a late fee, but I wasn't taking any chances.

It is my somewhat paranoid view that everyone who borrows from me is a sketchy individual looking to screw unwary investors. Now, I know that isn't even close to reality, but it's that kind of thinking that has kept me in the black year after year. So I'm gonna bail on a borrower at the first sign of trouble.

In this case, as soon as the note went into the grace period I listed it for sale on the secondary market. I'd paid $25 for the note and had received two payments totaling $1.68. At the time of the initial investment, the note was graded C-3 and was paying 13.43%. I knew it would look like the note was heading for default, so I knew I had to discount the note to get it sold.

There's actually a funny ending to that particular story. The secondary market lets you see what happens to the note you sold for at least a month after you sell it. So I got curious. It seems my borrower's note went into the grace period because he was paying it off in full. DOH! So I just cost myself a little over a buck by being too quick on the trigger finger. Still, I'd do the same thing again, and will each time it happens. I think it's better to be safe than sorry when it comes to private borrowers and non-recourse loans.

Anyway, here are the quarterly results for the WSO CDO for the second quarter of 2011: 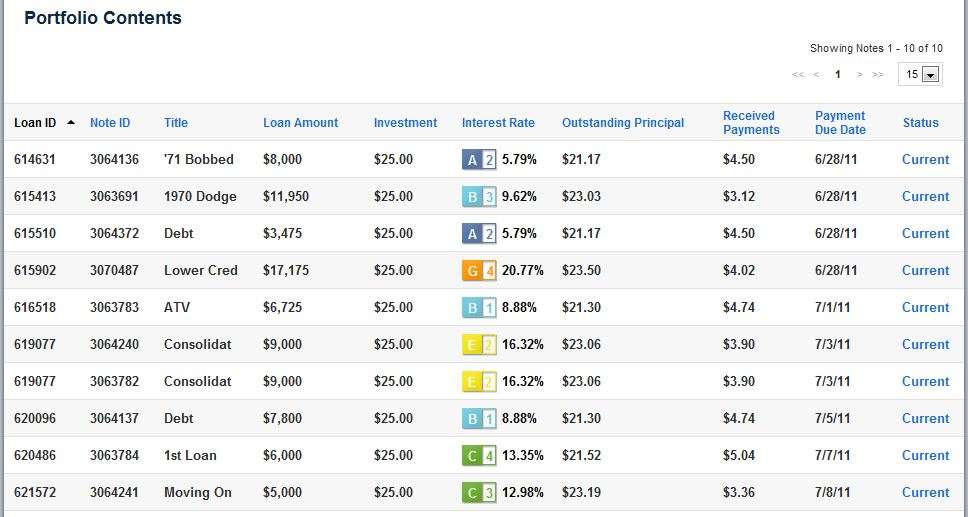 I've been contemplating taking part in this myself and would like your opinion. Please correct me if I'm wrong. I believe LC has two options: 1) You can invest X dollars and pick one of three rates of returns and 2) choose individual bonds.

I'd like to hear your opinion on what you think one should invest in either situation. In other words, if I was going to choose individual bonds and actively manage, as it seems you do, what is your opinion on how much I should invest? $5k, $30k, more, less? Or, if I was to pick one of categories of rates of returns can you invest any amount?

I hand-select the loans I fund because it allows me at least the illusion of due diligence. But you're correct, Lending Club also offers ready-made portfolios based upon your risk preference. I've never used that service, so I can't say if it's better or worse than what I'm doing, but it really all comes down to math in the end and if you buy enough notes your diversification should even out the bumps in the road.

You can invest any amount you like, and Lending Club will either structure a portfolio for you or you can select your own loans. If you're going to invest $10,000 or more PM me and I'll put you in touch with Rob Garcia (he's one of the guys in charge over there) and he'll walk you through the process and probably throw you some bonus bucks.

Otherwise, if you want to start smaller the platform is pretty self-explanatory and of course I'm here to help you out if you have any questions. I'm also happy to discuss my personal strategy if you or anyone else is interested. My portfolio outside the WSO CDO has a NAR of 13.01%, so slightly better than the portfolio above.

"It seems my borrower's note went into the grace period because he was paying it off in full."

I haven't actually looked into the Lending Club, but isn't there any way you could have contacted your borrower and spoken to him? Or do you just assume that "It is my somewhat paranoid view that everyone who borrows from me is a sketchy individual looking to screw unwary investors" and no matter what they say will not change your opinion.

You never know who the borrowers are, so there's no way to contact them. The loans are completely unsecured, so there's really not even any collections options. That's why I've got a hair trigger when it looks like someone might be going sideways on me.

Love the updates on the LC portfolio. I dabble with an account of my own but after picking my initial loans, I've kind of left it untouched and haven't committed any new $$. I can definitely attest to the loans filling faster than before though. No defaults for me yet either!

what prevents someone from robbing you and then making a new account and going again?

shorttheworld:
what prevents someone from robbing you and then making a new account and going again?

Eddie - quick question. first thx for the update, i had briefly heard of the service @ the site's inception but obtained an account shortly after you provided more extensive exposure on WSO, so thx.

Have you had any issue with your LC portfolio being recognized as assets by your advisors (tax, financial, other) or for any other personal asset valuation purposes (line of credit etc)? I've heard rumors there are some kind of issues like this popping up.

There's absolutely nothing to stop someone from doing that, provided they had the credit score to support their application. Once you default on an LC loan, though, I'm sure your SSN is blacklisted so you could only do it once. But you're right, it's certainly one of the risks and I'm ever mindful of that.

Haven't heard of that being a problem, but I'm really beyond the point of needing my assets recognized by anyone. I can see where potential creditors might have an issue with your LC portfolio because it isn't liquid (the money is tied up for the period you've lent it out) so yeah, that might be a problem if you're wanting to list it as potential collateral. Like I said, though, I haven't personally run into the issue because I'm 100% cash and don't use debt.

thx Have you used their secondary trading platform at all and what kind of bids (as a % of par) have you seen? as an aside i'd expect bid offer to be pretty wide for now and probably hard to print big trades in many off-the run type / smaller size / less popular loans on the site.

Having car issues and am thinking of saying fuck it and getting a nice car. Anyone have personal experience in making bad financial decisions?
+145OFFby Arroz con Pollo
Are the "classic" books worth reading?
+113OFFby Fast and Fiduciary
Ranking the Shape of States in the USA by Prestige
+97OFFby Amicable Chungus
Turned down a spot on Forbes list, may turn down my girlfriend next
+72OFFby ADTIBE
Another year has come and gone. Who were your most listened to artists on Spotify?
+55OFFby Arroz con Pollo
Have you ever turned down more responsibility for personal reasons?
+49OFFby Isaiah_53_5 💎🙌💎🙌💎
The growing jealousy towards Tech on WSO is getting ridiculous
+46OFFby IncomingIBDreject
RIP Liver King
+33OFFby Isaiah_53_5 💎🙌💎🙌💎
Using AI to generate stock pitches and other finance stuff
+31OFFby matt19215
Recovering from Adrenal Fatigue?
+28OFFby Gucci Loafers
END_OF_DOCUMENT_TOKEN_TO_BE_REPLACED