All statistics featured in the reports are based on 4,750+ user submissions from professionals in the private equity industry. The report includes data from YTD 2017, with approximately 70% of the submissions coming from the United States. This dataset is growing fast, and is the most robust available.

Main categories are analyzed below with an emphasis on most relevant employers and key points of interest.

Notably, none of the companies in the top three for first-year analyst, first-year associate or vice president made the top three in the other positions. While not all nine companies listed above reported compensation figures for each job level, several did and were clearly higher in one job category.

Out of 38 private equity firms, employees at Apollo Global Management, Carlyle Group and The Riverside Company were most satisfied with their pay compared to similar jobs elsewhere.

The above compensation figures trend somewhat higher than other industries such as consulting where starting salary is around $80,000 base and rises to $320,000 at the director level. This is not surprising since the majority of private equity firms still don't hire directly out of undergrad (see list of firms that do here). At a large technology company like Facebook or Uber, software engineers start around $75,000 but are capped at $271,000 as directors.

The exponential increase in comp from analyst to VP. Data up until November 2017.

Key Observation 2: Bain Capital is in the top three firms for both hardest and best interview process.

Member submissions also provided information on the interview process, including the hardest and best experiences. To compile the statistics, each company is given an adjusted score using Bayesian estimates, which takes into account the number of reviews for a particular company with a minimum of two required. The results are representative of 69 firms. 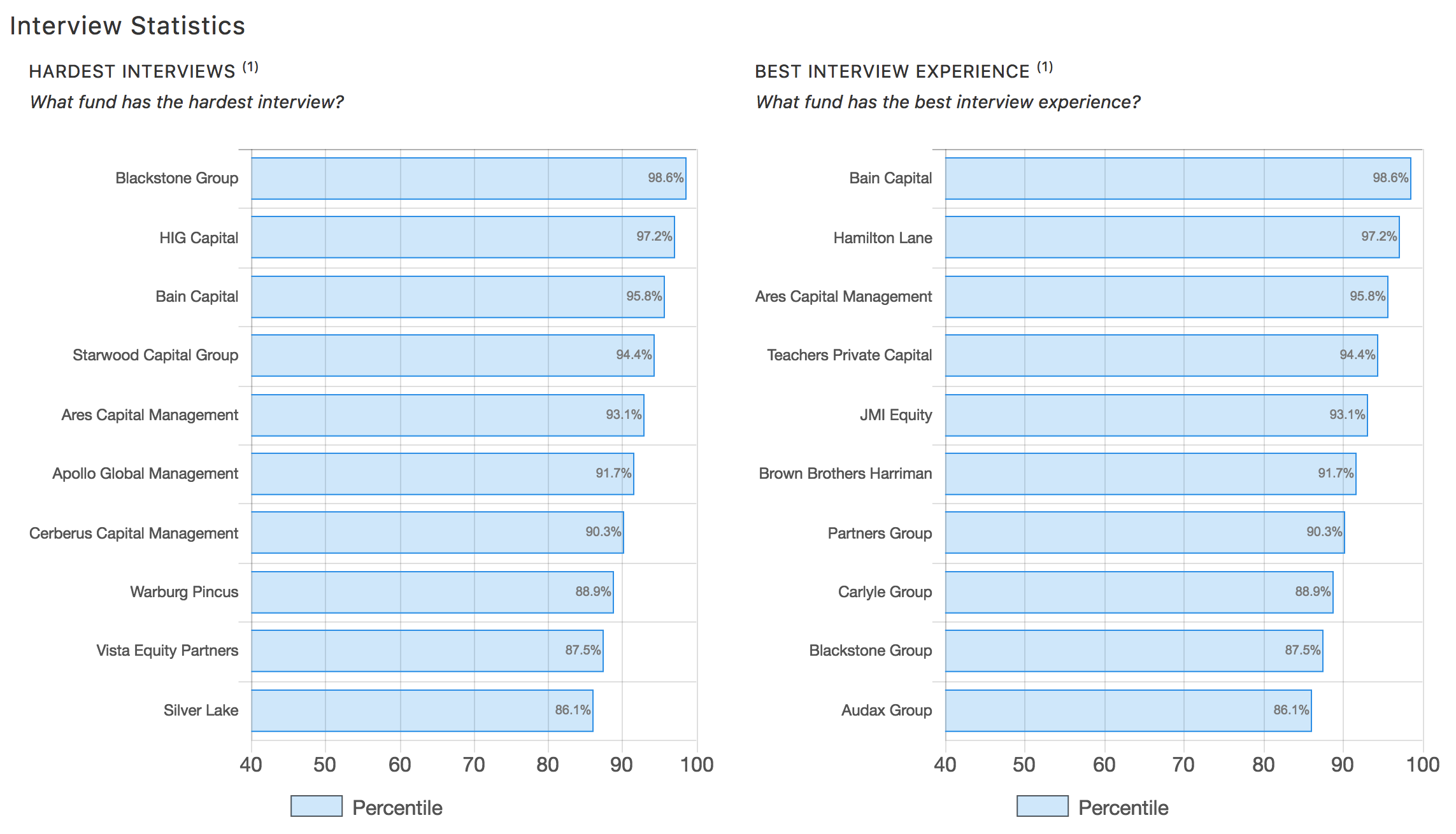 Hardest and best interview experiences across hedge funds. Data up until November 2017.

The professional growth and career opportunities section of the 2017 Private Equity Industry Report focuses on three sub-categories. We've highlighted the top 3 out of 38 firms in each sub-category.

There are clear leaders in the professional growth category, with three companies taking all but one top-three ranking. In addition, both Apollo Global Management and Carlyle Group show a correlation between professional growth and highest average compensation.

Member submissions also highlight opinions on promotions and fairness within the Private Equity Industry. Again, we've highlighted the top firms in each sub-category.

A clear trend is apparent with three private equity firms taking top-three rankings in all sub-categories. These results also correspond closely with those found in the professional growth and development category.

An important measure of a company is what employees say about their workplace outside of work. In this report, reputation is defined by two factors, employee pride and whether employees would recommend the company to others.

The Riverside Company, Carlyle Group and Fortress Investment Group round out the top three for their firms being "recommended" to others by their employees. 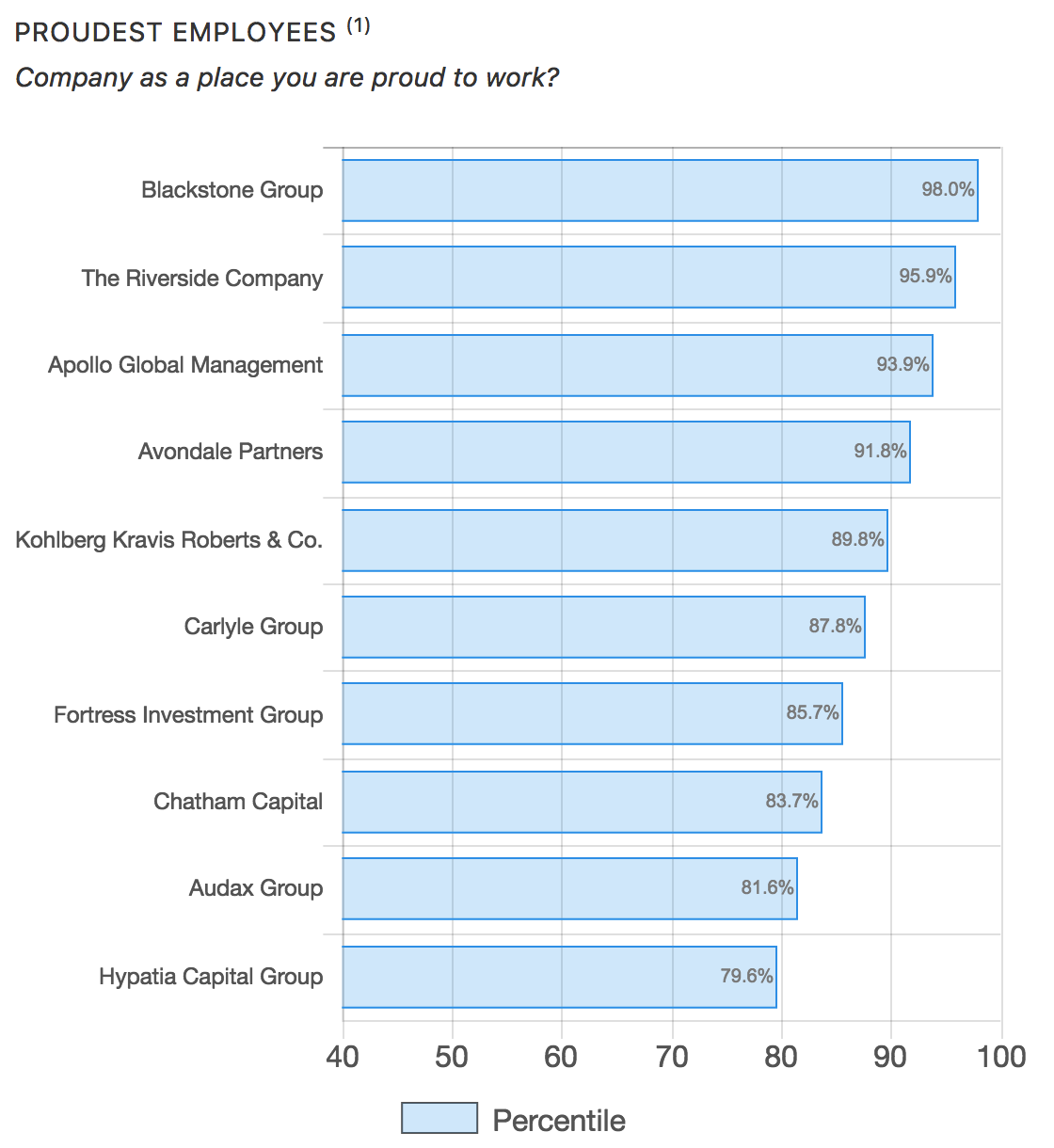 The proudest employees at various hedge funds, a potential proxy for reputation. Data up until November 2017.

Key Observation 6: There is a strong correlation between senior management rankings and the firm's performance in other categories.

The senior management statistics were generated from the following four sub-categories. We've highlighted the top three out of 38 firms in each sub-category.

The data suggests a strong correlation between opinions about senior management and the company's performance in all other categories, including top compensation for Apollo Global Management and the Carlyle Group, throughout the 2017 Private Equity Industry Report.

Key Observation 7: 3 of the 4 top ranked lifestyle firms don't rank in the top 30 for most average hours worked.

The 2017 Private Equity Industry Report also includes feedback on which firms provide the most satisfying lifestyle as defined by three sub-categories. The top firms in each sub-category are listed below.

Not surprisingly, the top three out of 43 firms in the two "positive" lifestyle categories are top performers throughout the report and do not rank in the top three for most average hours worked.

In comparison, The Riverside Company, Carlyle Group and Fortress Investment Group do not rank in the top 30 while Apollo Global Management ranks 11th at 73 hours per week.

Private equity industry employees working the most average hours still average 6-8 hours less per week than their counterparts in the investment banking industry. 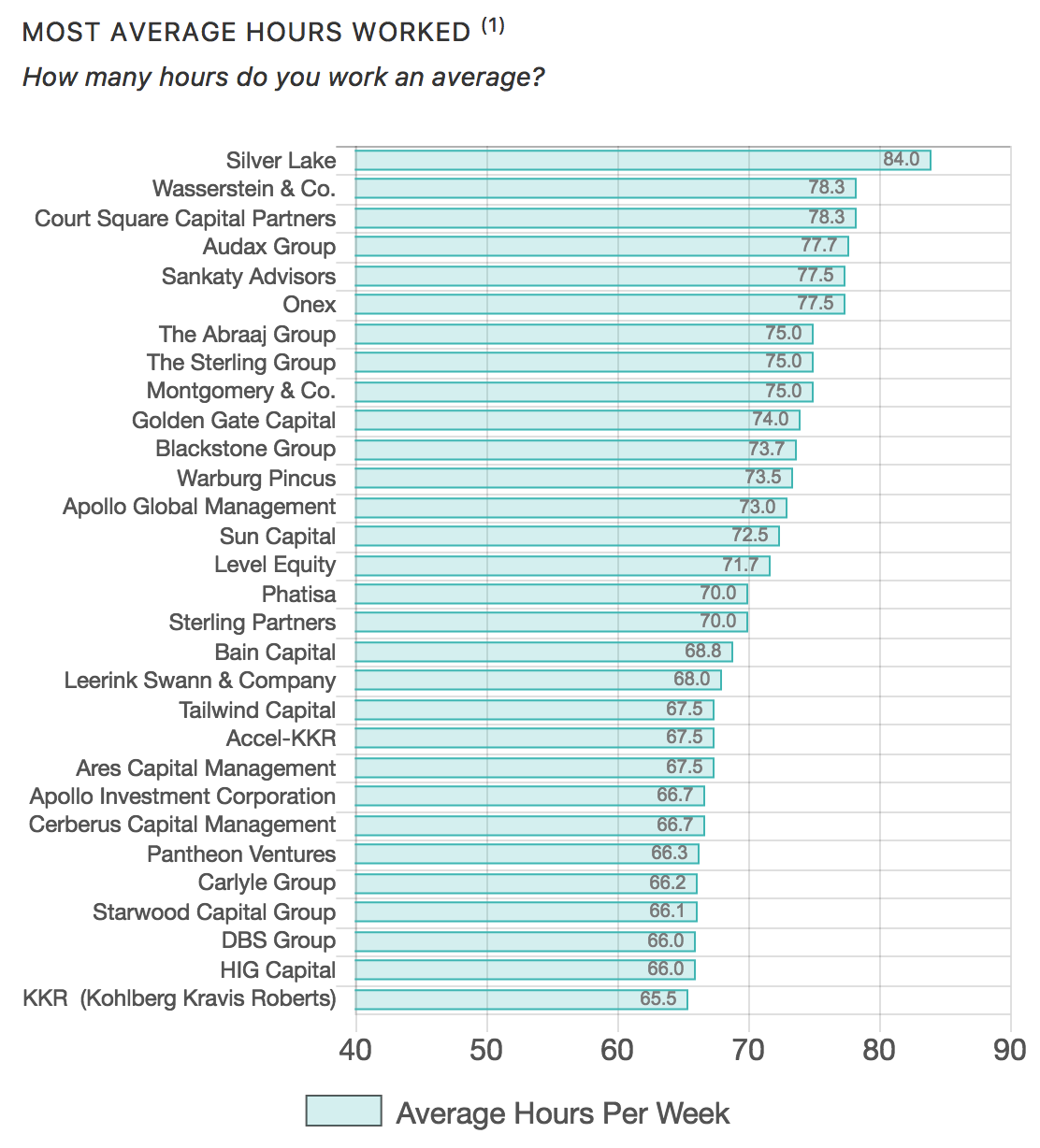 The hours worked per week, ranked highest to lowest. Important to note that some of these data points have low sample size (smaller HFs) Data up until November 2017.

Key Observation 8: Graduates of schools in major markets are most represented in the study.

In addition to the main categories discussed throughout this article, there are several other points of interest within the 2017 Hedge Fund Industry Report.

The 2017 Private Equity Industry Report provides key insights into the industry as well as important information for when analyzing your current employment or determining priorities in your job search.

For more information, including the most current data as reports are continually updated online, please contact Wall Street Oasis at [email protected].

Graphics Disclosure: Background vector created by Brgfx - Freepik.com // Designs by Freepik // Icons made by Freepik from www.flaticon.com is licensed by CC 3.0 BY // Edited by Ajay Patel

Love these reports, both interesting and useful!

Thanks, they were a lot of work... Some interesting new articles and stats coming up these next few weeks, stay tuned!

Otherwise, it's a very insightful report.

Interesting report. Thanks for the info. I wasn't expecting the hardest interviews to be associated with the best interviews such as the case with Bain.

Thanks for the hard work putting this report together. I notice the italic text under several of the charts refers to "hedge funds" not "PE firms" -- are we using these words interchangeably / is that common?