EBITDA (Earnings Before Interest, Taxes, Depreciation and Amortization) measures a company's operating performance. It provides information on a company's earnings before netting out non cash expenses like depreciation of a firm's assets and non operating expenses like payments of interest and taxes. For this exact reason, it may not give a reliable estimate of a company's profitability.

EBITDA, although not supported under GAAP or IFRS, can provide an apples-to-apples comparison between companies within the same industry because it eliminates the effects of depreciation, interest expense, and taxes - which often varies from company to company.

EBITDA stands for Earnings Before Interest, Taxes, Depreciation and Amortization.

EBITDA is calculated by taking the company's net income and then adding back any interest expense, taxes, depreciation, and amortization.

An easy way to remember this is to add back all of the items in the acronym, which are particularly useful when calculating EBIT or EBT. The starting point for EBITDA can be either operating income, which is gross revenue minus operating expenses, or net income, which is the last line item on the income statement.

The reason for adding interest expense, taxes, and depreciation and amortization back to net income is as follows:

In calculating EBITDA, interest is added to net income because all companies have different capital structures (companies are financed differently), which leads to varying interest expense amounts (payment to holders of a company's debt). Interest expense is also tax deductible.

Depreciation and amortization are added back to net income because the amount of depreciation on a tangible asset, such as a company car, and the amount of amortization on an intangible asset, such as a patent, will vary based on the asset and the assumptions used. For instance, one company may have a building that is being depreciated, while another may only have one company car. The reported depreciation amounts will be very different.

EBITDA is commonly used in:

Discounted cash flow (DCF) analysis and when comparing the relative value of companies because it provides an apples-to-apples comparison between companies by eliminating the effects of interest expenses, taxes, and depreciation and amortization.

The valuation of companies with negative net income that have a positive EBITDA.

When used in relative value comparisons, a common multiple that is used is enterprise value to EBITDA, commonly known as EV/ EBITDA.

Enterprise value (EV) is equal to the market value of a company's debt and equity minus cash and cash equivalents.

Below is the formula for enterprise value to EBITDA.

Oftentimes, companies will have different capital structures and negative net income. This can create issues in valuations and company comparisons.

Discounting negative cash flows will likely lead to a poor valuation for a high growth company. For example, Spotify Technology SA, a music and podcast streaming platform, posted a negative net income of $208.2 million as of December 2019, but a positive EBITDA of $36.94 million in the same period.

EBITDA, especially when used in an enterprise value multiple, provides an apples-to-apples comparison between companies within the same industry because it eliminates the effects of depreciation, interest expense, and taxes.

EBITDA, when combined with other financial metrics, can provide valuable multiples.

Two of these multiples are:

A leveraged buyout (LBO) is when a company, usually a private equity (PE) firm, acquires another using a large amount of leverage (debt) to finance the purchase. The company being acquired is usually referred to as the target company, and the company purchasing the target company is called the acquirer.

Let's imagine a potential target company that is currently revolutionizing kitchen appliances has a negative net income of $100 million. An acquirer believes that under new guidance, the target company could start to turn a profit. The acquirer calculates EBITDA to be $30 million. This is the amount the target generates from selling kitchen appliances before paying for interest expenses, taxes, and depreciation.

The acquirer now calculates the target's enterprise value (EV) to be $40 million. Using an enterprise multiple (EV / EBITDA), the acquirer calculates a multiple of 1.33x. This means that the acquirer will need to pay 1.33 times over EBITDA to acquire the target company. This metric can now be compared across other such companies to analyze if it is under, fairly or over-paying for the transaction.

The Drawbacks Of EBITDA

Although EBITDA provides useful information for valuation and relative comparisons, it does have its limitations.

In summary, while EBITDA can be a good way to measure the financial health of a company, there are some drawbacks to be aware of.

EBITDA Vs. EBIT Vs. EBT

EBITDA stands for Earnings Before Interest, Taxes, Depreciation and Amortization. EBIT and EBT are both components of EBITDA, but they focus on measuring different aspects of a company's operating income.

Below is the formula for EBIT:

If we refer back to our example using a rental car company, EBIT would be a better metric to use since it accounts for the depreciation of the fleet of cars, which would likely be substantial.

Below is the formula for EBT:

EBT would be useful if an analyst is looking at a company with a highly leveraged capital structure, and has a lot of fixed assets or intangible assets, such as patents, that require a significant amount of depreciation or amortization expenses. It would allow the analyst to view the company's operating income prior to accounting for taxes, which will vary depending on where the company does business. 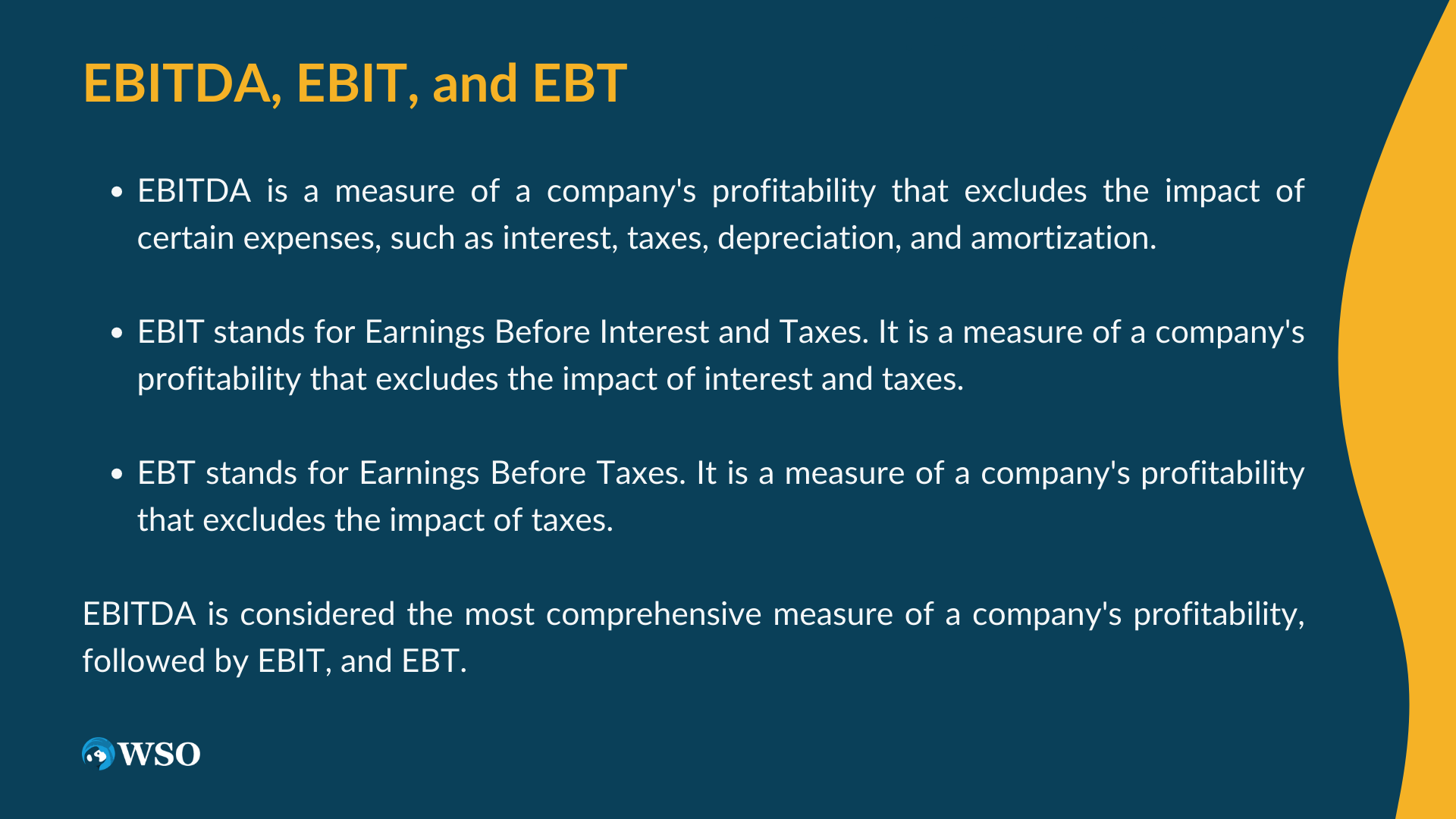 What Is A Good EBITDA?

EBITDA provides information on a company's earnings prior to netting out depreciation of a firm's assets and payments of interest and taxes. A higher EBITDA is preferred over a lower one, but if a company is highly levered, then EBIT or EBT might be a better measure for a company's profitability.

Let's assume a new high growth online car manufacturer has net income of $5 million in the current period. An analyst would like to calculate EBITDA for this company and simultaneously calculate its EV to EBITDA ratio. It currently has an enterprise value (EV) of $20 million. In order to calculate the company's EBITDA, the analyst would need to add back interest expense, taxes paid, and any depreciation and amortization to net income.

All amounts below are in US Dollars (USD).

If you recall, EBITDA is equal to:

So in this case, the formula would be:

Now to calculate EV to EBITDA we will divide the company's EV of $20 million by EBITDA of $6.7 million, which we calculated above.

The formula for EV to EBITDA is below:

EV to EBITDA for the online car manufacturer is equal to:

An EV to EBITDA of 2.99x means that an acquirer would need to pay 2.99 times over EBITDA to purchase the online car manufacturer. When evaluating the attractiveness of a company, it is important to consider other multiples and metrics of the target company, and compare these multiples with companies in the same industry.

Let's also calculate the company's EV to EBIT and EV to EBT to see what impact depreciation and taxes have on EBITDA.

EBIT for the company is equal to $6.4 million. The calculation is below.

EV to EBIT for the online car manufacturer is equal to:

Since depreciation and amortization is removed from the EBIT calculation, the denominator in EV to EBIT becomes smaller. The company has an EV to EBIT of 3.13x, which means an acquirer would need to pay 3.13 times over EBIT to acquire the online car manufacturer.

EBT for the company is equal to $5.4 million. The calculation is below.

EV to EBT for the online car manufacturer is equal to:

Since EBT nets out interest expense and depreciation and amortization, the denominator for EV to EBT decreases, bringing the multiple to 3.7x.

As variables, such as interest expense and depreciation, are removed from EBITDA, we can see the impact they make on our multiples.