A simplified aid that illustrates how money flows throughout the economy.

The circular flow model of the economy is a simplified aid that illustrates how money flows throughout the economy, or in an economic sense, the redistribution of income between the decision-makers for resources and production. 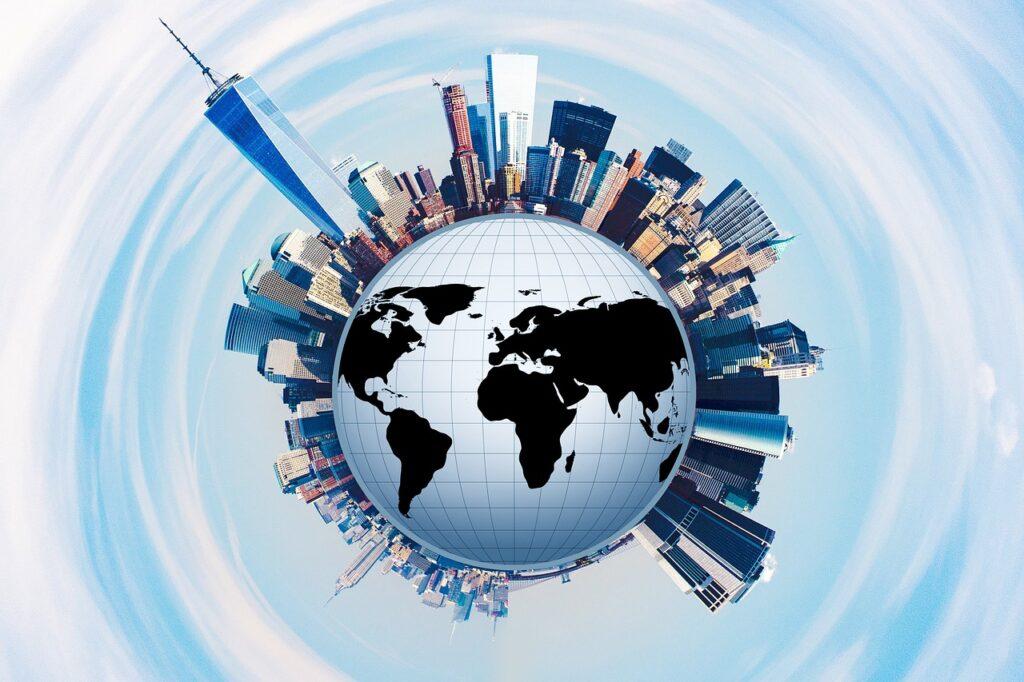 It helps in the calculation of national income and is one of the key indicators in macroeconomics. It was conceptualized back in the 1730s by the economist Richard Cantillion, and it was visualized by François Quesnay.

The model was then improvised with the practical applicability in terms of the flow of money that Karl Marx construed.

Furthermore, a significant improvement was made in 1933 by John Maynard Keynes and his assistant, which further developed the concept for the United Nations that is the current model used now. 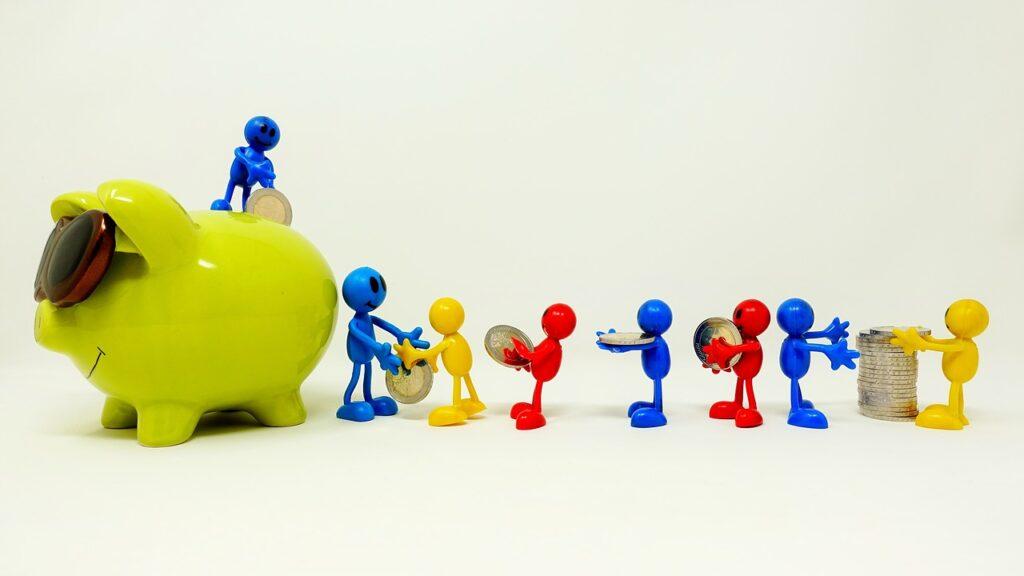 1. Households: They own all the resources in the economy and are comprised of individuals/consumers.

2. Firms: Production Units/Businesses that produce goods and services by utilizing factors of production.

3. Government: Utilizes the resources in the economy to provide public goods and services and regulate the functioning of the economy.

4. Foreign sector: In an open economy, it indicates the imports, exports, and foreign exchange with the rest of the world.

5. Financial sector: Indicates the savings and investments in an economy through banking and other financial institutions. 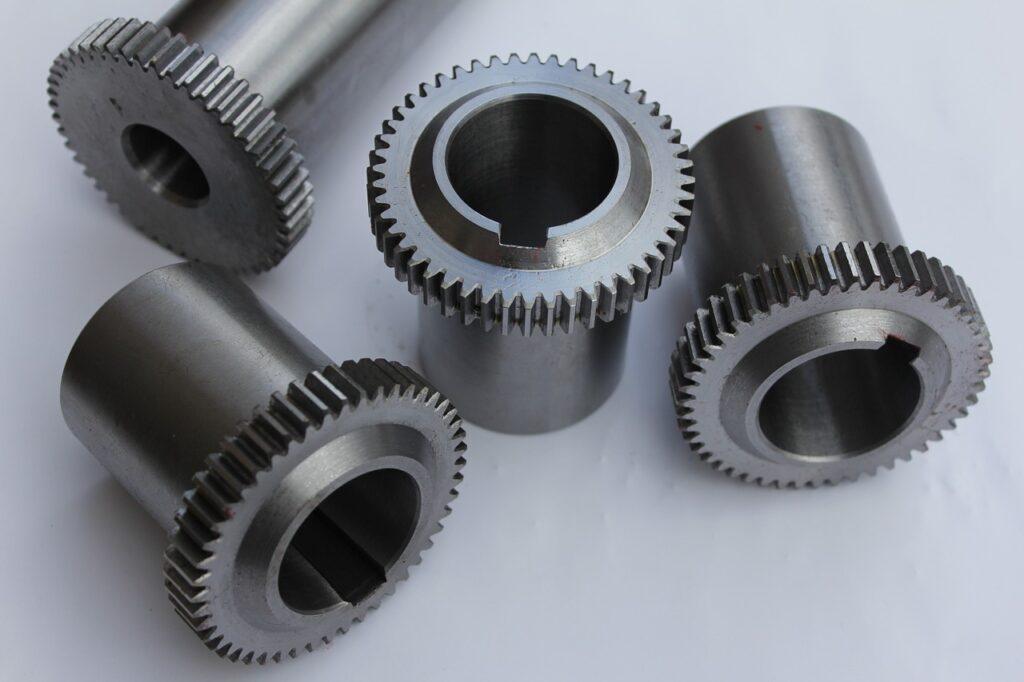 1. Land: Involves the natural resources that are essential for production in some way or the other for any business.

2. Labor: Involves the workers that are paid varied wages according to their skills and contribution.

4. Entrepreneurship: Human resources that can combine the other factors, initial investments, initiatives, etc., to start/grow a business.

Injections & Leakages are the notions that explain the flow of funds in and out of an economy:

1. Injections: Funds injected into the economy, such as investments, government spending, and money attained through exports.

2. Leakages: Funds flowing out of the economy in the form of household savings, taxes paid by the households & the businesses to the government, and money expended on imports. 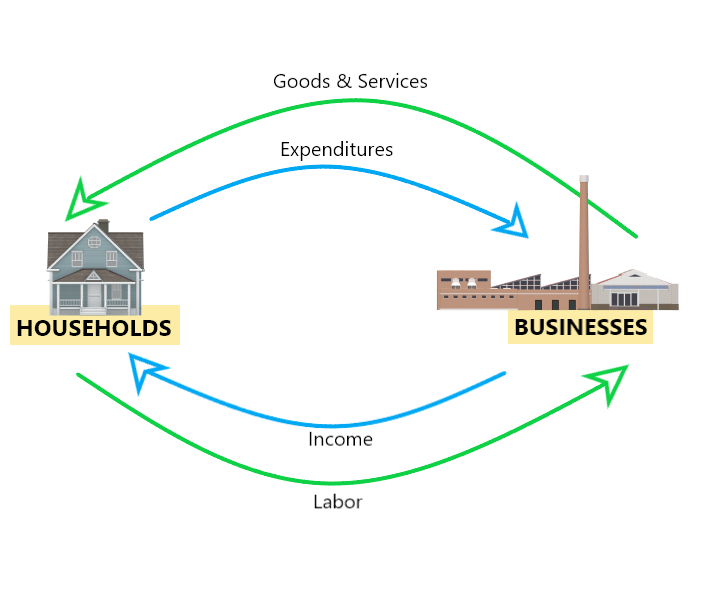 The firms make payments for the factors of production (listed as labor in the green arrow above) in the form of wages, rent, interest, and profit (income for household reflected in the blue arrow in Figure 1) to the household sector.

The money flows from the household (as an expenditure to the household) to the businesses and back when the households purchase the goods & services (reflected by the green arrow in Figure 1) provided by the firms. The flow of money differs in volume as per the economic cycles.

The two-sector model assumes that there is no government involvement, so there are no taxes or public services & goods provided. Also, foreign trade is excluded as this is a closed economic model.

The above model is an uncomplicated representation of the circular flow of money between two sectors, but in reality, the premise that 100% of the income is saved by the household or that 100% is spent on purchasing goods & services is not accurate.

If the financial sector was to be included in this model; that would have savings & investments, below would be the calculation for the two-sector model from the expenditure method: 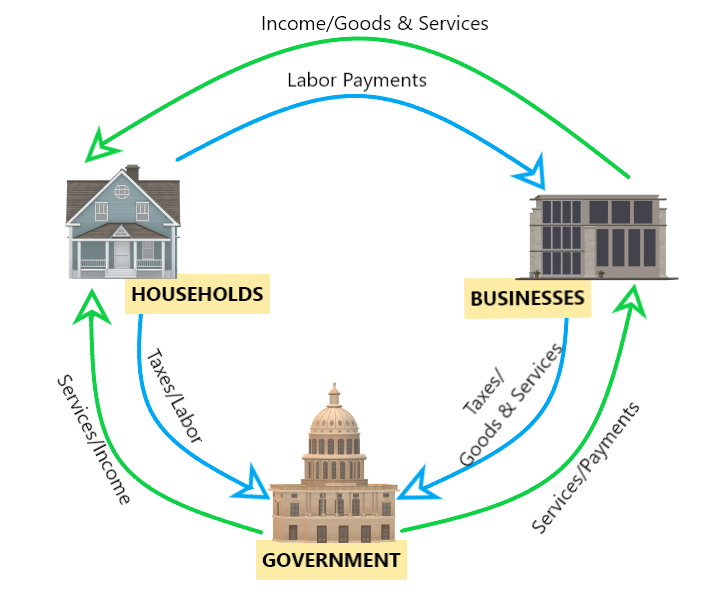 The three-sector model involves flow between the household, business firm, and government sectors. The factors of production: land, labor, capital, and entrepreneurship are provided by the household sector to both the business firms and the government.

This model follows the closed economic model just like the two-sector model, but the government plays a significant role in an economy in numerous ways.

If the financial sector was involved, which would have savings and investments, below would be the calculation for the three-sector model from the expenditure method:

The government budget should be balanced for the above to be equal; if G > T, there would be a deficit. 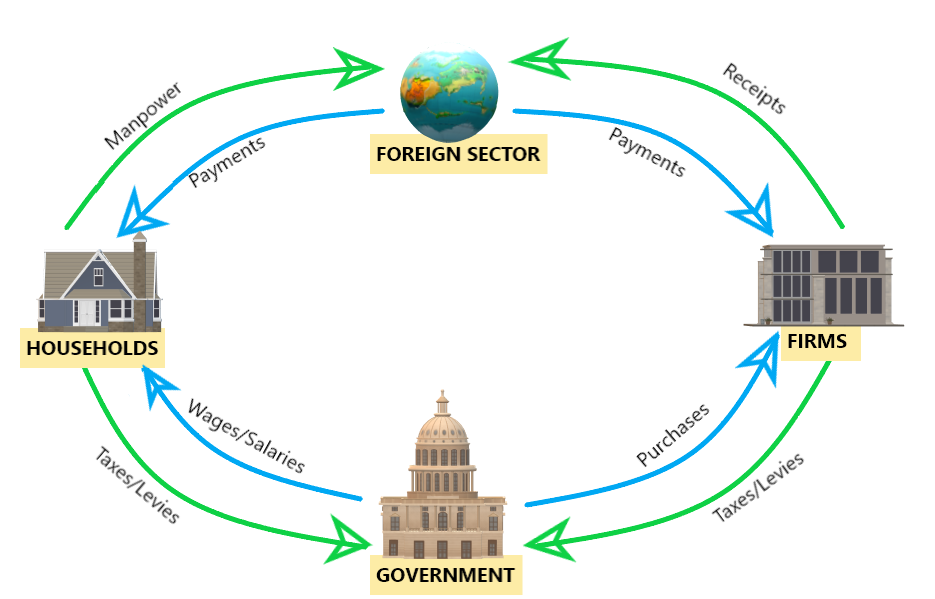 The interchanges between the household, business firm, and government sectors remain the same if a foreign sector is added to the model. The foreign sector is also referred to as the overseas or external sector. The four-sector model depicts an open economy.

It shows the trade between the economy and the rest of the world. There is an import and export of goods & services, as well as foreign exchange as inflow & outflow of capital, occur for the same.

Payments are received by the respective sectors in exchange for goods, resources, and services. Involvement of the foreign sector also involves foreign investments.

Since it is an open-economic model, net exports are included.

If the financial sector was involved, which would have savings and investments, below would be the calculation for the four sector model from the expenditure method:

From equations (i) & (ii), the below outcome is achieved as the National Income can either be consumed, saved, or paid as taxes: 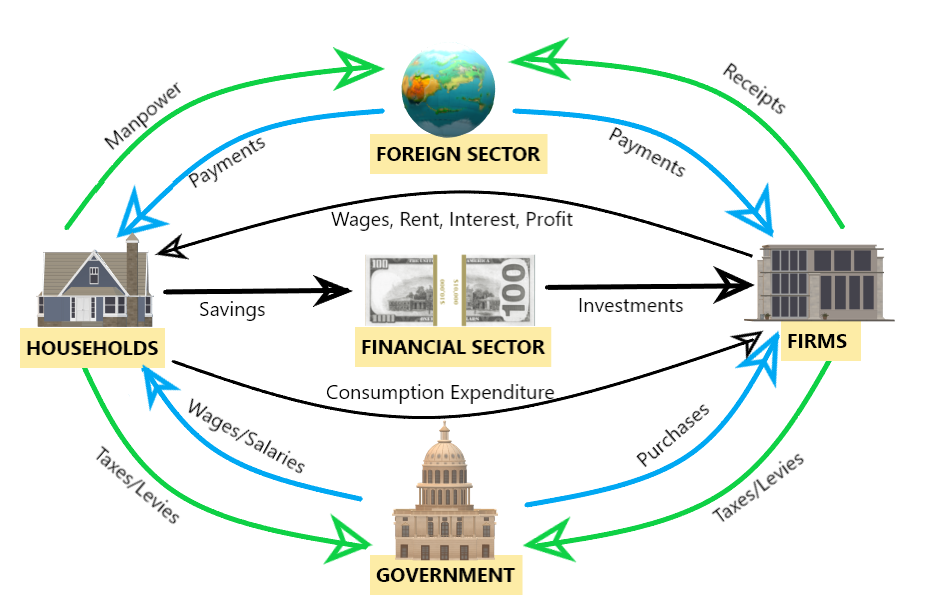 The addition of the financial sector displays a much more realistic image of the economy than the assumptions of 100% savings and 100% payment for goods & services in the previous models.

Calculation of the national income from the five sector model:

When leakages are equal to injections, then there would be a state of equilibrium:

When leakages are not equal to injections, then there would be a state of disequilibrium:

Disequilibrium can occur in the following instances:

Additional methods for the calculation of National Income

Some other methods of calculation of National Income are as follows:

The value of immediate consumption is deducted from the value of output to calculate GDP at market price from the primary (raw materials), secondary (manufacturing), and tertiary (trade and services to support secondary sector) sectors of an economy. And national income is calculated based on the factor cost of the national domestic product. 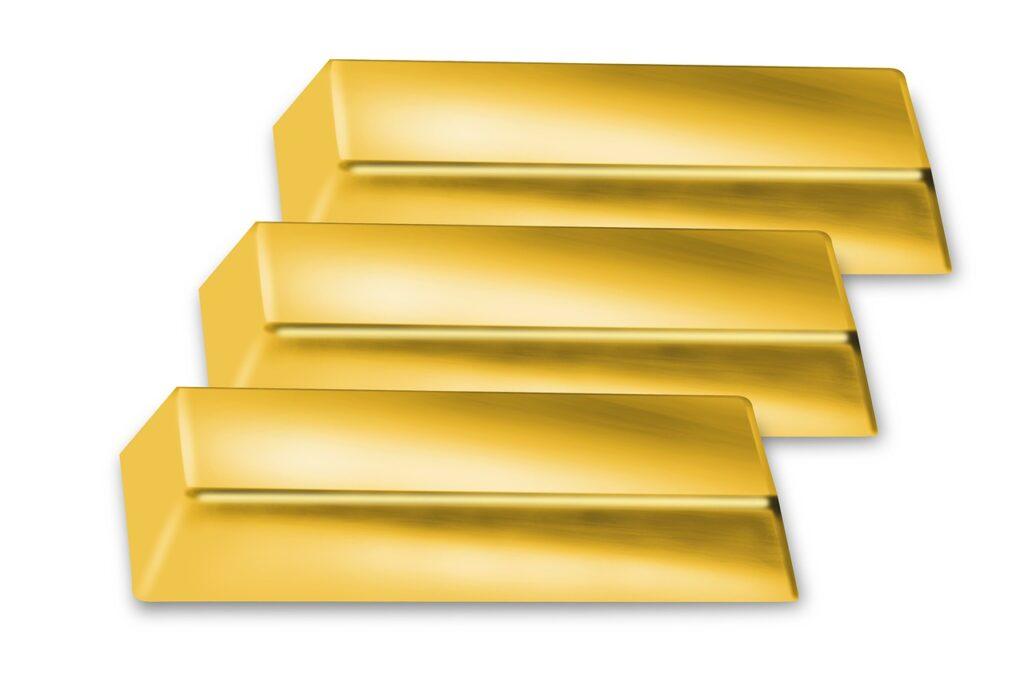 It includes the income from all the factors of production and income earned by self-employed professionals, but it doesn't include the sale of second-hand goods, prize money, transfer payments, etc. 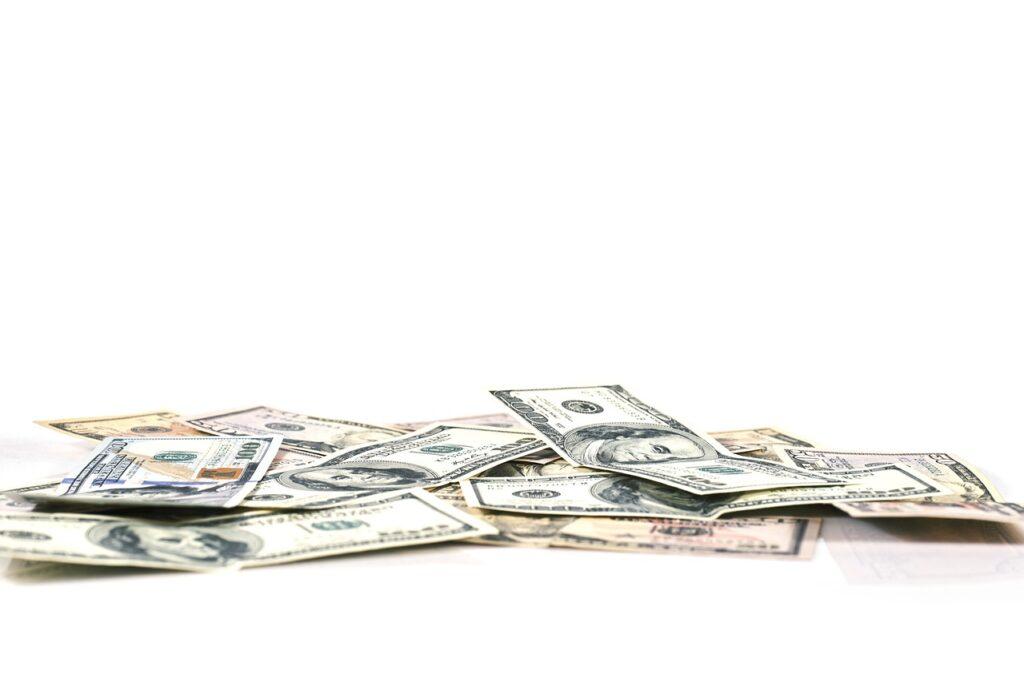 Purpose of the circular flow model in an economy