In economics, expansion is an upward trend in the business cycle marked by a growth in production and employment. It leads to an increase in income and spending of consumers and businesses. 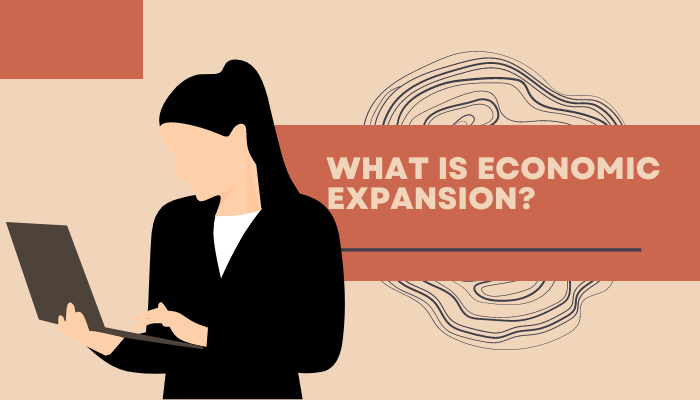 Although not all people and businesses see income improvements as a result of expansion, their increased confidence in the future encourages them to make larger purchases and investments.

When real gross domestic product rises from a trough to a peak over two or more quarters, it is said to be expanding.

When the economy is stimulated, there is an increase in employment, followed by consumer confidence and discretionary expenditure. Economic recovery is another name for this phase. 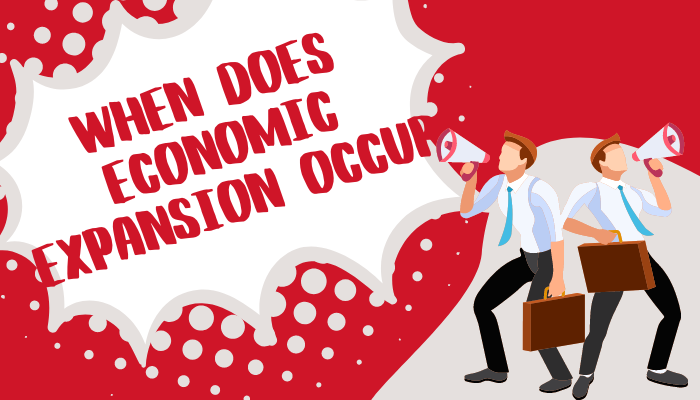 Increases in output during an economic expansion result from increased consumer and industry purchases of durable goods, machinery, and equipment. The demand for goods and services is fueled by consumer and business confidence.

Businesses add to their inventories as demand develops to uphold new purchase orders. Beyond the rise in actual sales, the choice to expand inventory often has an extra impact on production volume.

Economic expansion is part of a four-phase process known as the business cycle, which includes expansion, peak, contraction, and trough. 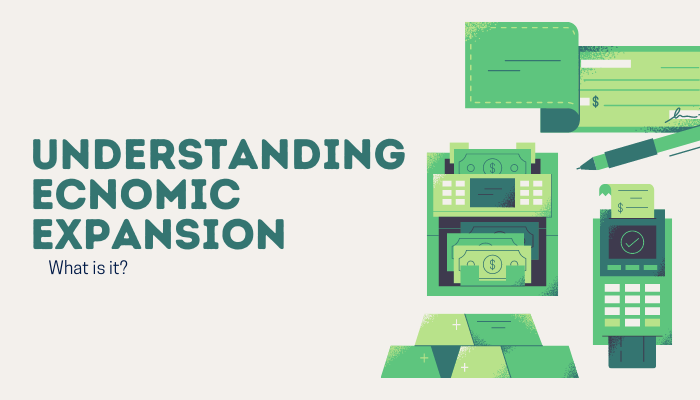 The economy is said to be thriving during an expansion. Low-interest rates, which make borrowing money cheap, high economic activity, and substantial discretionary expenditure are all characteristics of a thriving economy.

Due to a huge number of work opportunities, GDP increases, disposable income per capita increases, and unemployment rates decrease.

When expansion achieves its culmination, it reaches a peak. When there is a high amount of demand for things, inflation rises, and prices begin to rise. Consumers gradually reduce their purchases, and macroeconomic indices begin to decline.

Economic growth begins to slow and contract after reaching its peak. Companies are not obtaining as much income to sustain or grow operations due to a lack of cash flow across the economy as a result of higher costs of goods.

To save costs and protect their balance sheets, they frequently halt the hiring process and start laying off employees. At this stage, the business cycle contracts. 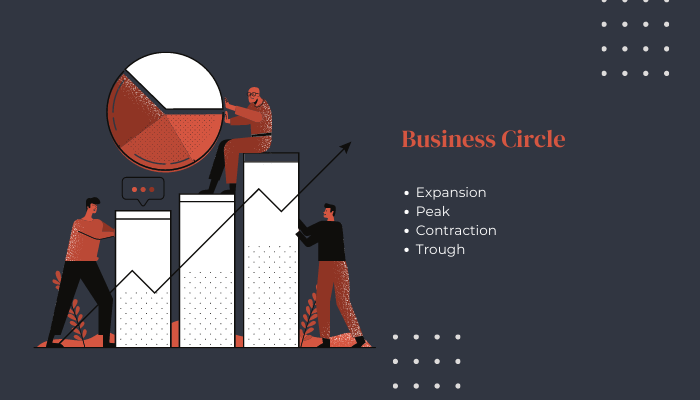 The stages of the business cycle are 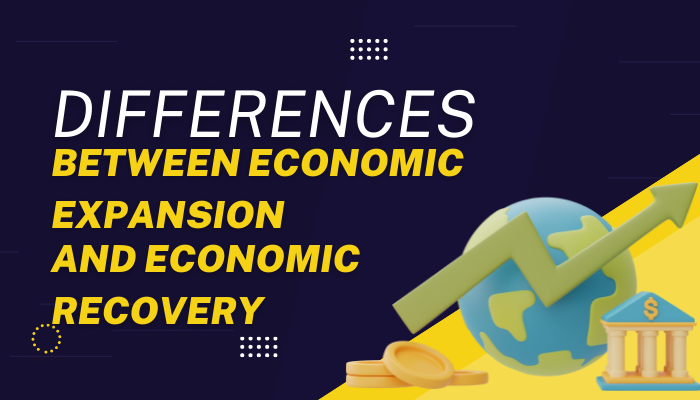 A complete business cycle consists of a single boom and a single contraction in sequence.

At this stage, the economy grows for two or more quarters in a row and there are transitions from a trough to a peak. Consumer confidence in the economy, increase in employment, and stable equity markets characterize this time. 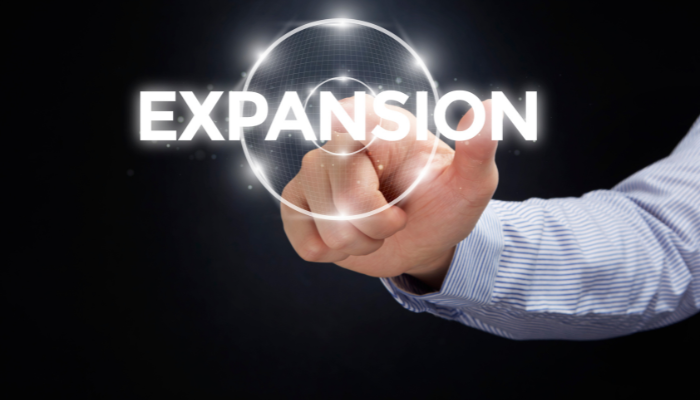 Expansions can span from a few months to more than ten years, but they usually last four to five years on average.

Policymakers, investors, and economists are all interested in business cycles. Potential investment possibilities and future trends can be identified using historical economic patterns.

Several significant factors might help anticipate whether or not an expansion will take place soon. The factors are

These indications can also be used to anticipate contractions.

Following a recession, the business cycle is marked by improved or sustained business activity, such as large growth in the gross domestic product, a drop in unemployment, and an increase in income. 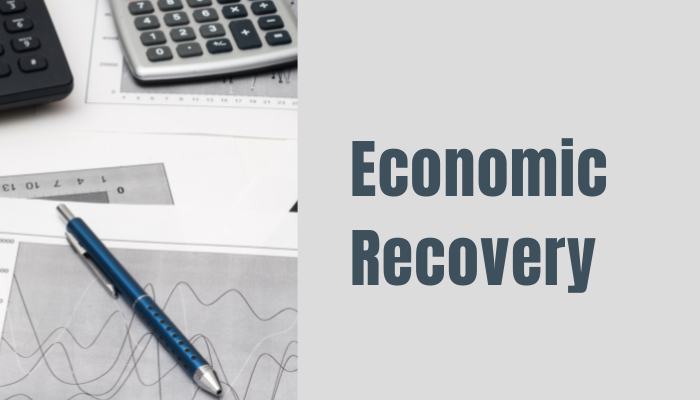 During an economic recovery, the economy adjusts to the central bank's and government's policies and rules, including the recession triggers.

It also entails re-purposing other productive resources in the economy that had been idle during the recession. This lays the groundwork for a new expansion.

The Impact of Interest Rates on Economic Expansion

The Federal Reserve will drop interest rates when the economy needs a boost, lowering borrowing costs. Businesses and people are more likely to spend their discretionary income as borrowing money becomes very inexpensive. 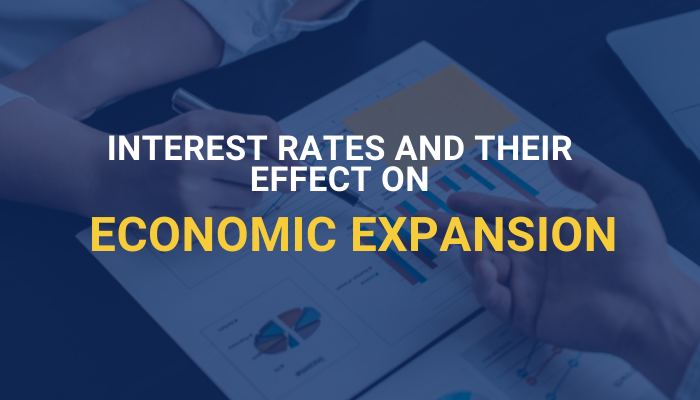 Saving extra money isn't a good idea under these conditions, therefore people and businesses boost their investment and expenditure.

The cheap cash flow will eventually raise the cost of spending or inflation, forcing central banks to raise interest rates and urging consumers to save. This has a detrimental influence on a company's bottom line, causing the economic cycle to tilt downhill.

The federal funds rate is mentioned frequently when interest rates rise or drop. This is the rate at which banks lend money to one another.

It can fluctuate daily, and because its movement has an impact on all other loan rates, it is used as a gauge to determine whether interest rates are growing or lowering. 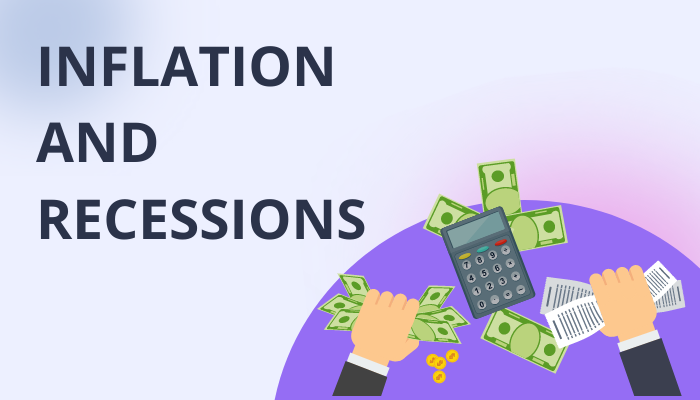 Both inflation and recessions can be affected by these developments. Inflation is the gradual increase in the price of goods and services. It is the outcome of a strong and thriving economy, nevertheless, unregulated inflation can result in a severe loss of purchasing power.

When these indicators begin to climb at a rate of more than 2% to 3% per year, the Federal Reserve will raise the federal funds rate to keep a check on increasing prices.

Between 1980 and 1981, a good illustration of this occurred. Inflation was at 14%, and the Federal Reserve boosted interest rates to 19%. This resulted in a devastating recession but put an end to the country's skyrocketing inflation. 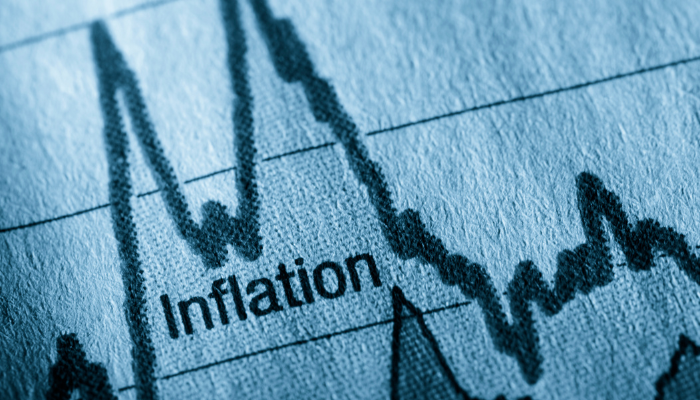 Similarly, the Fed has been raising rates throughout the year to counteract rising inflation in 2022.

Falling interest rates, on the other hand, can bring a recession to a conclusion. Borrowing money becomes cheaper when the Fed reduces the federal funds rate, which encourages individuals to spend again.

The following is an explanation of the economic cycle, the credit cycle, and the CapEx cycle:

The term "economic cycle" refers to the economy's swings between expansion (growth) and contraction (recession). 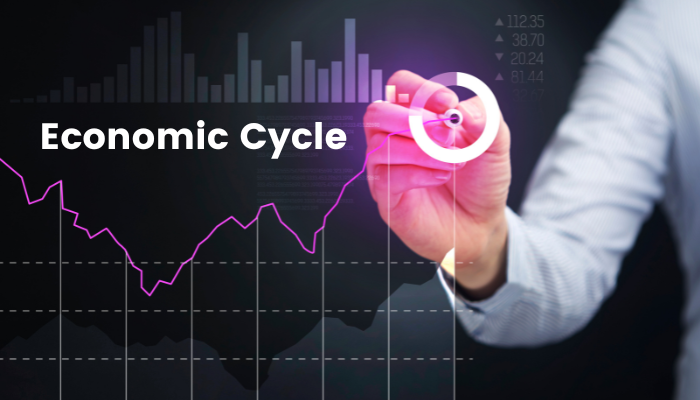 Gross domestic product (GDP), interest rates, total employment, and consumer spending indicate where the economy is in its cycle.

Because it has a direct impact on everything from stocks and bonds to profits and corporate earnings, understanding the economic cycle may assist investors and businesses understand when to make investments and when to pull their money out.

The circular movement of an economy from expansion to recession is known as an economic cycle, also known as a business cycle. Growth is the hallmark of economic expansion.

A contraction, on the other hand, results in a recession, characterized by a drop in economic activity that lasts at least a few months.

The stages of borrowers' credit access are described by a credit cycle. 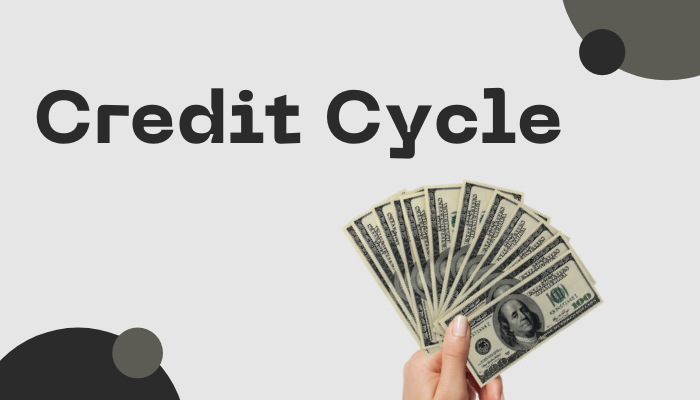 Credit cycles begin with periods when funds are relatively easy to borrow. These periods are marked by lower interest rates, fewer lending criteria, and an increase in the amount of accessible credit, which drive an increase in overall economic activity.

These times are followed by a decrease in the amount of money available. Interest rates rise and lending standards tighten during the credit cycle's contraction phase, implying that there is less credit available for business loans, home loans, and other personal loans.

The contraction period lasts until the lending institutions' risks are lessened, the cycle troughs and the cycle begins again with increased credit. 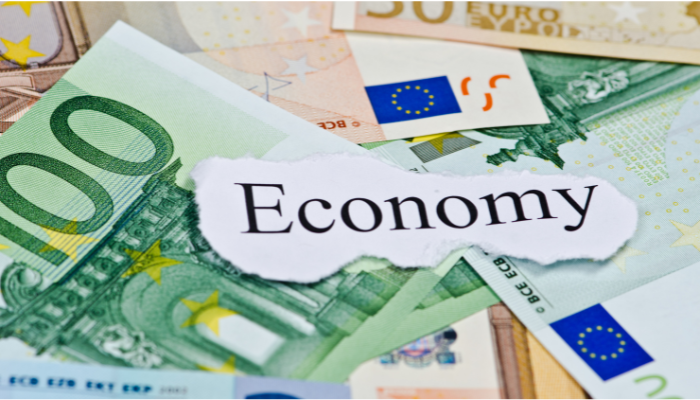 Money is freely flowing through the economy, businesses are taking out loans to expand, job prospects are improving, and consumer spending is skyrocketing.

Inflation will eventually grow as a result of the cheap money flow and the accompanying increase in expenditure, prompting central banks to raise interest rates.

Suddenly, the focus is on persuading individuals to cut back on their spending and slow down the economy. Revenues are down, stock values are down, and the economy is contracting once more.

The risk and profitability of the lenders determine credit availability. Lenders are more inclined to extend loans if the risk is lower and the profit margin is higher.

Risk lowers during periods of strong availability to credit in the credit cycle because investments in real estate and enterprises increase in value. As a result, corporate borrowers' repayment ability is robust.

Individuals incline more to borrow money to consume or invest because money is cheaper and their salaries are stable or rising. 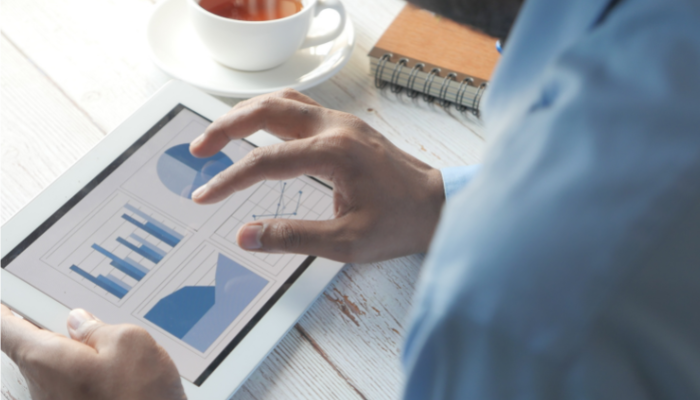 Banks tighten lending standards and boost interest rates because the chance of a borrower defaulting is larger.

As borrowers deleverage their balance sheets, this reduces the available credit pool and, at the same time, reduces demand for new loans, bringing the credit cycle back to the low access point.

Some economists believe that the credit cycle is an important aspect of the economy's wider business cycles. 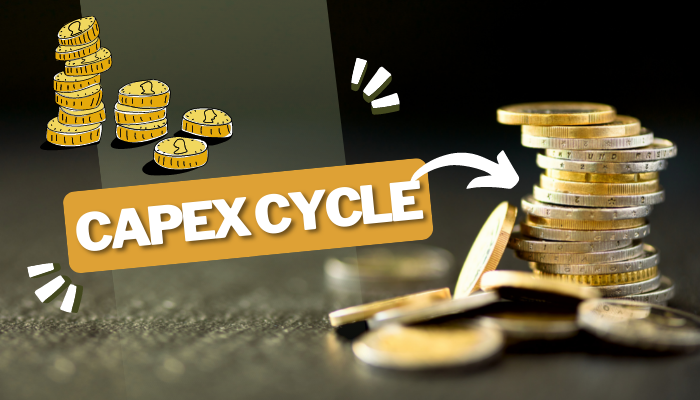 When the economy is doing well, people are buying, and financing rates are low, management teams frequently want to take advantage of the situation by increasing production.

Initially, this results in increased sales and reasonable returns on invested capital. Later, the competition becomes more intense, and greed begins to take its toll.