This is from NYT. What are everyones thought??

Yesterday, JPMorgan Chase's co-heads of investment banking, Jim Casey and Viswas Raghavan, announced policies aimed at improving working conditions amid record deal volume and banker burnout. The company has attempted similar things before. DealBook spoke with Mr. Casey about the latest plan - and whether this one will stick.

JPMorgan has recently hired 65 analysts and 22 associates, and plans to add another 100 junior bankers and support staff, Mr. Casey said. It's targeting bankers at rival firms, as well as lawyers and accountants interested in a career switch.

The bank will tell associates not to do marketing work on weekends. It will encourage all bankers to go home by 7 p.m. on weekdays and add more flexibility for personal time. It will also force bankers to take at least three weeks' vacation a year.

"It's not a money problem," Mr. Casey said, so there won't be one-time checks or free Pelotons after a rush. Junior bankers will get their share of the record $3 billion in fees JPMorgan earned in the first quarter.

Some things won't change. Because banking is a client-service job, managers sometimes have limited control over workloads and hours. "You might do 100 deals a year, but that client only does one deal every three years," Mr. Casey said.

How the bank will measure success: "Ask me what our turnover ratio has gone to and I will tell you," Mr. Casey said. The goal, he said, is "lower."

Can't wait to see all those new hires get fired once the cycle turns.

There are only two ways to permanently fix burnout:

1) Hire more people and once each banker meets their cap of max staffed deals, hire even more - unlikely to happen

2) Practice the phrase "sorry mr. client, but we currently don't have the resources to support your new engagement so we will decline the pitch" - will never happen

"I don't know how to explain to you that you should care about other people."

Eh. I respectfully disagree. Bankers just have to change the way they pitch and make decks more efficient, and to a lesser extent use better technology. I used to win strategy consulting contracts with a one-pager "placemat" style pitch, so seeing 150 slide pitchbooks in banking still makes me cringe. Really unnecessary amount of work is being done in my opinion.

Yes, easier said than done. But easier to make the work more efficient than turn it down altogether, or make hires.

Be excellent to each other, and party on, dudes.

This is exactly right, and I say that as someone who switched to the client side and gets pitched all the time. The amount of pointless noise in the average book is still way off the charts. Endlessly refined tombstone pages, long form models, gigantic books that I don't want to sit and page turn with you, etc. etc.. The best bankers talk less and listen more. Show me a few good ideas at a high level. If I like any I'll tell you, and then come back with a deep dive.

As long as clients fall for shit like this (i.e., being impressed by 100 page decks where 20 pages are relevant and 80 pages are a mix of alphabetized logos and gibberish math gymnastics, senior bankers will keep doing what they do).

The firm I'm at has done exactly that this past year. Probably harder to squeeze extra juice out of your junior people in consulting since junior consultants don't usually get put on multiple projects. Unless you're at ZS.

The point is you shouldn't be in this industry if you aren't excited about handling 1 transaciton.

If the goal is that folks are working on 1 live deal at a time vs. 3+ (drowning), then that just might work.

...But if you are working on only 1 live deal and you don't want to grind to get it done, then you probably shouldn't be in this industry (won't be worth it from a learning perspective + pay will undoubtably come down w/ more head count)

This is a good point. Ultimately I guess hiring more people averages things down since when deals aren't at their peak there's just more work spread to more people, so maybe I'm wrong here. Any progress is good progress.

I realize you can't put 10 analysts on a deal, but my worst weeks in banking were always when I had a big task that I wouldn't even start on til after dinner, because the workday was tied up with Deal 1, 2, 3, etc. Less deals per man, less work.

"I don't know how to explain to you that you should care about other people."

What gonna happen to bonuses though?

what do you think? same pot of money divided among more people each of whom works less.

I think banks are all aware that they're losing talent to tech, PE, asset management. Undergrads and grad students are looking elsewhere as they have different values than the generation below us, and turnover is incredibly high.

I genuinely believe that over the next decade, you will see real improvement, but that can really only be done by keeping a larger workforce and changing compensation to MDs to be incentivized by the WLB of junior bankers.

If the MDs are solely incentivized by bringing in revenue, they are going to use their resources (junior bankers) as much as they can. So through this plan I wouldn't be surprised if JP's employees had a better WLB than before, but it's still banking and you should be ready to grind out 100 hour weeks if needed for a big live transaction for the firm and client.

Targeting lawyers and accountants? Any junior lawyer worth their salt is already making $200k straight out of law school with guaranteed lockstep salary bumps every year and accountants come from strictly non-targets and act like the world is burning down for having to work more than 60 hours a week (doing routine tasks) for 4 weeks a year.

From what I've seen, these mass hiring efforts bring in a lot of people who would normally not be hired and end up frustrating the existing team, thus leading to even more departures.

This might sound unbelievable since we earn so little but as a former big 4 audit accountant 100 hour weeks are not uncommon and we spend this time with people that are more boring than in banking. I will tell you that accountants will be able to make this switch easily, I did and I have never looked back. Granted I've only been here for a few months

Why do accountants put up with such high hours for such a low pay?

Being from a target school is not a skill. If investment banks hired seasoned big 4 accountants for associates and analysts roles, (as oppose to a Princeton French major) maybe the burnout rate would not be so bad. 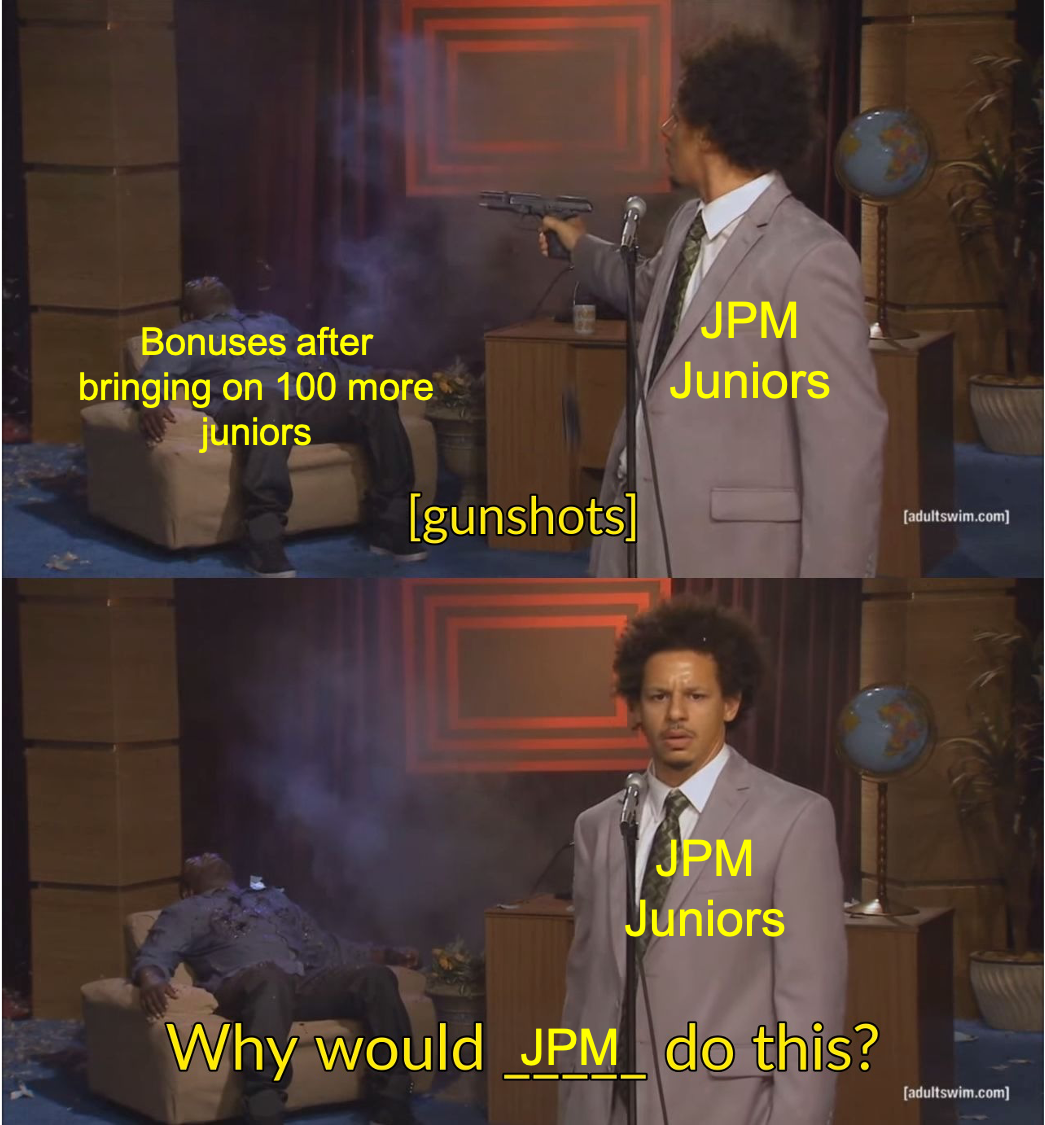 Hope this ends up working. JP is well-respected, he's been at JPM for decades. Has definitely seen his fair share of long hours. Worked in the DCM trenches before moving up the ranks.

Wait wait wait. April fools was like 3 weeks ago

In all seriousness, many firms are trying to find solutions to end burnout and other similar things going on with their Analyst/Associate classes.  I really hope this works, but I feel this is a step towards the right direction for the firm.  This could also be used as an example to other firms as well.  As people get hired/laid off, the levels will stabilize until work is allocated properly and things run smoother.  As always, patience is key.

Didn't other firms exercise salary and bonus bumps to retain their current classes?

fuck you and your patience

JPM IB is dumping their small to mid size client pitches, roadshows, and bake-offs on CCBSI Analysts and Associates. CCBSI is quitting in droves now that they have IB deliverables and an IB schedule without equivalent compensation

Would be curious to hear more about this sentiment. I recently turned down a CCBSI superday after moving to a no name boutique. Had my doubts but I've only heard worse and worse things about this group

I can't believe they still consider CCBSI commercial/corporate banking. Group wears way too many hats, and also are required to push IB work through.

The naivete is adorable