Why do bankers think they are superior?

Fwiw, I'm a junior banker. After interacting with people in the industry, either at work with my seniors or with a couple of remote family connections who are now VP/EDs, I cannot but notice that quite a feel somehow think they are superior to other people.

I know that ib gives you some healthy $ to live by. I also know quite a few small and medium business owners who, while not Bill fucking Gates or some Musk dude, make roughly the same as an MD at a top group or more. They don't need to pull deals constantly. Some of them have pretty chill lives.

It's just a job. Yes, it's a good job, but it's only one aspect of a human being.

because bankers are doing God's work

Damn straight we are 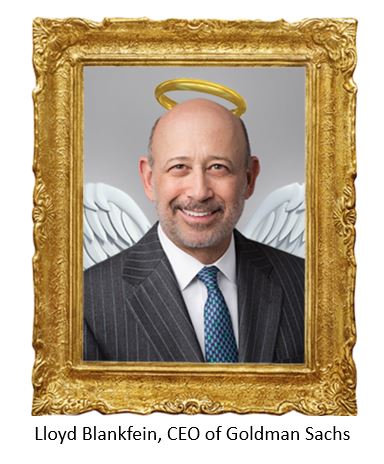 I think this may be more dependent on personality than income.

Because synergies ain't gonna be estimated themselves, asshole.

ironically most synergies are estimated by the consultants and not the bankers...

Because they were likely beaten up a lot in school and now want to sublimate their abuse in a non-physical way towards others.  And also, they likely have small pensies.

1.  Better educational background i.e. I went to Harvard you went to a state school so you're a peon....this is enough for some people

3. Size of transactions - I closed a $5 billion dollar deal while other people think 6 figures is a big number

4. Prestige whoring gets to people - Working at JPM, GS, etc sounds cooler than being the financial analyst for the Dress Barn

5. Pay -  Despite the hours, you get 6 figures at a young age so you must be an evolved human being

6. Selective process to get the job -  hundreds apply only a few get in...must make me special.

Yeah and we just have a way bigger dick too so

People would be shocked by how many of the small business owners and car salesmen in your communities make more than the average partner at Blackstone.

I highly doubt small business owners make $1 million+ consistently, and that's after working at the business, assuming the risk/liabilities, and having capital invested. You always have to worry about competition, economy, and depending on the industry, regulations.

For context, I make $500K, no financial risk or investment. I average 70 hours per week, work from home, and have certain perks business owners don't get (meals expensed, 401k match, healthcare plan, etc.). The execs at my IB can worry about competition, market conditions, and regulations. If I get laid off or fired, on to the next gig (after collecting some modest unemployment in between).

Don't even get me started with car salesman...

All of these are so true. It's human nature to feel that way even though it's dumb. And agreed based on my past experience that bankers typically tend to feel that way towards non bankers. What's interesting is that many of them also tend to drop that attitude real quick when they talk to PE or HF people, presumably because they think PE/HF is all of what they have and some. I don't agree with that. It's a job at the end of the day, but that won't change people from feeling how they feel.

similar to #4, it's how much people kiss up to them. I've had people kiss up to at a MM IB as an analyst, I can't imagine what that's like for more senior people at BBs. Also remember during OCR, being in conversations and having others just start sucking dick of the VP.

It is good to see how people react to this, since you don't want to work anywhere where this is actually an accepted/good thing. I personally hate when people suck up to me and it's only been happening more since I've been on the buyside.

This was very insightful, thank you Monty!

you're welcome.  its a job..that's it.. and really not even a great job.. its a very good job with a very clear path to the top if you can stay on the treadmill

Who knows? They make shit loads of money, but life is all about happiness per hour. And that ratio is def low for them.

very good point.. i want to make the most money working the least amount of hours

Because if they didn't it'd be tough justifying why they're spending so much time in a cubicle instead of trying to fix the shitty components of the rest of their lives.

Bankers are mostly WASPs who went to WYD/Oxbridge or some other ridiculously tier 1 school and are set to inherit 9 figures, now tell me why we wouldn't think we're heaven sent

I don't know what there is to be happy about being a WASP. Y'all got some of the blandest food and blandest lives I've ever come across.

Fwiw, I'm a junior banker. After interacting with people in the industry, either at work with my seniors or with a couple of remote family connections who are now VP/EDs, I cannot but notice that quite a feel somehow think they are superior to other people.

I know that ib gives you some healthy $ to live by. I also know quite a few small and medium business owners who, while not Bill fucking Gates or some Musk dude, make roughly the same as an MD at a top group or more. They don't need to pull deals constantly. Some of them have pretty chill lives.

It's just a job. Yes, it's a good job, but it's only one aspect of a human being.

This is common in almost any field you go into even some priests.

Because they can swing their big dicks.

Because they can swing their big dicks.

Because we're the only people who have jobs that matter. Everyone else can take PTO for 8 months out of the year and no one notices.

mergelord11Because we're the only people who have jobs that matter. Everyone else can take PTO for 8 months out of the year and no one notices.

Have you worked with Engineers, Scientist and none finance companies CEO's, lawyers etc ?

They make enormous sacrifices in terms of free time, mental health, and physical fitness so they need to convince themselves that they're a highly evolved form of life to justify those costs.

Said ED at a top group is a remote family friend. She's 40 now. Still single and I think somehow she despises men. I only met her twice but my gut tells me she actually hates men for some peculiar reason.

They make enormous sacrifices in terms of free time, mental health, and physical fitness so they need to convince themselves that they're a highly evolved form of life to justify those costs.

I think this is the right answer. People -- all people, not just bankers -- have a need to feel like the choices they've made throughout their lives were the right ones. When presented with evidence to the contrary (i.e. hey did you realize that there are people who make as much as you or more, with a higher quality of life and with fewer sacrifices along the way?) they'll squirm and figure out a way to balance the equation ("but my work is more impactful" or "yeah but they got really lucky" or "but my risk is lower" and so on).

If the equation doesn't balance, then they'd have to come face to face with the realization that they could have made different choices that would have been better for them, and a lot of people can't actually face that reality. It's funny at first and then really sad watching someone's brain melt when they run out of arguments and see the truth.

I'm not saying being a banker is a bad choice, by the way. It's a great option for someone with a certain skillset and drive and interest in the nature of the work and the clients. But that's a smaller population than the total number who make the choice.

You see the same thing with young kids who join the military. "I'm miserable and suffering more than those kids in college therefore I am better than them."

OP here. That "justifying mindset" happened to my ex-girlfriend, who is a senior associate (I'm an analyst). I think it's safe to say she somehow makes herself unbearable to a certain extent. For example, when we had dinner at a place that's ~0.5 miles from where she lived, she wanted to Uber instead of taking a walk. That was the norm and I don't think it's right.

I think the superiority complex happens more easily to those who come from normal family backgrounds because it's hard to maintain your cool when you see all those $$$ coming out of that kind of background. That can make someone socially repulsive fast.

Guys, what do management consultants have to say about this?

I responded above (I'm a former MC) but the OP's observation can be said for many MCs at the principal/director/whatever level as well. I'm convinced that a large % of folks who make it that high have multiple diagnosable personality disorders.

At the lower levels in MC it might not be as bad as the lower levels of IB, since so many people enter MC intending to jump ship after 2-4 years. I think IB has more of a hardo type of mentality at the more junior levels that you don't see in as concentrated a form in MC.

Touche. I was just being facetious. Appreciate the detailed response though. SB for you sir.

You have power in a company that many Ivy League grads are dying to work at. You can make these ppl work insane hours on whatever you want. You might have a rolodex that includes CEOs, PE partners, law partners etc.

Also part of your job is banging on doors and getting in front of ppl telling them how you are best to represent them. That attracts a certain personality

I am always surprised at how many people in IB I've met that drank the Koolaid (and shotgunned that shit down their golett at that). And the end of the day I think people become consumed with their job due to the hours, early recruitment, and stress. It becomes the whole personality of some people and that naturally leads to thinking you're better than those which aren't solely focused on their careers.